As we approach the political conventions of our major parties—the once-every-four-year summer spectacle that coronates our presidential nominees—rumors are flowing freely about who will be selected as vice president. Speculation about veep choices is attracting more attention than usual, however, since neither Donald Trump nor Hillary Clinton is exactly young, and both have a record of gaffes and screw-ups that could very plausibly lead to their Number Two taking over the White House.

So, who winds up as the vice presidential choices of this year’s nominees could actually matter for our country quite a bit. It therefore says something significant that both Trump and Clinton want it known they’re pondering senior military men—not just the usual seasoned politico types—for veep. Let’s take a look at who they’re considering.

The most interesting possibility is Mike Flynn, a retired army lieutenant general who’s been close to the Trump campaign from the start. His name has been frequently mentioned in the media as a potential running mate for Trump. Flynn is a far from conventional choice. In the first place, he was a career intelligence officer—not a combat arms guy—and his tenure as chief of the Defense Intelligence Agency was cut short in 2014 when he was cashiered by President Obama.

General Flynn has worn his firing from DIA as a badge of honor, claiming the White House canned him because he demanded that the truth be told about the rise of Islamic State. In Flynn’s account, Obama refused to take jihadism generally and ISIS specifically very seriously, and the DIA director’s hardline on these issues led to his firing.

While it’s undeniably true that Obama’s take on jihadism and ISIS is far from reality-based, as I’ve explained many times, Flynn’s version of events is at best a half-truth. Some of it seems to be based on hurt feelings that the White House never took Flynn as seriously as he takes himself.

Yet Flynn’s dismissal from DIA had more to do with the general’s poor leadership style than anything about ISIS. Flynn had a fine army career, including a successful tour as the intelligence boss of our Joint Special Operations Command—the famously spooky JSOC—but he was simply promoted beyond his level of competence.

DIA has always been an also-ran in our Intelligence Community—a dumping ground where military careers go to die more often than prosper—but Flynn believed he could be the boss who turned DIA around to match CIA and NSA in the Washington spy game. Alas, he was wrong.

The civilian workforce at DIA is uninspired even by Beltway standards, and they objected when Flynn repeatedly threatened them with firing if they didn’t submit to his radical plans for the agency. It turned out Flynn was better at thinking about Big Ideas than actually implementing them, and his reform plans for DIA went essentially nowhere.

After two years under Flynn, DIA employees had enough and were in more-or-less open revolt. The final straw came with a bizarre presentation to the workforce by a staffer which encouraged women to not be “Plain Jane” and wear makeup at work: “No flats…Paint your nails…Brunettes have more leeway with vibrant colors than blondes or redheads.”

Although Flynn apologized to his agency, the damage was done. The White House had no choice but to move him out, along with his deputy—a rare move in the Department of Defense to cashier a whole leadership team.

It seems that Flynn remains furious at Obama for firing him, and that anger may be the driving force behind his cozy relationship with the Kremlin. General Flynn has frequently appeared on RT (formerly Russia Today), the Russian government’s news channel aimed at the outside world. RT is unadulterated Kremlin propaganda—not a normal news network—as evidenced by its showcasing avowed neo-Nazis and having its own Illuminati correspondent.

Since Flynn is a Cold War veteran and a career spy, he knows exactly what RT is—he has no excuses. Yet this has not deterred him from appearing there regularly. To top it off, last December he attended RT’s 10th anniversary gala in Moscow, including a photo op with President Vladimir Putin.

It’s safe to say Putin would have a word for any top retired Russian intelligence general who regularly appeared on official U.S. television and did a photo op with President Obama. It’s not a nice word, and that general would be well advised to avoid drinking tea.

To make matters worse, neither General Flynn nor RT were willing to comment if he is a paid contributor to the network. If a possible vice president is an actual paid employee of Vladimir Putin’s Kremlin, that seems like something the American people should know.

The last thing the Trump campaign needs is more senior staffers who are publicly cuddly with Moscow, so perhaps that’s why speculation about Flynn as veep has gotten quieter in the past couple days. Yet we’re hearing rumblings about other generals, including Stanley McChrystal and James Mattis.

Stan McChrystal, a retired army four-star, had a superb career in special forces, including heading JSOC for five years. However, McChrystal fell from favor due to an ill-advised appearance in a notorious Rolling Stone piece in 2010 that trashed top Obama administration officials. Since McChrystal in retirement has spoken against assault weapons in a manner that would upset many Republicans, perhaps it’s just as well that he’s said he wants nothing to do with the Trump campaign.

An even wilder card is Jim Mattis, a retired Marine four-star and arguably the finest American general of his generation. A true warrior-scholar who can talk like a grunt or a professor with equal credibility, depending on his mood, Mad Dog is a street fighter who’s lionized by our forces. His integrity is beyond question, and his dislike of President Obama is sincere, if more measured than Mike Flynn’s.

Unlike Flynn, Mattis actually was fired by the Obama White House over principle. As our military commander in the Middle East, General Mattis posed a serious stumbling block to Obama’s nuclear deal with Tehran, so the president unceremoniously fired Mad Dog in 2013. A class act, Mattis has refrained from commenting publicly on the sordid affair.

Just this spring, General Mattis was touted as the last hope of the #NeverTrump faction of the GOP, but demurred from getting involved in politics, so it’s difficult to imagine why he’d want to sign on with Team Trump as second fiddle. That said, if Donald Trump wants a military man as his Number Two, he can do no better than Jim Mattis.

Not to be outdone, the Clinton campaign too is reported to be flirting with a military man as veep—in her case, it’s James Stavridis. He’s a retired navy four-star admiral with a stellar reputation. After a career driving ships, he headed up two of the Pentagon’s combatant commands back-to-back: Southern Command (for Latin America) then European Command (which is dual-hatted as the Supreme Allied Commander Europe, in other words the military head of NATO).

Admiral Stavridis is a smart guy and in retirement he’s headed up the Fletcher School at Tufts University. He’s also friendly, unassuming and down-to-earth. If Hillary wants a military veep, it’s hard to see how she can do better than Jim Stavridis. In truth, he’s too good for Team Clinton, with its slimy ethical problems and dereliction of duty in national security, as demonstrated by EmailGate.

But the real question is why our next president feels he or she may need a retired general or admiral as deputy. Sure, Hillary’s national security credentials are iffy, while Trump’s are nonexistent, but are generals and admirals the best way to strengthen that important issue?

This is hardly a new temptation. Back in 1968, the third party sensation George Wallace selected Curtis LeMay as his running mate. A retired air force four-star, the fire-breathing LeMay was famous for heading up Strategic Air Command, our nation’s main nuclear force, at the height of the Cold War, and he publicly pondered dropping atomic weapons on North Vietnam while “bombing them back to the Stone Age.”

Things went only marginally better for James Stockdale, the running mate of Ross Perot in 1992. A retired navy three-star who received the Medal of Honor for his conduct during almost eight years as a prisoner of war in North Vietnam, Admiral Stockdale was a bona fide war hero plus a military intellectual of sorts. Smart and self-deprecating, he rhetorically asked during a veep debate, “Who am I? Why am I here?”—which only confused much of the American public.

If Trump and Clinton are serious about choosing a military man as their running mate, the past suggests the proposition may be risky. Our military remains an object of veneration by many Americans, who see it as one of our few national institutions that remains fully functional and dependable. Yet it includes plenty of time-servers, pedants and bureaucrats, too—including in the top ranks. Be careful which general or admiral you choose, since that person could very plausibly be our future president. 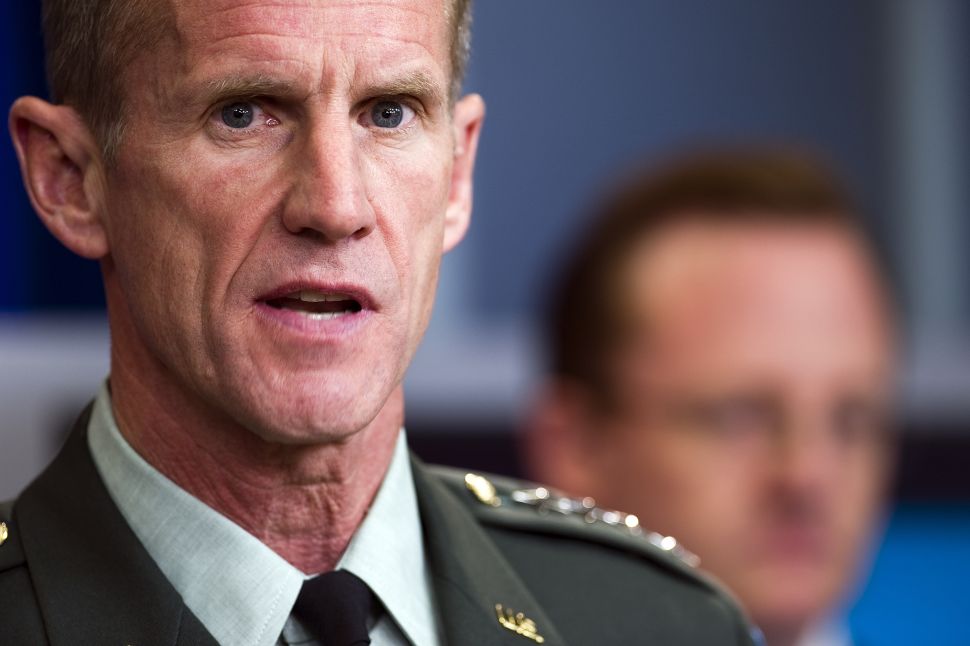