“A prison of my own paranoia”

Mr. Robot has never been shy about the influences Fight Club, both the Palahniuk novel and the 1990 David Fincher adaption, has on the series–in everything from tone, to aesthetics, to story. But if the first rule of Fight Club is “You Do Not Talk About Fight Club,” the first rule of Mr. Robot is “You Do Not Know How To Talk About Mr. Robot.” Over the course of one full season and a handful of season two set-ups, Sam Esmail and company have constructed a well-oiled mind-fuck, to the point where we trust nothing we see, nothing we’re told, and nothing we could guess.

Which is why the ending to last night’s installment, “eps2.1_k3rnel-pan1c.ksd”, is so damn pitch perfect. FBI Agent Dominique DiPierro, played wonderfully stretched between order and chaos by Grace Gummer, spying the not-so-subtle F/Society base that’s been in front of us since episode one: “You’ve got to be fucking kidding me.” That’s the marvel of the environment Mr. Robot has cultivated; so often are we looking for clues, for hints, for nods to a grand, dark conspiracy that we miss the obvious signs strung up in neon lights.

But first, some things that most definitely happened entirely in Elliot’s brain: A gang of men dressed like a cross between background extras from Men in Black and The Adjustment Bureau, did not tie Elliot to a chair and physically force cement down his throat in order to flush out the vials-worth of Adderall pills in his stomach. For one, there are far less complex ways to get a person to throw up pills. Trust me. But really, the cement sequence is the clearest indicator of the battle happening in Elliot’s head. It’s Elliot’s laundry list of fears–paranoia, being watched, followed, and ultimately caught, physical sickness–rolled into one nightmare scenario and we know Mr. Robot reads that list every day. “I have burrowed underneath your brain,” he tells Elliot. “I am the scream in your mind. I own you.”

And now, for some things that most definitely actually happened, as much as I wish they did not; Elliot did in fact scramble to eat his own vomit in an attempt to Adderall his hallucinations away. Visually, this was as disturbing a set-piece as Mr. Robot has offered so far, including the time Elliot tried to make out with his sister. But as a whole, taking into account performance and sound and context, this scene was just so…darkly funny? The accompanying music, always on point in this show, was so inappropriately uplifting it made scooping up handfuls of your own throw-up into your mouth look like an Olympic sport. The look on Elliot’s face by the end–God, he was so satisfied with himself–mingled with the pure disappointment of Mr. Robot was both an uncomfortably humorous cap on an already vile scene and a reminder that in addition to being a world-burning megalomaniac, Mr. Robot is also an embodiment of the father Elliot never earned the approval of.

This was a reminder that Mr. Robot has never been afraid to mine humor from its stone-faced premise. Never so much was this on display than during Elliot’s six-day Adderall bender (Fact-checked: he was still five days short of the real-life record for going without sleep). As someone who is no stranger to both concentration medication and lack of sleep, I can attest for the symptoms–the blurred edges, the increase in speech and decrease in clarity, the detachment from reality, like a computer running its hardware too hot. But what a delight to see Rami Malek unhinged for a change, speaking at an uncharacteristically rapid pace (“That’s classic George, right?”), screaming “WOOO SLAM DUNK” a week after mumbling about the pointlessness of sports and, most jarringly, smiling.

And you have to wonder: Is this the person other people see when they meet the strangely charismatic Mr. Robot?

It’s hard to say, because it’s hard to trust reality inside the world of Mr. Robot. With that said, we have to discuss an idea that I’m not the first, nor most likely the last, to posit. The idea that Elliot Alderson is in jail. At the very least, a psych-ward.

It makes sense. Really, go back and watch the premiere and this episode with this in mind. Elliot’s perfectly arranged schedule: He wakes up every day in his square room to the sound of his “mother” sliding his door open, the same mother that spends her days watching a small television set, only interrupting when his “meeting” with Gideon got too loud (She might as well have yelled “No touching!“). He eats in the same place, a mess-hall-like diner, at the same time every day, with the same person. His time spent outside, his only time spent outside, is at the same basketball court, watching the same people. The only interruption of this schedule was the brief threat of a fight between the basketball players and Leon, which was immediately broken up by Ray and his dog, a bloodhound. Tell me Ray isn’t a prison guard. It makes sense.

There’s more: Elliot receives his call from Tyrell Wellick not on a cell, but a red corded telephone in a hallway lined with bar-like wallpaper. Ray somehow gets the notebook Elliot leaves in Bible study, as if the therapy session and the diner are in the same place. The signs are there.

But should we trust them? It’s like the F Society letters, hanging over Coney Island in broad daylight. We’re supposed to see them, but to what end? Clue, or distraction? Remember when it slowly became obvious that Mr. Robot wasn’t real, that he was Elliot’s own personal Tyler Durden, and just when we were satisfied at our detective skills BOOM Darlene is also Elliot’s sister? Mr. Robot zigs whenever you want it to zag. Maybe Elliot is in prison. Or maybe we’re supposed to think Elliot is in prison. Or maybe the real fun is in how aware this show is of its ability to tease. “I’m not gonna let you make a prison of my own paranoia again,” Elliot says to Mr. Robot, early in the episode.

To that I say: You’ve got to be fucking kidding me.

“Fuck, Darlene…what did we do?“

Romero, F Society’s resident pot-dealer and eater of donuts, was murdered in his own weed sanctuary, which is so emotionally devastating because amid this show’s onslaught of coolness, Romero was somehow the coolest character. Alas, as he himself would say: “Don’t try and sweet talk me motherfucker, you don’t gotta tell me I’m the best in the game.”

Romero’s death, tragic as it is, opens up multiple interesting alleyways going forward. Was he killed because of his drug connections, or by F Society’s hack-parters The Dark Army? Or, third option, did Mr. Robot, and by proxy Elliot, have him killed?

There’s motivation for all three, but the Fun Society letters point most glaringly to Elliot. Once again, there’s evidence, taken from TV’s greatest hint-factory: the “previously on” montage. This week, we see a close-up of Mr. Robot whispering to Elliot “Gideon is going to rat you out.” BLAM, jump-cut to Gideon taking a bullet through the neck. A long history of mafia television and film has taught me that just because a person is in prison, does not mean that person can’t have someone killed. And as Mobley pointed out, Mr. Robot already stuck a gun in Romero’s face once for disloyalty. Is it possible he finally, with someone else’s hand, pulled the trigger?

But you also have to imagine the Dark Army, led by the wonderfully time-obsessed, cross-dressing White Rose (B.D. Wong), has to come back into play eventually, especially if you, like me, remember very recently that season one ended with the Dark Army pal’ing around with Evil Corp CEO Philip Price.

And if this episode is anything to go on, Price has a plan, albeit an unclear one, and it involves Angela. Where I originally thought Price was pulling a Roger Ailes on Angela with his dinner invite, this show once again pivoted to something more sinister: A CD, offered to Angela, that incriminates two men involved in the sewage leak that killed Angela’s mother. A deal from the devil, yes, but a hard one to turn down.

It’s interesting that every character outside Elliot’s orbit–Darlene and the rest of F Society, Angela, Dominique DiPerrio–are all slowly but surely becoming locked in situations vastly out of their control. Elliot might be the one actually in prison, but that doesn’t mean he’s the only one whose trapped. 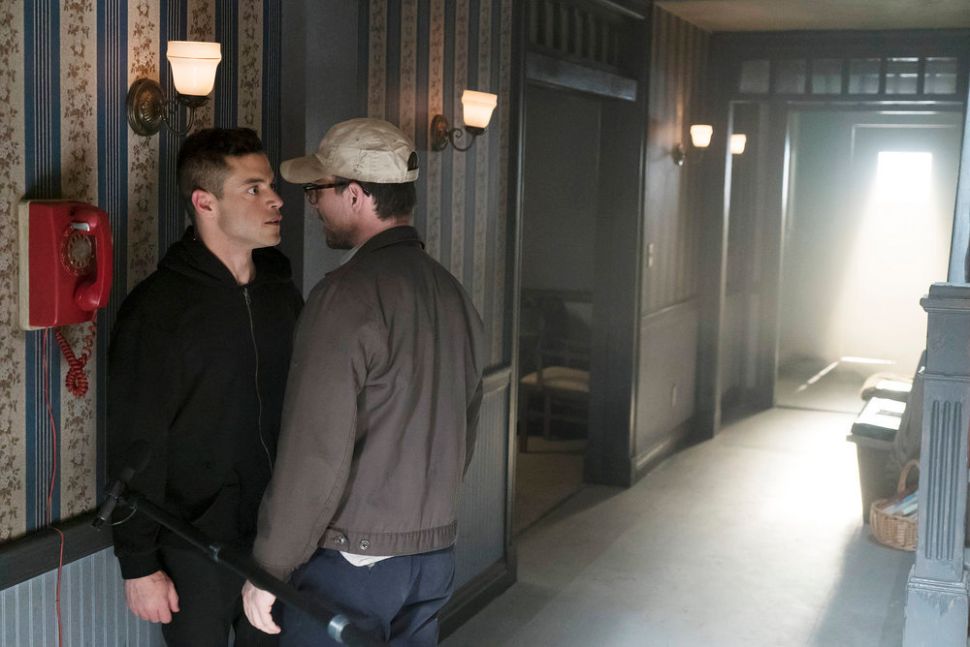