I know before I ask “What is art?” that the answer will be, “Art is subjective, and many things can be labeled as art.”

How about, “What gives art value? Is art worth something only if the artist who created it is famous?  Is it good because a famous artist did it?  Or, does it have value because a skilled artist with years of experience created it?

I ask this because I am an artist and I believe that art has value and the artist deserves respect. I have drawn and painted hundreds of caricatures and portraits for many publications, and one of the best parts about doing the work that I do—besides getting paid to do it—is the respect I receive from art directors, editors, readers, and fans.  It’s a great feeling knowing that people value what I do as an artist, it encourages me to work harder to become the best artist that I can be, not only for myself but for those who support me.

This past week, a fan of my work sent me a link to an iPhone app on iTunes called “Trump Slots,” featuring an image of Donald Trump and Hillary Clinton. This fan sent me the link because they saw the image and knew right away that the Trump looked like a Trump that I had painted for the cover of The Utne Reader back in 2010. When I opened the link, I couldn’t believe what I saw. It was in fact my artwork, repainted but nonetheless, my artwork.

Hundreds of caricature artists could draw Trump using the same reference as I did and every one of them would be different. This was not a coincidence. You can actually lay the art on top of my original and see that the proportions are exactly the same, all the way down to his hair, which did not look like that in the original reference but was painted that way for additional humor. The “new” version even portrays sweat dripping down the side of his cheek, which was also an original idea of mine, not found in the references I used.

I have been working as a professional illustrator for long enough now that I have developed a following and many of my caricatures are known and recognized around the world, including my painting of Trump. So I find myself wondering, why didn’t they just hire me in the first place rather than steal my art for their profit? I find it very frustrating that a gaming company that employs artists to work for them doesn’t seem to value or respect artist and their work. Maybe you’re thinking, why is it such a big deal? Being an artist is not hobby for me, it’s how I make my living, how I am able to take care of my family. My art is unique and original and that didn’t come easy, it is a skill that I have worked very hard to develop. When a company so boldly rips off my work, I take it personally.

I believe to be successful in anything, you need to respect and value others and you have to also respect and value yourself as well.  Clearly this company does neither. They had a dumb idea for a game and wanted to get it out in time for the Republican Convention so they could make a few bucks, while not having integrity enough to care about their image and what it might say about who they are.

Meanwhile, I have contacted the developer, someone called chang lin He (and my agent) is also trying to reach Apple.

Jason Seiler’s work has appeared in TIME, Rolling Stone, Billboard, The New Yorker, The New York Times, The Wall Street Journal, Business Week, The Weekly Standard, MAD magazine, The New York Observer, and many others. Jason helped design characters for Tim Burton’s Alice In Wonderland, including the Tweedles and the Bandersnatch and he has published three books: Caricature the Art of Jason Seiler, the coffee-table book, SEILER 2008-2009, and most recently, The Complete Artist. 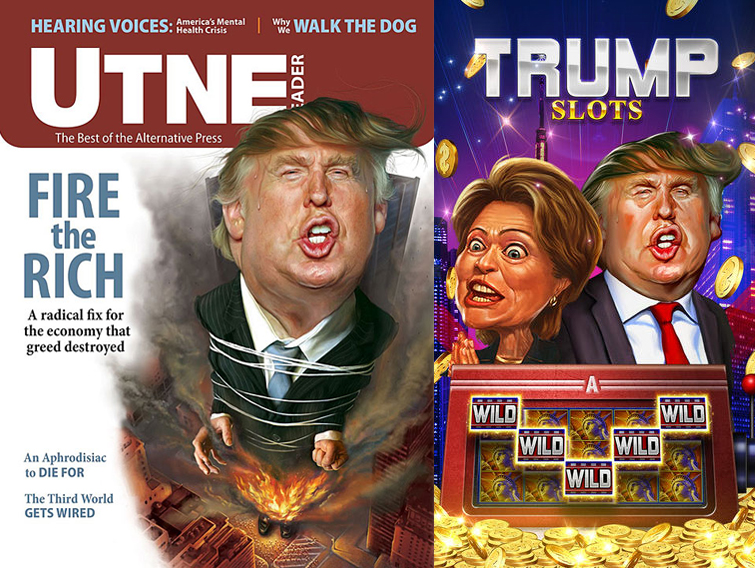