In New York there a few creatives as connected in contemporary art, fashion and interior design as Maria Brito. It is in her role as a curator that Brito brings New York to Mykonos with Greek Gotham, a tightly organized, thematic exhibition of painting and sculpture by 16 New York-based artists. For the summer, the works will be housed in the Dio Horia, a gallery and art platform that opened in 2015 in a typically Myknonian whitewashed building on the island’s Panahra Square.

As the title suggests Greek Gotham links the long cultural history of Ancient and Hellenistic Greece to the more compressed but no less influential contemporary New York art scene. Brito studied the history of Greek and Hellenistic culture and philosophy, refining a central argument that the impact of millennia of Greek cultural achievements is analogous with New York’s role as a major center of contemporary culture.

In the exhibition catalog Brito pairs each artist with a Greek term that has a philosophical, literary, or aesthetic cognate in English:  artists assume vivid astro focus are paired with Satyricism, Nina Chanel Abney with Democracy, Nir Hod with Metaphor, Mira Dancy with Lyricism. By juxtaposing New York and Greece, connecting the art and ideas of one culture to another across centuries, millennia, and geography, Brito uses culture itself as metaphor. “The exhibition is more about showing an underlying theme rather than making too direct or fixed a connection,” she told the Observer. Raúl de Nieves, a Mexican born, Brooklyn artist whose work involves issues of gender and sexuality and who creates sculptures and costumes derived from his performances, is paired with Polyphony, which is defined as the style of simultaneously combining a number of parts, each forming an individual melody and harmonizing with the other. Erik Parker, whose painting Hello (2014) blends a cacophony of references from expressionism to pop, hip-hop to heavy metal, is assigned to syncretism, a term often used to express a blending or fusion of religious or cultural practices. The term can be applied to Brito as well. “Maria is good at connecting the dots of how things move around in our culture, in fashion, music,” Parker said.

A cultural powerhouse with indomitable energy, Brito has created a name for herself as as art advisor, accessory designer, author, and curator. Check her blog http://blog.mariabrito.com/ or Instagram feed to witness a prototypical New Yorker on-the-go, visiting artists’ studios, attending museum, gallery openings, and international art fairs. Her personal style pulses with a New York urbane palette, the bold, bright colors of Neo-Geo and Neo-Pop artists she collects and champions. For her art-inspired accessory collection of clutches, bags, and scarve, she collaborates with a range of emerging and established New York-based artists Nir Hod, Kenny Scharf, Erik Parker, Katherine Bernhardt, assume vivid astro focus, Trudy Benson, Dzine and Natalie Frank whose paintings are rendered in an expressionistic language of graffiti, street art, and geometric abstraction. Venezuelan born, Harvard educated, and a New York resident for the last 17 years, Brito places a high value on the power of music, fashion, theater, design, and contemporary art to transmit a humanistic and cultural message.

Brito sees the New York’s art scene as one if its most valuable assets, fungible, porous, and exportable. “We have in New York a concentration of creative thinkers who are moving the wheel forward. The artists I work with have been deeply influenced by New York and the city is very palpable in their work in many ways,” she said.

“Even though we are going through some of the darkest times in the world, artists in New York keep pushing for freedom, integration, love, and an embracing of other cultures. The artists (showing in Mykonos) are from diverse backgrounds, American, French, Israeli, black, gay. This was not by design, it’s just the fabric of our city  is sewn together that way,” she added. By taking their works to Mykonos, Brito is reaching out to a different kind of cultural hub, buzzing with summer life and internationally focused.

Restaurant: Interni. “The food there is amazing”

Shopping: Luisa. “It has the most beautiful bathing suits, caftans, and sandals.”

Hotels: “Grace Hotel is gorgeous. The Belvedere Hotel is great for nightlife.” 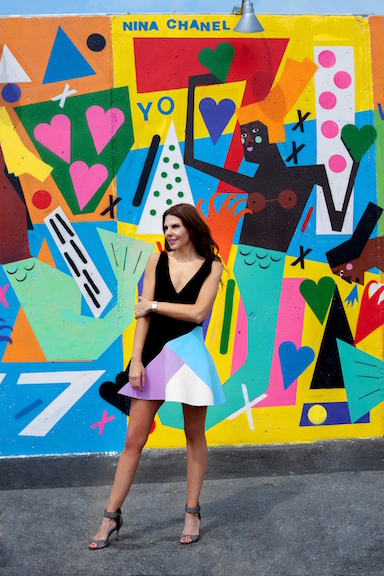