It’s an article of faith among journalists that The New York Times is stingy with credit. The paper of record seldom credits other media organizations for stories that appeared elsewhere first, and will go to absurd lengths – sometimes even obscuring the actual reality of a story — to preserve the illusion that the news didn’t exist until the Times happened upon it. This Gawker story, headlined “What Is to Be Done About the New York Times Not Giving Credit Where It’s Due?” goes into some detail about The Times’ cheapness with credit.

I’ve personally written stories and watched the Times publish later with facts similar to mine appear without mention. For example, on June 13, I wrote a story called “New Third-Party Group Emerges to Try to Thwart Trump” that was the first to report that the well-known Trump hater John Kingston had recruited Anne MacDonald (Laura Bush’s Chief of Staff after the Bush presidency) and Perot lawyer Matthew D. Sawyer to the cause, as well as using pollster Joel Searby.

The next day, the Times ran a story titled “Conservative Donor’s Group Presses Ballot Access for a Third-Party Candidate” that reported the inclusion of, you guessed it, Anne MacDonald, Matthew Sawyer and Joel Searby (and added Mohammad Jazil to the mix). No mention of my story found its way into the Times story. My colleague at the Observer, Jill Jorgensen, has a favorite no-credit example in which DNAInfo had reported something first only to see the Times mention that the story had originally appeared on a “news website.”

Most of this stuff is about ego, with a tiny bit of actual grievance when the pageviews that ought to arrive via a well-earned link in the well-read Times don’t materialize. None of this matters much to anyone outside the journalists who are as sensitive to slights as bomb-sniffing dogs are to shoe bombers.

Still, a particularly hilarious example of Times blindness arrived on doorsteps this morning. The Observer would like to help our colleagues in midtown identify a “journalist” from a competing paper who somehow failed to earn a mention in a long story about a topic everyone in America is discussing.

On Friday, Jonathan Capehart interviewed Attorney General Loretta Lynch, with the previously scheduled Aspen Institute panel coincidentally occurring just days after Lynch’s impromptu tarmac meeting with former President Bill Clinton. In a generally friendly interview befitting that kind of high-minded forum, Capehart did manage to summarize what just about everyone following the story was thinking when he asked her, smiling but pointedly, “What on earth were you thinking?”

The interview was covered by everyone, including Capehart’s employer, the Washington Post, for whom he writes editorials. Capehart is well known in these parts, a Newark guy who was the youngest-ever member of the Daily News‘ editorial board and shared a Pulitzer Prize before going to Bloomberg News, which he eventually left to write speeches for Mike Bloomberg during his first run for mayor in 2001.

And yet, somehow, the Times failed to identify the person who conducted the most highly sought-after interview of the week. In their lengthy story about Lynch’s scandal, the three Times writers who shared the byline, Mark Landler, Matt Apuzzo, and Amy Chozick, credited only an unnamed “journalist”: “Asked by a journalist to name one thing she wished her predecessor, Eric H. Holder Jr., had told her about her job, she replied, ‘Where the lock on the plane door was.'”

The photo that accompanied the story in print was even more ridiculous. It depicts Capehart interviewing Lynch and simply declines even to acknowledge another human being in the shot. The exact same photo, taken by Jordan Curet of the Aspen Daily News and syndicated by the Associated Press, appeared in plenty of other places, including the Aspen Daily News, which identified not only Capehart but uttered the name of his newspaper, which just happens to be competing with the Times rather aggressively.

Again, this kind of thing probably doesn’t matter much to anyone other than Capehart’s mom and dad. But people who do want to know who did what to whom ought to get at least as much info from the New York Times as they get from the Aspen Daily News. 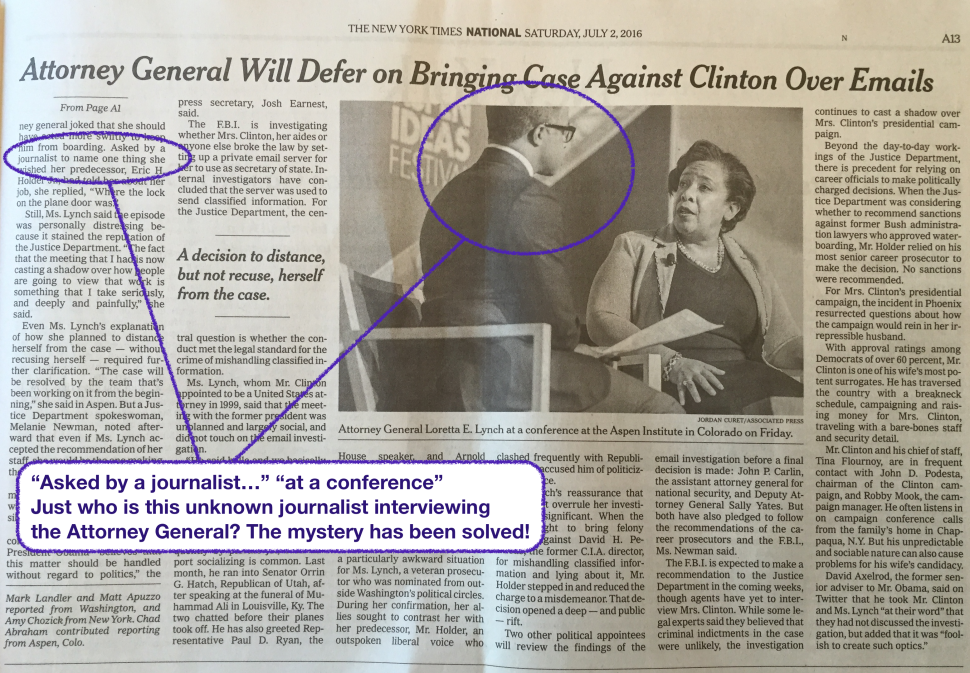