A New York City congressman tore into Republican nominee Donald Trump’s response to the September 11, 2001 terror attacks tonight, capping off several speakers who highlighted Hillary Clinton’s role in responding to the attack as the state’s senator.

“Where was Trump in the days and the months and the years after 9/11?” Congressman Joseph Crowley of Queens asked. “He didn’t stand on the pile. He didn’t lobby Congress for help. He didn’t fight for our first responders. Nope—he cashed in.”

Crowley, who spoke about a cousin in the fire department who was killed in the attacks, said that while Clinton had fought for legislation to secure funding for “local mom and pop shops,” Trump went after that money for his own businesses.

“It was one of our nation’s darkest days, but to Trump, it was just another chance to make a quick buck,” Crowley said, to boos from the crowd.

Crowley was the final of three speakers from New York tonight who highlighted Clinton’s response to 9/11, which came in the same year she was first sworn in as the state’s junior senator and shaped part of her legacy in New York, as she and the delegation fought for the federal response to include funding for New York City to recover from the attacks and for health care and other protections for first responders, something NYPD detective Joe Sweeney spoke about this evening.

“We had a job to do and we did our best at the time. The EPA assured us that the air at ground zero was safe to breathe. That information was dead wrong,” Sweeney said. “Thousands of my friends and brother and sisters in blue were exposed to harmful toxins that cause lifelong health problems. And when we needed someone to speak for us, to stand with us, to fight on our behalf, Hillary Clinton was there with us every step of the way.”

But perhaps the most emotional account of the day and Clinton’s response to it came in the story of her personal connection with Lauren Manning, a Cantor Fitzgerald employee who was burned so badly in the attacks she was not expected to survive.

“I fought in tribute to my friends and colleagues at Cantor Fitzgerald that I lost that day and all the 2,996 people who were killed. I fought to honor our troops who were fighting and continue to fight on the front lines for each and every one of us around the world,” she said. “And I fought to return to my young son, ten months old at the time. I fought as hard as I could so that the terrorists would not get one more.”

And Manning said Clinton was by her side in that fight, showing up at a moment when she needed someone to show up.

“She walked into my hospital room and she took my bandaged hand into her own. Our connection wasn’t between a senator and a constituent. It was person-to-person. And as a woman working in business for years, I know you had to be tough,” Manning said. “And in that woman is a hell of a tough person.” 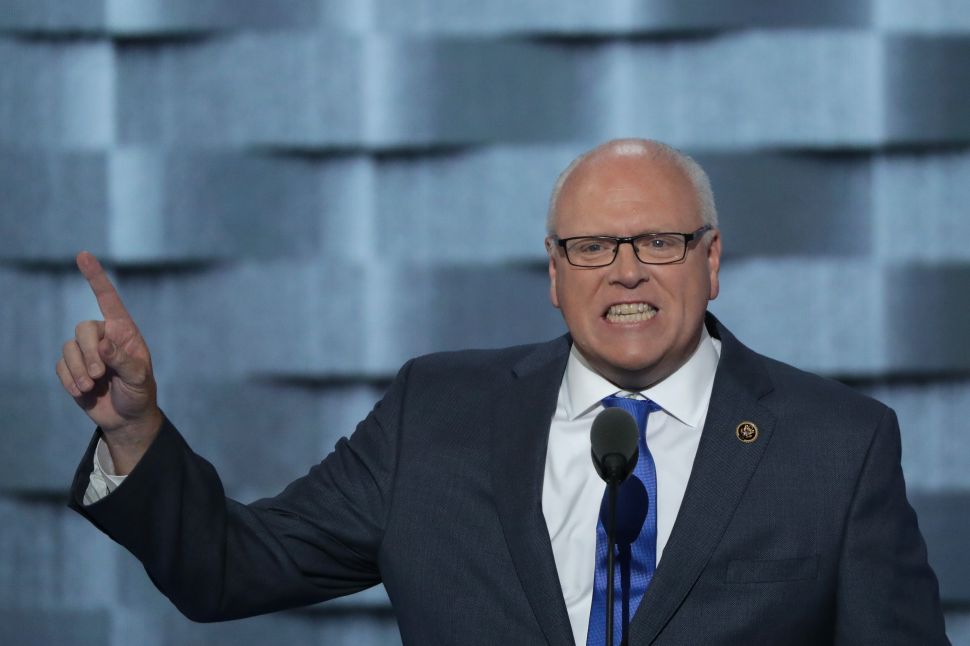