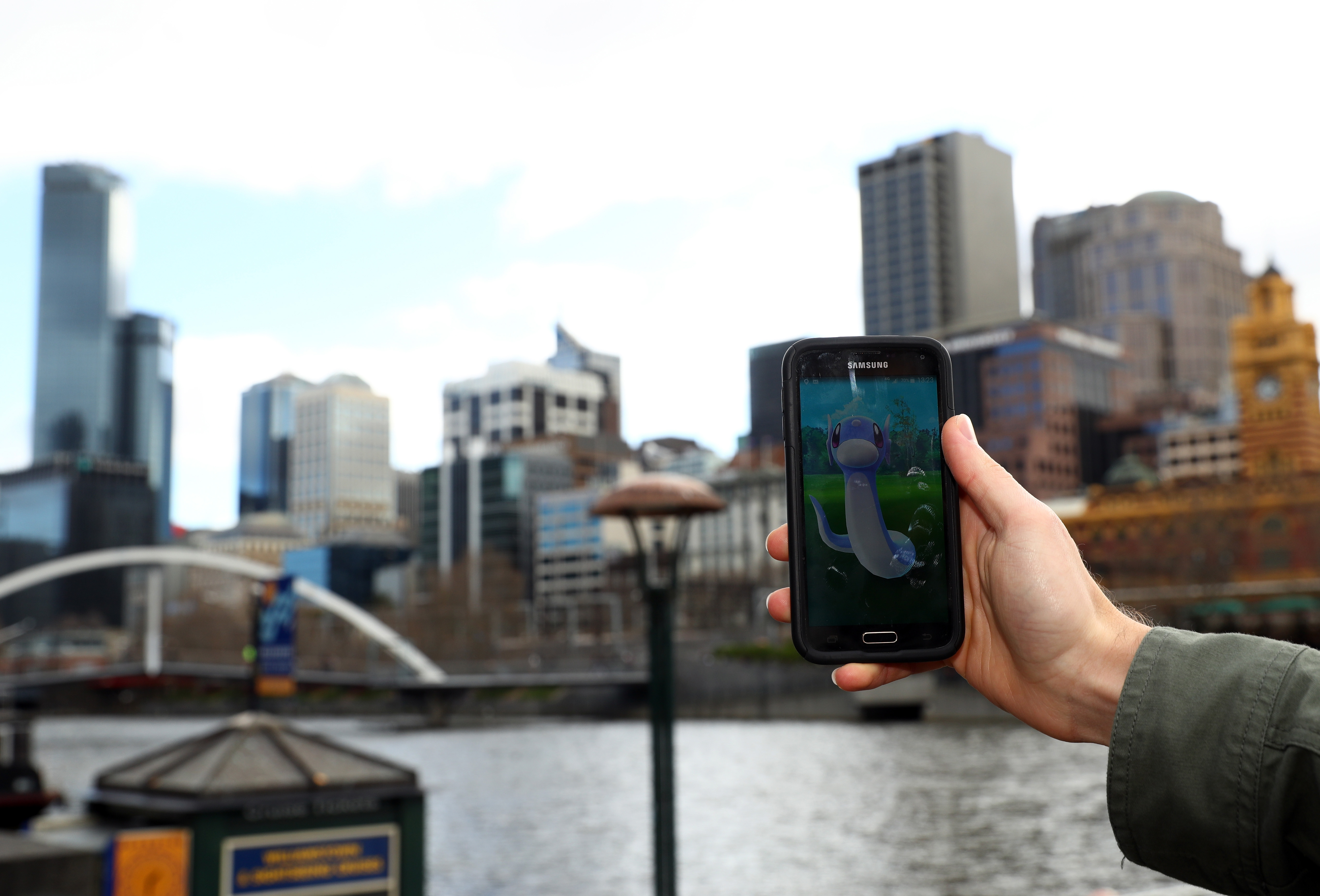 The hugely popular app has seen Nintendo shares soar following its limited release in the US, Australia and New Zealand on July 6. Robert Cianflone/Getty Images

Back in a February interview at 92Y, I said that I was very disappointed for Nintendo’s lack of effort to enter the mobile app world. With so many iconic characters and games, it made complete sense that they would want to play in the mobile space. I thought they were being romantic about console video games and that they could dominate the app market if they actually went for it.

In the last week, Nintendo went for it. Pokémon GO has been revolutionary by engaging users in real-life activities through AR (augmented reality) technology. They crushed it. Huge kudos to Nintendo.

I’m a big believer in nostalgic intellectual property. It is one of the most underrated value propositions in business and marketing. Nostalgic IP matters and it’s valuable and massively underpriced. While it’s not nostalgic for me personally, Pokémon just celebrated it’s 20th anniversary so you can easily see why it hits that 25 to 35-year-old demographic.

Pokémon GO plays off of nostalgia, which is a huge draw in app culture. It taps into emotions and storytelling that gives that brand a foot into the door of their consumers’ hearts. If I had created an app called “Creatures” with one hundred or so monsters to collect, it would only be 1/1000th as successful as Pokémon GO.

Nintendo’s success ladders back to my thesis in business (and in life) that you’re only as good as your last at bat. In my opinion, Nintendo didn’t do a good job over the last three to four years adjusting to the mobile environment. But, now they’ve just come out with one of the most significant apps in this space.

You can be doing everything wrong for quite a while and then you do something right and it changes your entire narrative. I love that. I love it in reverse too. I could make a slew of bad business decisions and come in last place. That’s the meritocracy of the game.

This is why you can’t get romantic about how you make your money. I thought Nintendo was being romantic about making proprietary consoles and games. I was convinced they put their heads in the sand about mobile technology while trying to figure out what their next step would be after the WiiU. I think too many of you out there act the same way when it comes to running your business. I implore you to really look at the actual marketplace and pay attention to what’s happening, even if it doesn’t seem to be in your best vested interest.

I think apps like Pokémon GO are examples of what we’ll be seeing more of in the future. Not only has it shown that there’s a willingness from consumers to use AR technology for gaming, but it’s affecting people’s’ behavior at scale. The app has made users physically leave their homes to seek out Pokémon in places they normally wouldn’t go (and eventually interact with other players outside of just the screen). This is very, very powerful.

If anything, tech like this proves that the mobile device has become the remote control to our lives. There are apps to control your television, your car, even the temperature of your home. It’s absolutely become the tool that everyone uses for utility and entertainment. One day we could be wearing smart contact lenses or be getting chips embedded into our brains. For now, these behaviors currently map back to the phone (and it might for the next decade), but who knows what will eventually replace it.

It’s impressive how successful Pokémon GO has been even though it’s only been out for less than a week. Its daily average usage is over 43 minutes—higher than Whatsapp, Instagram, Snapchat, and Messenger. I can see people of all ages playing it on the streets and I hear my employees talking about it non-stop. I’m excited to see where they’ll be taking such rich IP and I’m proud of Nintendo for making such big moves.

If you don’t know about Pokémon GO, check out a description below.

WHAT IS POKÉMON GO?

In the app, you create an avatar that is positioned according to your geolocation using your phone’s GPS. As you walk around in the real world, your avatar will too. You’ll see yourself on a map like you would on Google Maps. However, normal landmarks will be replaced by Pokéstops–locations that offer free items every 5 minutes as long as you’re in the vicinity. You’ll receive items to heal your Pokémon after a battle, Pokémon eggs that you can hatch by walking a certain distance, and most importantly, the Pokéballs you use to catch new Pokémon. You can encounter Pokémon almost anywhere, but they most prevalently show up in grassy areas like parks, which drives people into public spaces.

So what do you do with the Pokémon you collect? The more of one species that you get, the stronger that species will become. When you get to a certain level, you get to represent one of three teams: Red, Blue, and Yellow. These teams duke it out in a turf war trying to capture and hold Pokémon Gyms that are placed at bigger landmarks in the real world.

What’s interesting is that Pokémon GO has yet to feature any sort of in-app messaging or sharing features. However, it’s obvious that the app is successful in driving real-world interactions.

In the game, users can purchase Pokémon “lures” with real money. When activated at a Pokéstop, the landmark will show up with pink flower petals that signify to all trainers that more Pokémon will be lured to that area. Once it’s active, you can see the people flock that location. You’ve probably have already seen chalkboard signs outside of coffee shops advertising for users to stop in to catch whatever Pokémon may be available. I can see marketers finding ways to ruin this soon. 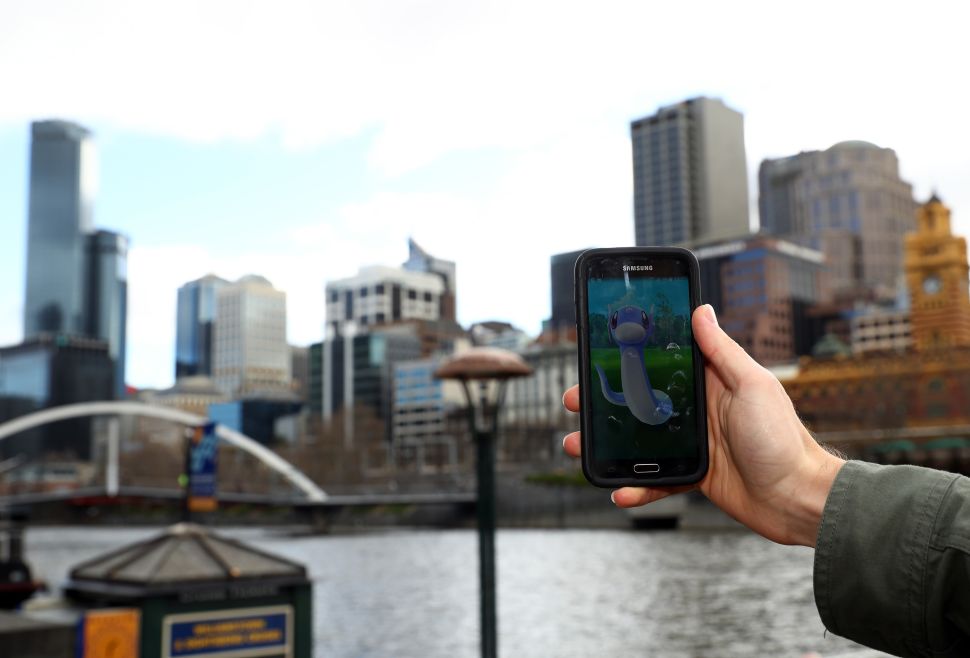