The Dallas police massacre has shocked major media outlets that managed to miss—or ignore—The War On Cops that began with the 2014 Ferguson, Missouri death of Michael Brown and accelerated with Baltimore’s riots following the death of Freddy Gray.

In the wake of the Dallas slaughter, community and civic leaders, especially the exceptional Dallas Chief of Police David Brown, provided first decisive then reassuring and unifying leadership.

Chief Brown gets credit for decisive leadership in crisis: He saw good men murdered in a sophisticated ambush. The sniper occupied a fortified position and promised to fight to the death. So Chief Brown gave the order to kill the sniper using a bomb delivered by an unmanned ground vehicle. No more good guys were at risk. The bomb limited collateral damage—Dallas wouldn’t repeat Philadelphia’s 1985 mistake when a police helicopter dropped a bomb on a bunkered position occupied by an armed black militants shooting at police. The bomb caused a fire and destroyed over 60 homes.

Leaders in Ferguson and Baltimore were confused, lacked decisiveness and feared their own people. They also feared the accusation of racism and fascism from radical activists. If anything, they magnified a highly questionable yet fashionable media narrative, that police in America kill young black American men at statistically heinous rates. (They don’t, but major media have been slow to recognize the fact.)

In Dallas, however, there is sadness, not riot. The language of Dallas’ civic leaders has been somber and reflective. A somber, reflective peace has settled on Dallas.

The opening minutes of the July 8 press conference conducted by Mayor Mike Rawlings and Chief Brown are illustrative.

Mayor Rawlings thanks Texas state leaders for their assistance and thanks President Barack Obama for his expression of concern. He reassures the people of Dallas that his administration’s number one job is to make certain their city is safe (a pertinent echo of New York mayor Rudy Giuliani’s reassurance during the far graver disaster of 9-11).

Rawlings praises Chief Brown. He clearly backs Chief Brown and his officers. Then the mayor wisely steps aside and Brown takes the mike—with eloquence: “We’re hurting,” he says. “Our profession is hurting… Dallas officers are hurting… We are heartbroken. There are no words to describe the atrocity that occurred to our city. All I know is this, this must stop, this divisiveness.”

Stop this divisiveness. The statement is a victory for sanity and honesty. Brown understands the price of violent divisiveness. He lost a police patrol partner in a gun battle. Drug dealers murdered his brother. His troubled son died in a firefight with police, after his son killed two people, one of them a policeman.

Scott believes that “understanding how our neighbors see the world” is an essential American obligation.

But who has benefited from the division?

No sane person ever said black lives didn’t matter or that racial prejudice doesn’t exist in America—quite the opposite. But two or three short weeks ago try and whisper “all lives matter” much less “blue lives matter” (ie, the lives of law enforcement officers) and Black Lives Matter activists, their political allies and their friendly media pals would have scorned your words as gutter racism.

Exploiting a violent incident to spur divisiveness has also served the political goals of the Democratic Party. Recall the January 2011 shooting of U.S. Representative Gabby Giffords, which biased major media managed to blame on Sarah Palin—especially in the immediate, emotionally explosive aftermath.

It is a fact that Governor Palin’s Facebook page included a map with rifle scope cross hairs marking Democratic Party-controlled House districts that Republicans wished to defeat in the next election.

But suddenly this rather common icon tied Palin to an atrocity ripe for exploitation by leftist operatives with bylines. Instead of somber rhetorical reflection, they spewed hate.

Mike Daly in The New York Daily News, waging over-the-top War on Honesty, wrote: “But anyone with any sense at all knows that violent language can incite actual violence, that metaphor can incite murder.”

Paul Krugman of The New York Times just had to add his usual polemical nonsense.

Krugman hedged his accusation of murder, but barely: “We don’t have proof yet that this was political, but the odds are that it was.” Krugman rambled through dark references to Palin, the Tea Party, Republicans—you know, the monsters that live under Krugman’s bed.

To her credit, Palin fired back and claimed libel.

As for President Barack Obama? He weighed in a bit late. He called for civility. He called for free discussion beyond partisanship—then, lo and behold, he mentioned gun control.

Yes, he used the opportunity to flack one of his favored and highly-partisan political programs. His propaganda hides between the lines, but it’s there—oppose gun control and somehow you share responsibility for future Tucson-like atrocities.

The Tucson shooter, Jared Lee Loughner, turned out to be a nut with hard left sympathies—much like Dallas sniper Micah X. Johnson.

A brief sampler of Obama’s use of violent metaphors in political speech:

“If they bring a knife to the fight, we bring a gun,” Obama said at a Philadelphia fundraiser in June 2008. “Because, from what I understand, folks in Philly like a good brawl. I’ve seen Eagles fans.”

Yes, it is all constitutionally protected.

Should we be surprised? Harsh rhetoric to enthuse supporters and thrill media and sharp, partisan divisiveness are the tactical tools of “community organizing” as practiced by the American Left. Obama began his career as a “community organizer.”

Giuliani also said Black Lives Matter had a tendency to focus on killings of blacks from police officers, rather than paying attention to cases where blacks killed each other.

A harsh statement? Yes, definitely. But an intellectually and factually invalid position? Only in the world where major media Wage War on Honesty.

Giuliani exposes the double game played by Black Lives Matter and their media allies. The very name is a tool of division. Fact is, the name amounts to race-baiting. No one sane and responsible ever said black lives don’t matter. In an action reminiscent of 1930s-era Fascist thugs, on August 9, 2015 Black Lives Matter activists shouted down Senator Bernie Sanders then mobbed the stage at a rally in Seattle.

Activists with Black Lives Matter halted a political rally in Seattle where Democratic presidential candidate Sanders was scheduled to speak on Saturday afternoon.

“We’re shutting this event down—now,” said an activist who suddenly leapt on stage. She approached the microphone where Sanders had just begun speaking, thanking attendees for welcoming him to “one of most progressive cities in the United States of America.” An event organizer attempted to stop the activist, and a heated exchange ensued as the crowd booed.

Eventually, activist Marissa Johnson was allowed to speak. “I was going to tell Bernie how racist this city is, even with all of these progressives, but you’ve already done that for me. Thank you,” she said, as some in the crowd called for her arrest.

Johnson then asked for a four-and-half-minute moment of silence to honor Michael Brown Jr., the black teenager who was killed by police in Ferguson, Missouri, a year ago. As the crowd grew more agitated, Johnson added that Sanders says he cares about grassroots movements, but, “The biggest grassroots movement in this country right now is Black Lives Matter.”

Agitation. Shouts. Mob action to seize the stage and microphone. Then the appeal to the memory of the martyred Michael Brown, murdered by police.

Except he wasn’t murdered. He was killed, while fighting with a police officer.

A grand jury refused to indict the police officer who shot him, Officer Darren Wilson. Michael Brown had committed a crime and, rather than accept arrest, decided to fight.

The Volokh Conspiracy post dissects the various accusations that failure to indict demonstrated the legal system is flawed. The worst of these accusations goes something like this: the system is inherently racist. There is no justice for black men in America. Who benefits from this vicious accusation? Activist organizations like Black Lives Matter—which used Michael Brown to spur hate right there in Seattle. Oh, yes—leftist academics who build careers on embedded grievance studies, they also benefit.

“The Ferguson Effect” is factual.

“…crime increased in cities after violent protests against police occurred.”

The War On Cops “serves ideological, not policing, goals.”

As quoted in National Review, author and expert on policing Heather Mac Donald was the first to identify the Ferguson Effect, “which she traces to anti-police rhetoric and then the resulting wariness of police to enforce the law and arrest lawbreakers. Academics who initially challenged the reasons for this wave of violence have now largely retracted that challenge. This is part of a larger movement of what she calls ‘the DE legitimation of law and order.'”

Yes, a victory for truth. Divisiveness that undermines law and order hardens a radical activist’s grip on the community he seeks to organize—and politically control.

Dallas seems to have made an impression on Obama.

Though he refuses to speculate on Michael X. Johnson’s motives for murdering police en masse, he has so far refrained from exploiting the tragedy.

In 2008 Barack Obama was touted as a racial healer. He would do more for the old racist U.S. than any prior president, with the possible exception of Abraham Lincoln.

But Obama’s healing would extend beyond race. He—his personhood—was a force. Obama was the promised Great Uniter.

In 2016—after the Dallas police massacre—it’s reasonable to ask if Obama has healed or harmed race relations and if, in retrospect, he is a Uniter or a Divider?

The Great Healer/Uniter message certainly looks like a propagandist’s War on Honesty. The Self-Serving Community Organizer And Occasional Divider Who Didn’t Unite America is a moniker Obama’s adoring press corps will resist and leftish academics will excoriate. However, the bleeding streets of Summer 2016, The War On Cops and a rising violent crime rate at least sketch a case that he has earned the name. 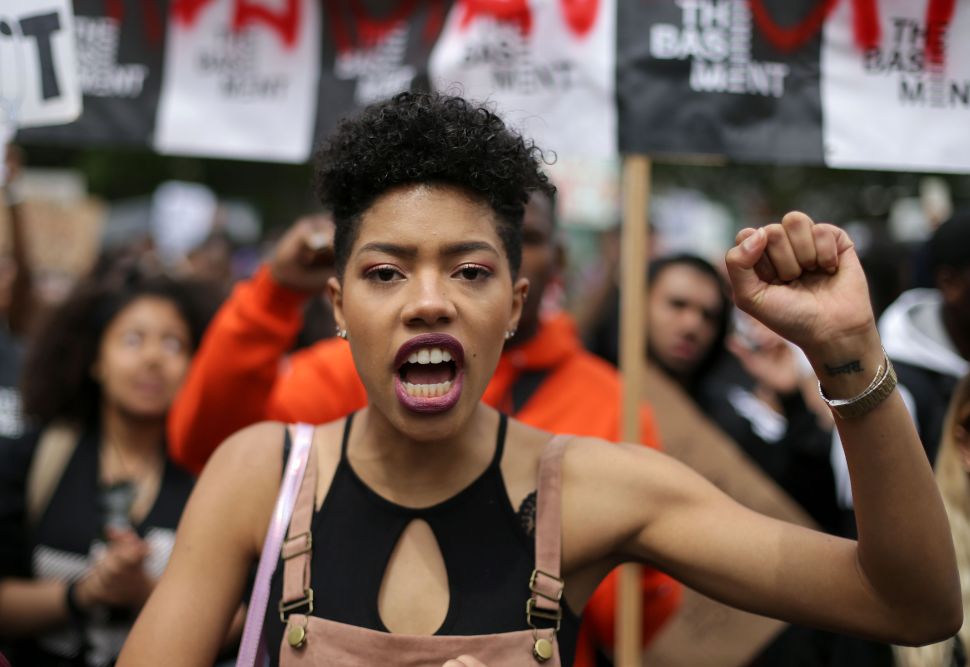