PHILADELPHIA—Eight years after he defeated her for the same nomination, President Barack Obama said he was ready to pass Hillary Clinton the baton—making a passionate appeal for voters to elect her to the White House and to reject Republican Donald Trump.

“Time and again, you’ve picked me up. I hope, sometimes, I picked you up, too,” Obama said. “Tonight, I ask you to do for Hillary Clinton what you did for me. I ask you to carry her the same way you carried me.”

Obama, who was joined by Clinton after he finished his speech, was tasked in his final convention address as president not just with endorsing Clinton—but with defending his own presidency and protecting his legacy, in part by helping Clinton beat back a candidate who has questioned the president’s birth certificate and has painted a dire picture of a lost country at the end of his term.

“America has changed over the years. But these values my grandparents taught me,” Obama said, referring to the 2004 keynote convention speech he gave about his family, “they haven’t gone anywhere. They’re as strong as ever; still cherished by people of every party, every race, and every faith. They live on in each of us. What makes us American, what makes us patriots, is what’s in here.”

He continued with a pointed jab at Trump, without using his name.

“That’s why anyone who threatens our values, whether fascists or communists or jihadists or homegrown demagogues, will always fail in the end,” he said.

Obama outlined Clinton’s accomplishments, and his experience alongside her from their 2008 campaign rivalry—noting she did everything he did, but, like Ginger Roberts, backwards and in heels—to her time as his Secretary of State.

He also made a direct appeal to those skeptical of her, saying she’s been “caricatured” on the right and the left, but comparing her to Theodore Roosevelt’s famous ode to the man “who is actually in the arena.”

“Hillary Clinton is that woman in the arena. She’s been there for us—even if we haven’t always noticed. If you’re serious about our democracy, you can’t afford to stay home just because she might not align with you on every issue. You’ve got to get in the arena with her, because democracy isn’t a spectator sport. America isn’t about ‘yes he will.’ It’s about ‘yes we can,'” he said. “And we’re going to carry Hillary to victory this fall, because that’s what the moment demands.”

Of course, Obama devoted some time to Trump too, letting disbelief creep into his voice and his smile as he wondered at his presidency of someone he described as “not really a plans guy, not really a facts guy either.”

“Does anyone really believe that a guy who’s spent his 70 years on this Earth showing no regard for working people is suddenly going to be your champion? Your voice? If so, you should vote for him,” Obama said. “But if you’re someone who’s truly concerned about paying your bills, if you’re really concerned about pocketbook issue and seeing the economy grow, and creating more opportunity for everybody, then the choice isn’t even close. If you want someone with a lifelong track record of fighting for higher wages, and better benefits, and a fairer tax code, and a bigger voice for workers, and stronger regulations on Wall Street, then you should vote for Hillary Clinton.”

But his message was probably best summed up when he first said Trump’s name and was met with a chorus of boos. 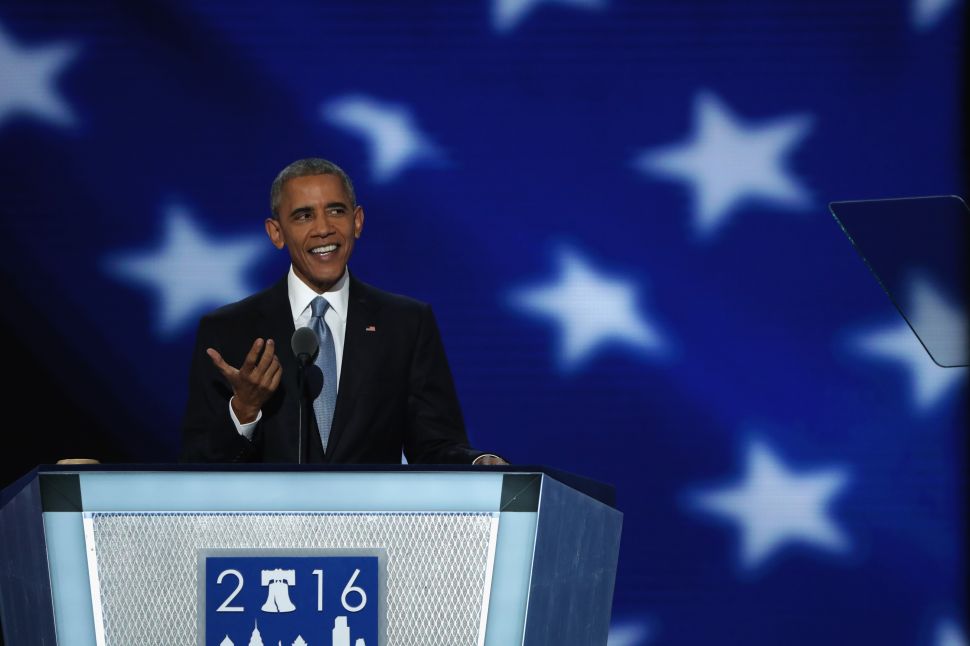