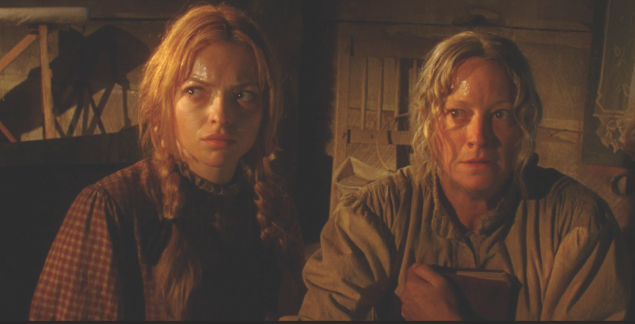 No need to get worked up about Outlaws and Angels, a vile, nauseating and incomprehensible pile of saddles-and-spurs gibberish sane audiences will undoubtedly avoid at all costs. It defies description, which might lead some misguided souls to praise it falsely, but let’s just call it a demented psychological western inspired by the worst kind of Actors Studio method mumbling ever seen on the screen mislabeled as acting.

The noise you hear is not the sound of people stomping toward the exit doors. It’s Stanislavski, Lee Strasberg and Marlon Brando turning over in their graves.

The writer and director is J.T. Mollner, a name to erase from memory immediately. He conjures a sick tale about a gang of masked bank robbers in 1887 New Mexico who blast bullets through the eye of an innocent lady bystander in the escape. With a fat bounty on their heads, they head for the hills with Luke Wilson leading a tiny posse in lukewarm pursuit. Before they can pause to pee, they kill two more people, including Clint Eastwood’s ex-partner, the excellent actress Frances Fisher. They soon come upon a family of pioneers at their dinner table, break the father’s nose, punch the Bible-fearing mother in the face and draw straws to see who gets to rape the two daughters. Alas, the father with blood spurting from his nose got there first. He’s been raping them all for years, encouraged by the mother, who, for a God-fearing woman, takes to the sex with great relish that is anything but convincing.

Flo, the youngest daughter, is played by Francesca Eastwood, the actual daughter of Clint Eastwood and Frances Fisher, which perhaps explains why Fisher does everybody the favor of a walk-on. (No word about whether Eastwood had a hand in the directing.) Their daughter can’t act, but she goes wild trying. For reasons known only to Sigmund Freud, she strips down Henry, the scruffy, bearded leader of the pack (an actor named Chad Michael Murray, who sounds like he’s choking on corn mush stuck in his windpipe) and gives him a massage on a painful rope mattress with more than her hands, because that’s what she’s been doing to Dad. One unzip of the breeches, and Henry is besotted with Flo—until he finds out what she’s good at. So he instructs his gang to sodomize the father with much screaming and hollering. Before they say adios for good, the father confesses he also impregnated the oldest daughter and prevented her from ever having another baby. Flo wants to finish him off by blowing a hole through her own papa the size of a beer barrel but settles for a long, slow series of savage blows until his skull turns to meat tartar, replete with slow-motion blood splattering all over the room while the soundtrack plays a piano concerto. There’s more, but all you need to know is that in the end, the entire cast litters the cactus like road kill except for Fisher, who has miraculously survived the slaughter, massacring her sister and Henry, too. But she’s not finished yet. She finds a hatchet, see, and…

This would be bad enough if you could understand what they’re saying, but at least 50 percent of the dialogue is as unintelligible as hens in a chicken coop—the rest is not worth hearing anyway. All of it is drowned out by inappropriate classical music heavy as sorghum and country and western whistling. The style is crude, the acting is uniformly marble-hearted (except for Frances Fisher, who seems to be in another film entirely), and the sets look like they’ve been used in an avant-garde community theater production of Oklahoma! Outlaws and Angels is an exercise in parched, bled-out, cosmic cynicism dreamed up by the Marquis de Sade in spurs—the first of its kind in my book, and if there’s a God, definitely the last. 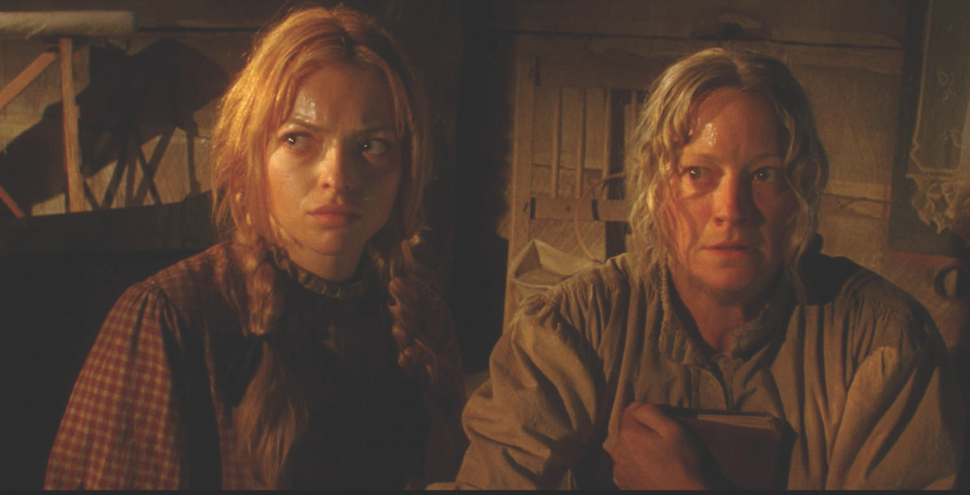