Philipp Plein arrived at Indochine just after 10 PM last night. His girlfriend, Romanian model Andreea Sasu, clung to one arm, while legendary photographer Steven Klein followed close behind. The rest of the 30 dinner guests had been seated at the legendary NoHo eatery since 8:30 PM. “He always shows up at least an hour late, it’s like his thing,” one dinner guest said as she sipped a cocktail across from me.

The cause for the dinner was simply Mr. Plein’s stateside presence. The designer, whose home base is in Lugano, Switzerland, made his U.S. landfall over the weekend in East Hampton where he hosted a dinner at C/O The Maidstone alongside his longtime customer and supporter Julie Macklowe. Among other extravagances, the party came complete with a 10-foot-tall cake imagined by Sylvia Weinstock. “I was first in the Hamptons when I was 19,” Mr. Plein recalled. “I met a girl when I was out at Jet East, and we ended up dating for more than 2 years. She was 10 years older than me – a beautiful Jewish woman who was working for Miramax Films.”

His evening at Indochine lasted well past midnight, and include not one, but two impromptu toasts offered up with double-tequila shots. It seemed that the man loved to party for just about any reason, but to him, it’s just apart of the business. “I’m not such a social person to be honest,” he confided after finishing his dessert. “I’m not a fan of going to big events. For me it’s always a bit difficult to meet new people, but my job makes me do it. There are few people I really like, and really feel connected to. I have to say that friendship is a big word. It’s like love. It’s not something you just throw around. A lot of people use the word ‘friend’ for everything if they’ve just met someone once. They say, ‘That’s my friend,’ but I have a little bit more respect for this word.”

While his over-the-top fashion shows have included performances by Theophilus London atop a jet ski, and Rita Ora emerging from a flaming car, he prefers intimate dinners like these with selected guests that he considers friends and supporters. In addition to Mr. Klein, he surrounds himself with a select group of eccentric folk who frequent his holiday homes in both Cannes and Beverly Hills. The most recent addition to this clique is the flashy yet mysterious street artist Alec Monopoly. “He is like adopted now, he’s apart of the family,” Mr. Plein said of Mr. Monopoly, whose graffiti often graces Birkin Bags and six-figure Ferraris. The two met via Instagram after Mr. Plein posted a photo of an Alec Monopoly work on Melrose. “My PR was unsuccessful in contacting him, so on my next visit to L.A. we ended up at the same table, I think it was at Beacher’s Mad House, and then we moved over to 1Oak, and then a suite at The Beverly Hills Hotel in the Jacuzzi with a bunch of girls. It was very Alec Monopoly style – and Plein style.” 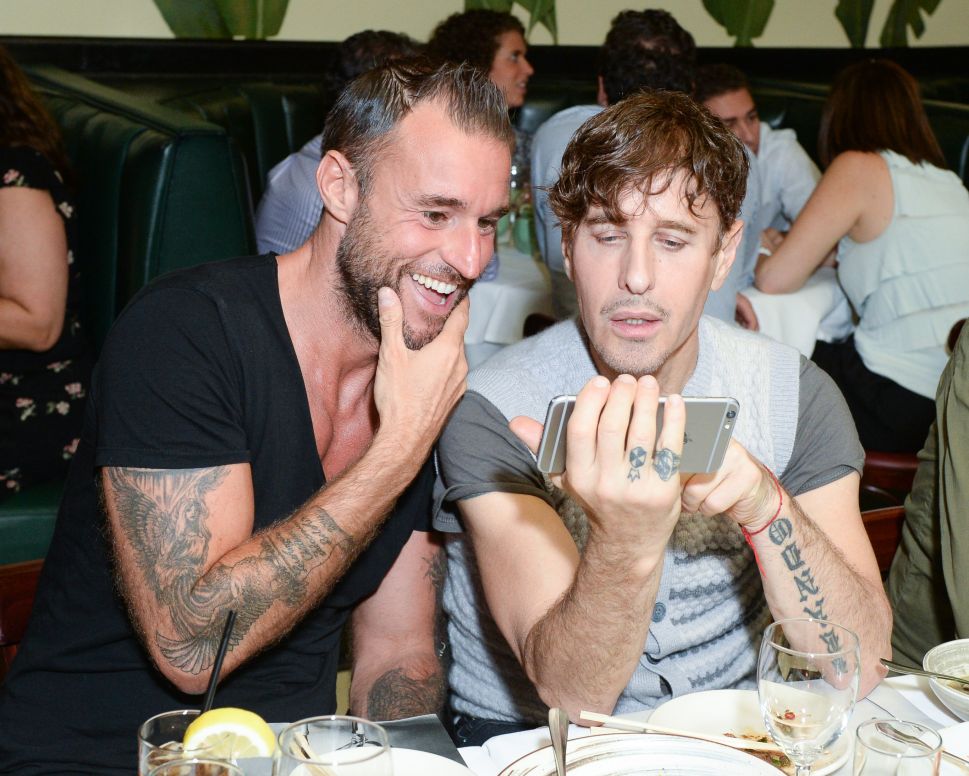