From lunch with David Hasselhoff to shopping with Eva Mendes, photographer Michael Lewis takes us behind the scenes and speaks about the unique self-portraits he creates with his celebrity subjects.

Observer: When did you start taking self-portraits with your subject on set? Who was your first on set self-portrait with?

Michael Lewis: First off, I never thought of these as “self-portraits.” And when I started doing them, I didn’t plan on them becoming their own series. I thought of them as visual autographs. The first time I jumped into the frame was when I was photographing David Hasselhoff. It was my assistant that said “Jump in…I’ll take one with you.” The stylist had brought a Knight Rider lunchbox and it did seem silly to not get a picture of myself in this scene. It was the late 90’s and at that time I was fairly new to shooting celebrities.

Observer: What is your funniest, or most memorable story from one of your on set shots?

ML: Arnold Schwarzenegger was quite memorable. He gave money to an East Los Angeles children’s center. This is where Arnold wanted the shoot to happen. They had a gym there, with a huge (kind of non-intentionally campy) mural painted of him which was about 20’ tall. The real Arnold looked dwarfed by his own mural. This was our last set-up, time was limited, and I didn’t think I’d have a chance to jump in. As soon as I knew I had the shot, I unannounced walked into the frame and mounted an exercise bike in the background. Arnold said, “Michael, I have to go. What are you doing?”

Observer: Have any of your celebrity subjects ever had any ideas as to how you should be posed, or what the set-up should be? Have any celebs ever asked you specifically for one of your on-set photos during a shoot?

ML: Eva Mendes: There were a ton of pictures that needed to be made in a rather short time. There wasn’t a second to waste; so I thought I wouldn’t get a chance to jump in with her. Turns out she had looked at my website before the shoot and knew about my side project. It was she that halted the shoot for a moment to let me jump in. It was the first time that the subject wanted me in the frame without me asking.

Observer: Self-portraits are a big theme in your work, both in this series and your more personal work off-set. Why are you so drawn to this style, and what do they mean to you artistically as a photographer?

ML: When I first started photographing people in art school, The characters looked highly romantic and pensive; and I always thought the subjects looked flattering, although they were caught in moments of distress or troubled self-reflection.  My ways of directing and my style of lighting didn’t account for what the commercial industry calls “beauty-lighting.” My lighting was very cinematic.  When I began working for editorial clients, the person I was hired to photograph had to look “attractive.” I certainly wasn’t supposed to look for what might be perceived as someone’s bad side. Suddenly the scene was less important than the attractiveness of the subject.

I continued to make my artwork as my editorial career began to flourish. I wanted to take a different approach to creating scenes with my friends as the characters. One of the early attempts was photographing a friend of mine, but this time the scene had a dead-air quality, as if NOTHING was going on. I had him in a shirt that was slightly snug and pants with pleats being pulled a bit tight; while standing in a corner holding a large filled Slurpee cup with an empty expression. He looked at the first polaroid test and said “Dude, I look like hell.”

“Great!” I thought. “An awkward and uncomfortable guy standing without the potential of anything to disrupt the deadening silence…perfect.” I think this sudden need to change my aesthetic was an attempt to balance my art-sensibilities with some of the commercial expectations of my new clients. I realized that what I was doing with my friend wasn’t flattering and, in all fairness, I should photograph myself in this way…just to see how it felt. When photographing myself, I didn’t have to look “good”…I could literally (and metaphorically) let it all hang out. I made no attempts to hide my belly or to look in a way that I thought would shine positively. Instead, I wanted to photograph myself in the real way I was when at home alone, unaware of my wardrobe, with no one there to assess me. I think it’s important for portrait photographers to do self-portraits. It creates an empathy for the people I photograph. I feel an obligation to my subjects to remain in touch with how it feels to be in front of the camera.

Observer: Do you have an artistic escape from portraiture? Would you say your work of “things” is one of those escapes?

ML: That, as well as aa new series called “Tales.” These images originally started off as a series of still lifes photographed in domestic settings, showing situations which address the repercussions and catastrophes of a common life. Slowly the ideas drifted into the outside world. The themes are less literal and more fantastical. The work evolved and eventually split into two separate bodies of work.This new project drifts away from images anchored by reality. They are constructed open-ended narratives which rely on symbolism and metaphor; as well as mystery. With intention, often nothing is revealed. 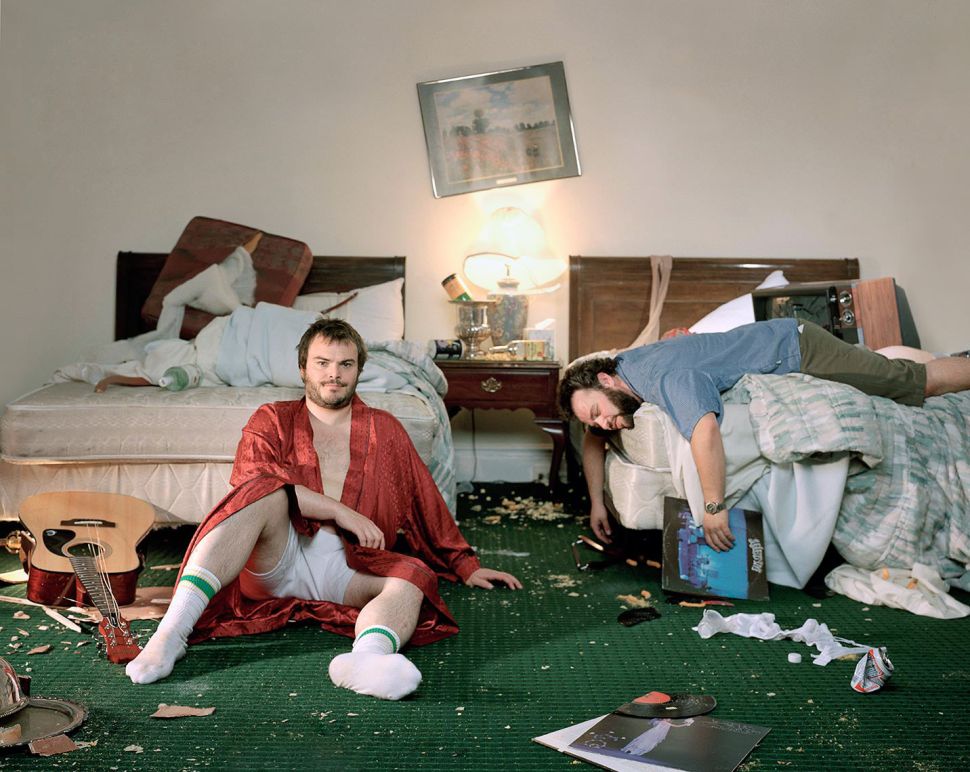