When I reached Union Square at midnight on Friday, I’d been playing Pokémon Go for just shy of six hours. Young people tend to cover the park’s grounds facing 14th street, entertaining each other in a variety of ways, but last weekend Nintendo’s new franchisee dominated their distraction. I came within earshot of a couple playing together and heard the woman say, “Oh, there’s the snake.”

I thought she meant she’d seen an Ekans, the Pokémon snake, but a few minutes later I passed a guy showing off his albino python. It had been a real snake. At that point, bringing an albino python out so girls will stroke your pet reptile felt less authentic than gathering to look for digital critters.

That hunt held the attention of six players I sat down next to on some of the square’s steps. They were showing each other their phones, talking about the game and laughing together. Then a couple in the group stood up to leave. The guy high-fived one girl that remained and said, “Goodbye Team Mystic. Goodbye, everybody else.” The couple hadn’t come out with the other four, and once I got a look at them I could see that they were probably almost ten years older than the rest. For a little bit, the game had made them a loose group.

I walked seven miles of Manhattan streets that night, beginning in the Financial District and wrapping up at Columbus Circle, at 2:30 a.m. For players, Pokémon Go has made some of the strangers in public places a little less strange. Serious players disable the augmented reality that has caused so much talk, in order to preserve battery life. Yet the game changes the real world without it; Pokémon Go adds an acknowledgement layer to public spaces, because people playing become just a little more likely to speak to others.

Long before the square, I had met up with Ivy St. Ive, the Craigslist Pokémon-trainer-for-hire, and her co-trainer Evander Batson at Zuccotti Park a little after 7PM. I’d just hit level 5, which lets you start to pit your creatures against others in gyms. We sat down in the park and began discussing their experience with other players around the city, and Batson said, “In Bushwick, we generally don’t talk to our neighbors,” but the game has given its locals and its new arrivals something in common. “It’s cool to see the neighborhood coming together.”

I had seen that effect already. As I caught my first zubat on a sidewalk along City Hall Park, two very pretty, very young girls named Emily and Lucia surprised me by asking, “Did you catch a Pokémon?” one asked, and the other rejoined, “We can’t find it!” These were not girls that would ever just talk to a dude like me on the street. I showed them how to work a Pokestop, which is all I knew at that point, and we went our separate ways.

‘When I first started playing, I was playing by myself. Five minutes later I’m in a squadron of five dudes’

St. Ive is an effusive evangelist for the mobile app’s ephemeral community. “I’ve given hugs to random guys on the street after taking over a gym,” she said. An avid player of Pokémon games since being a little girl playing the red game, she can remember going outside with her brother and pretending to be Pokémon trainers together, imagining finding clefairies and oddishes in their own backyards. “This game is making those 7-year-old dreams come true,” she said. She has been closely following the online conversation among players forced to discuss what they have figured out by Niantic, which dropped the game without much explanation of the finer points of how to play. Pokémon Go was built on the elbow grease of Niantic’s prior release, Ingress. The two games share some basic overall mechanics, in particular using significant places in the real world as anchors in each game’s digital one.

One of those significant spots is St. John’s Chapel, on Broadway. I found a gym there shortly after leaving the pros, but I couldn’t beat it with my nascent menagerie. As I began to leave, I noticed a very professional looking guy standing by the church’s fence, looking at his phone in what seemed to be the Pokémon pose. Inside my copy of the app, the gym had turned from blue to grey, which meant someone had beaten it.

So I doubled back and asked him if he’d been the one to unseat Team Mystic. He said he had. I think I might have helped him, so perhaps my efforts were not in vain. He was Alexei Lebedev, a software architect out checking out the game from professional interest. He’d also played Ingress for about six months, but he said never encountered another Ingress player.

We could see people that looked as if they were playing from where we were standing. “It makes you a little peaky,” Lebedev admitted.

People who have never played it might not understand why people gather now in front of places where no one lingered before. If you play and you know there’s a gym there, you understand that “there’s a good chance they are interacting with the gym, which is fascinating,” Lebedev said.

After I made it to Houston, I met two advanced members of Team Valor, Erwin Lee, level 20, and Wilson Ng, level 17, as they were taking over a gym at Crosby Street. They said they had met someone who had caught nearly every creature in the Pokedex. He said he’d done it by wandering nearly the whole city.

“It causes you to meet people,” Ng said, but he doubted anyone would expand their social circle this way. Still, at their advice, I made sure to hit Union Square on my way north. Without them, I might not have seen the python.

Lee and Ng had said Union Square had been like a party when they passed through, with people teaming up to drop lures and calling out catchable Pokémon, but the square had more the feeling of an SAT exam by the time I arrived, so I kept going north.

I got to Bryant Park at 1:40 AM, after it had been closed off to the public. About a dozen or so people sat on the steps at the edge, trying to take on the gym at the park’s east end. I introduced myself to Julio Reyes III, who was only half-playing, reclining on his backpack and holding forth to other players (who only half-listened) about how suddenly everyone loved these characters again even though he’d been picked on because his love for Pokémon never paused since the first game in 1996.

He had also dreamed of becoming a real Pokémon trainer, which made this new iteration’s real world integration special. He told me, “When I first started playing, I was playing by myself. Five minutes later I’m in a squadron of five dudes.” His most remarkable encounters so far? Light conversations with girls playing the game. “Some were receptive. Some weren’t,” he confessed.

That’s when Scott Standish-Parkin joined in. He was wearing camo shorts and a T-shirt covered in caricatures of comic book characters. He introduced himself as one of the first 400 players of Ingress and a Pokémon beta tester.

Ingress, he said, had led him to road trips, to parties on yachts and a huge New York community that could take over bars. When Google owned Niantic, it would pull together what he called “anomalies,” where thousands of people would show up at the same place and the same time to move the story of the two sides forward.

Niantic doesn’t seem to need to do that with Pokémon Go, though. Anomalies happen on their own with nostalgia amplified by the mobile web.

I hadn’t brought enough battery packs with me to keep going much longer after that. I made it to the southern edge of Central Park and decided to call it a night. I would have had one last fight, but the gym just east of Columbus Circle happened to belong to my team, Team Instinct, when I got there.

On the train platform, out of the reach of GPS, I started talking to two guys who were doing some maintenance work on their characters as they waited for the A train to go home. They’d been playing together that night, which seemed like the game’s main social feature: it’s a new way for groups or couples to experience the city together. There’s still no good mobile app for making friends, but this one gives you something to do in person with the ones you’ve got.

Honestly, for the people who play this game, much of Manhattan’s night life can engender the same outcast feelings as high school. Niantic has made public space their scene, and it’s free.

My interview with those last two fellows, Sandy and Louis, didn’t make it that far. A guy on the bench behind them interrupted to ask how the game worked, and so they started explaining it to him. The conversation might have put another dude on Team Mystic, but I’d be surprised if those guys ever saw each other again.

And that’s all right. In this incredibly diverse city, we get along by minding our own business, but in the Pokémon Go acknowledgement layer, everyone has a very light push to transgress boundaries of race and class. What IRL encounters Pokémon trainers have will be fleeting, of course, but not everyone needs everybody else in their Rolodex. Still, it doesn’t hurt—in these divided times—if a side effect of the latest tech phenomenon proves to be a surprising new urban behavior: saying hello. 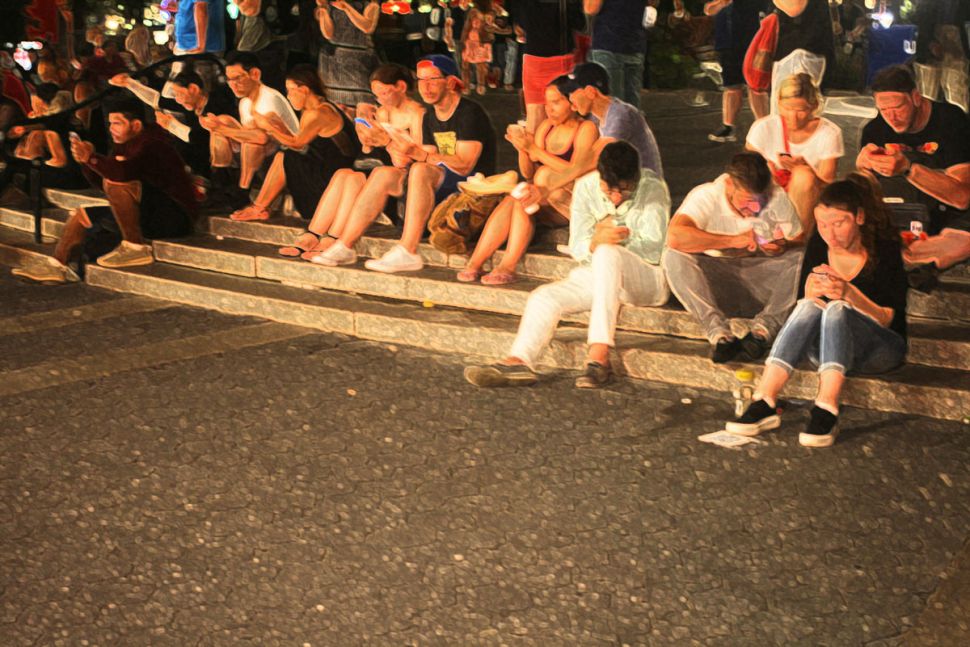