It’s Monday, and with the Republican National Convention behind us, it’s time to look ahead to the Democrats meeting in Philadelphia, and a new – sort of old – proposal to fund the Transportation Trust Fund. But before we jump into the next seven days of speeches and convention-floor shenanigans, let’s take a look back at last week’s political winners and losers.

In Philadelphia DNC, Some See a Turning Point for Norcross
With the Democratic National Convention in Philadelphia happening next week, many are predicting a staid event where presumptive nominee Hillary Clinton’s choice of running mate will grab the most attention. For New Jersey, however, the convention will mark the chance for one of its most powerful unelected officials to make further overtures to the city across the river and to national Democrats.
JT Aregood, PolitickerNJ Read more

Post-Convention, NJ Trump Supporters and Critics Weigh in
With the Republican National Convention in Cleveland over and Donald Trump officially his party’s choice for the presidential nomination, state lawmakers and party leaders are adjusting to the reality of a nominee who many wrote off when he announced his campaign a year ago. Trump’s supporters in the state are calling his victory lap in Cleveland a sign that Republican voters want to see meaningful change to their party.
JT Aregood, PolitickerNJ Read more

Tim Kaine and the Atlantic Coast Conference Strategy
Throughout the 2016 presidential campaign, I consistently made wrong predictions about the Republican campaign. With regard to the Democrats, however, I was right on the money with my prediction of a Clinton-Kaine ticket.
Alan Steinberg, PolitickerNJ Read more

Please Fix This, Steve Sweeney
Scott Garrett is long-serving NJ Congressman with perhaps the worst anti-LGBT voting record in Congress. Not once in his 16 year career, did Congressman Garrett miss an opportunity to deprive LGBT people of their liberties. On issues like marriage and adoption, anti-bullying and HIV/AIDS, Garrett employs a (very un-Christian) interpretation of the Bible to oppress gays. Likewise, gays are constitutionally unfit for elected office in Garrett’s book. He even supports “pray-the-gay-away” conversion therapy.
Jay Lassiter, PolitickerNJ Read more

Using Pay-To-Play as a Political Weapon
After more than a decade of experimentation with the idealistic notion that it is possible to take the money out of politics, the intricate rubric of local Pay-to-play ordinances has failed. Instead of reforming anything they have strangled public participation in government, restricted the most protected free speech—political speech, caused contributors to hide their campaign contributions from the public, and achieved nothing except to create a new tool or weapon for politicians to manipulate to gain a political advantage over their opponents.
Donald Scarinci, PolitickerNJ Read more

DNC 2016: Hillary’s turn and replacing Chris Christie
Participating in the historic presidential nomination of Hillary Clinton will be the top order of business for New Jersey delegates at the upcoming Democratic National Convention.
Bob Jordan, The Record Read more

New N.J. gas tax plan may not get far
Democratic leaders in the Legislature announced a new plan Friday to fund transportation projects by raising the gas tax, but Governor Christie’s cool response to the proposal is certain to extend a political standoff that has idled hundreds of construction projects across the state.
Christopher Maag, The Record Read more

What’s next with Democrats’ gas tax plan to end N.J. road construction shutdown?
The state Senate could vote as early as Aug. 1 on a plan to raise the gas tax and restart more than 1,000 idling road, bridge and rail construction projects across the state.
Samantha Marcus, NJ.com Read more

Trump presents dilemma for many Hispanics in N.J.
Juan Carlos Cinto is the kind of voter Donald Trump should be able to count on.
Mike Kelly, The Record Read more

Most New Jersey Democrats fully behind Clinton — but not all
New Jersey’s Democratic delegation heads into Philadelphia this week strongly behind presumptive nominee Hillary Clinton, but her primary campaign against Bernie Sanders has left some animosity in its wake.
Associated Press Read more

Which N.J. Democrats are sponsoring events at the DNC 2016 in Philadelphia
Democrats interested in succeeding Gov. Chris Christie as New Jersey’s next governor and all eight members of the party who represent the Garden State in Washington are among the sponsors of breakfasts and receptions for the delegates attending the Democratic National Convention.
Jonathan D. Salant, NJ.com Read more

O’Dea takes lead among JC mayoral hopefuls
The biggest news this past week has been that the Republican convention concluded without a LeBron sighting. Now the Democrats are tuning up the calliope in Philly to accompany the thumping of Trump. On the docket are those planned Kumbaya moments, the unveiling of a vice presidential candidate and, of course, the coronation.
Agustin C. Torres, The Jersey Journal Read more 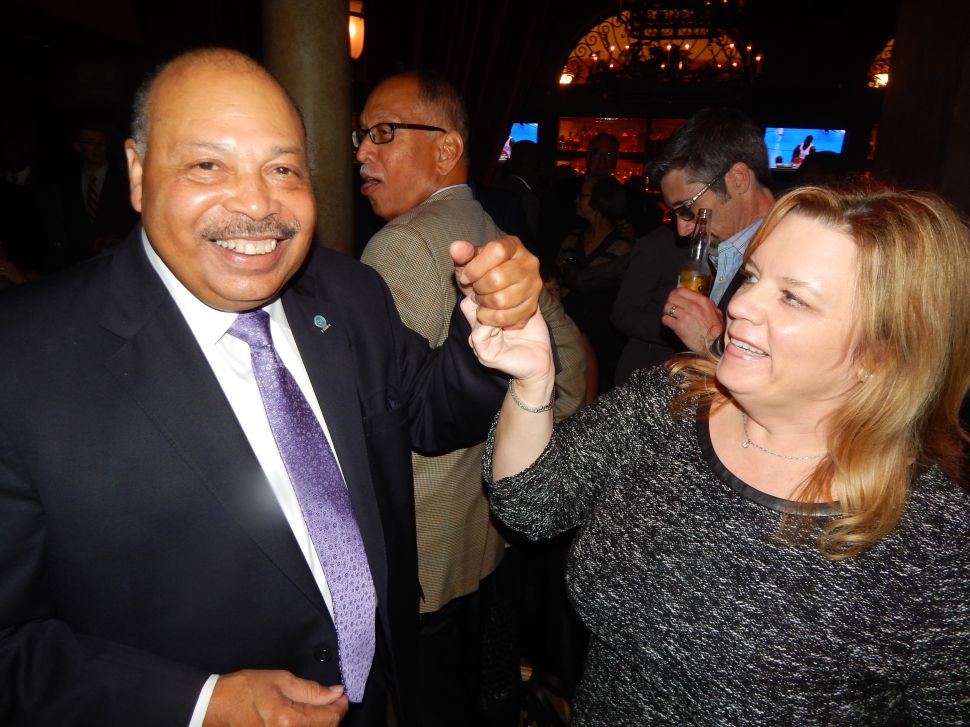