Following a damning Department of Investigation report about City Hall’s involvement in discussions on whether to lift a deed restriction on nonprofit AIDS hospice Rivington House, the Manhattan borough president and one councilwoman are aiming to change the process so the City Council has a say in whether deed restrictions are modified or lifted moving forward.

Two deed restrictions on the Lower East Side facility mandated it be utilized as a nonprofit and as a nursing home. The city lifted those restrictions and received $16 million from Allure Group, a nursing home company that purchased the site from its first owner, Village Car. Allure Group then got $72 million after it gave the site to luxury condo developers.

The report indicated it was made clear to the Department of Citywide Administrative Services that Allure could seek to sell the property for condo development. (The mayor has argued the city was misled.)

Manhattan Borough President Gale Brewer and Councilwoman Margaret Chin are calling on the City Planning Commission to make deed restriction changes subject to the city’s Uniform Land Use Review Procedure known as ULURP—an effort to take the power to modify or lift deed restrictions away from Mayor Bill de Blasio and into the hands of the City Council. Typically, for a process to get ULURP approval, it needs to support of its local council member—to whom the rest of the 51-member body typically defers on matters of land use.

The pair said a New York City Charter provision allows the commission to recommend new categories of land use changes to be added to the ULURP process, followed by confirmation by City Council legislation. They say the community lost Rivington House because the wrong agencies were handling the deed restriction process.

“It’s our DNA,” Brewer said, referring to the ULURP process. “It provides one, transparency; two, public input; and three, a predictable timeline.”

Although the mayor has promised deed restriction reforms, Brewer says it is not enough.

“I appreciate what the mayor has done in terms of his statement but $16 million is not sufficient, does not answer the community’s need and respect for the neighborhood which would include a brand new building that would house as many individuals,” she continued.

Chin, who said she and Brewer are employing a “common sense approach,” claimed that their proposed bill is the best option on the table. Without their legislation, she argues, the alternatives are to stick with a broken system that allowed for the loss of Rivington House and “hope for the best” or to come up with a brand-new system so that “we could then prevent more Rivington Houses from happening.”

“Like many of you, I read the Department of Investigation’s report. I’m troubled by what they found and I believe that those responsible should be held accountable,” she said, referring to the mayor’s statement that there would be no other punishments or firings in connection with the Rivington House investigation.

And the legislation has the backing of both Council Speaker Melissa Mark-Viverito and Public Advocate Letitia James, who say change in the process is necessary.

Mark-Viverito called the bill a “creative and transparent proposal,” arguing that she was concerned that the lifting of the deed restrictions for Rivington House did not involve “an extremely close, careful and conscientious review.”

“The outstanding questions the Council and the borough president have surrounding the sale of deed confirmations at both Rivington House and Dance Theater in Harlem make clear that we must implement a standard in the bulk process surrounding a loophole in leadership,” she said.

James, for her part, said the mayor’s reform proposals are a step in the right direction but that the city must go further.

“We appreciate the administration taking a step to improve this process, but we need real accountability, we need real transparency,” she said.

Queens Councilman Rory Lancman called on DOI Commissioner Mark Peters to take the de Blasio administration to state court to compel the administration to comply with the agency’s request for City Hall documents and computers. The DOI said it has not yet received the documents it requested and is reviewing enforcement options.

A spokesman for the mayor called it a “blatant publicity stunt,” noting that it complied with the city’s request for relevant materials but “lawfully declined” to provide unrestricted access to all City Hall communications, including communications irrelevant to the DOI’s investigation.

The speaker said she was not familiar with Lancman’s request but maintained that the fact that access to documents was made difficult “is also really troubling.”

Brewer is counting on an investigation by New York Attorney General Eric Schneiderman’s Charities Bureau into the deed restriction that required the facility to be operated as a nonprofit.

“They are looking to see if it was transferred properly,” she said. “So that might be a little bit of a hook…but for those of us who want Rivington House back, it’s our tiny little bit of hope.” 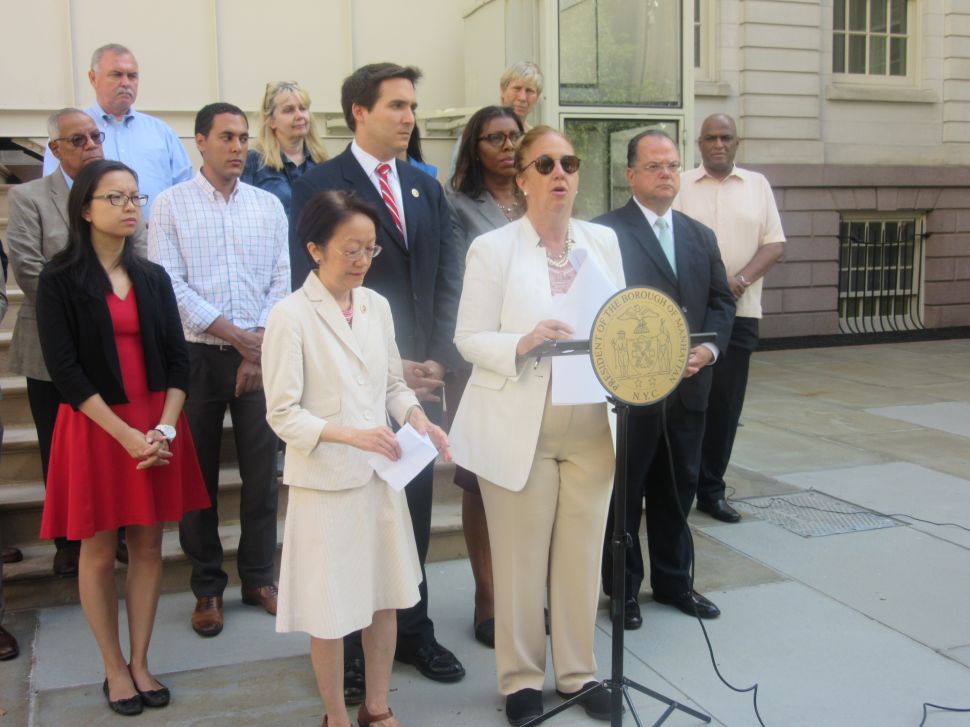