Elected officials and anti-police brutality advocates say recording police activity may be a First Amendment right, but that it’s time for the city to put that in writing.

City Council members introduced such a bill today at a press conference that featured some of them blasting what they deemed a “back-room deal” between City Council Speaker Melissa Mark-Viverito and the NYPD over the Right to Know Act, with one advocate even asking for her to step down.

The bill, whose prime sponsors are Councilman Jumaane Williams and Councilwoman Helen Rosenthal, would prohibit police officers or peace officers from preventing the recording of their activities unless the recording obstructs governmental administration. The bill also allows any individual who is prevented or discouraged from filming such activities to sue the city in state court.

Speaking in front of the City Hall steps this morning, Williams said one of his own staff members had her property damaged while she was filming activities at the Caribbean Day Parade. He acknowledged that although many institutions need to be reformed, the NYPD repeatedly states that more officers are needed to fix problems—but this, he said, is insufficient without policing being done in the best way possible.

“The Right to Record Act is in response to several instances where people are recording—which they are constitutionally allowed to do—and have either gotten arrested or gotten their property damaged, have had trumped up summonses,” Williams said. “So our officers too often are not following what the Constitution allows.”

The legislation comes in light of a spike in bystanders capturing incidents of police-civilian encounters on video.

Gov. Andrew Como handed the investigation into an off-duty NYPD officer’s killing of an unarmed African-American man in Brooklyn to New York Attorney General Eric Schneiderman after video emerged indicating that the man had not punched the officer prior to the shooting. A graphic video also depicted the shooting of Alton Sterling in Louisiana on July 5 at the hands of the police. The bystander who recorded the 2014 death of Eric Garner on Staten Island in an apparent police chokehold was the only individual arrested so far in that incident.

The introduction of the Right to Record Act made some question Mark-Viverito’s announcement that a package of police reform bills known as the Right to Know Act would be handled by the NYPD, which she disclosed to Council members last Thursday in a closed-door meeting.

Jazz Hayden, founder of AllThingsHarlem.com, a group that fights against police brutality and films police misconduct, said Mark-Viverito’s request for 1,000 more police officers when she first became speaker was a poor decision given the problems communities of color face with the police.

“We need to talk about Melissa Mark-Viverito being recalled. She needs to be recalled,” Hayden said. “She needs to step down and I think that’s the most important thing we need right now because all our problems begin in the political process.”

At a press conference prior to the Council’s stated meeting, Mark-Viverito said the recording bill was being introduced today.

“I don’t usually comment on bills that are being introduced,” she said. “I allow the process to go its course and be in conversation with the sponsors of the bills.”

She also said sponsors of the Right to Know Act had opportunities to meet with the administration and the advocates and that there were conversations initially with both Mayor Bill de Blasio and Police Commissioner Bill Bratton.

“The negotiations were based on the bills,” she said.

Councilwoman Inez Barron, who also criticized the speaker’s handling of the Right to Know Act, said police misconduct has been an issue for at least 20 years.

She said that although she was pleased Schneiderman would be handling the case with the off-duty cop in Brooklyn instead of Brooklyn District Attorney Ken Thompson, the NYPD is still giving the information to Schneiderman. 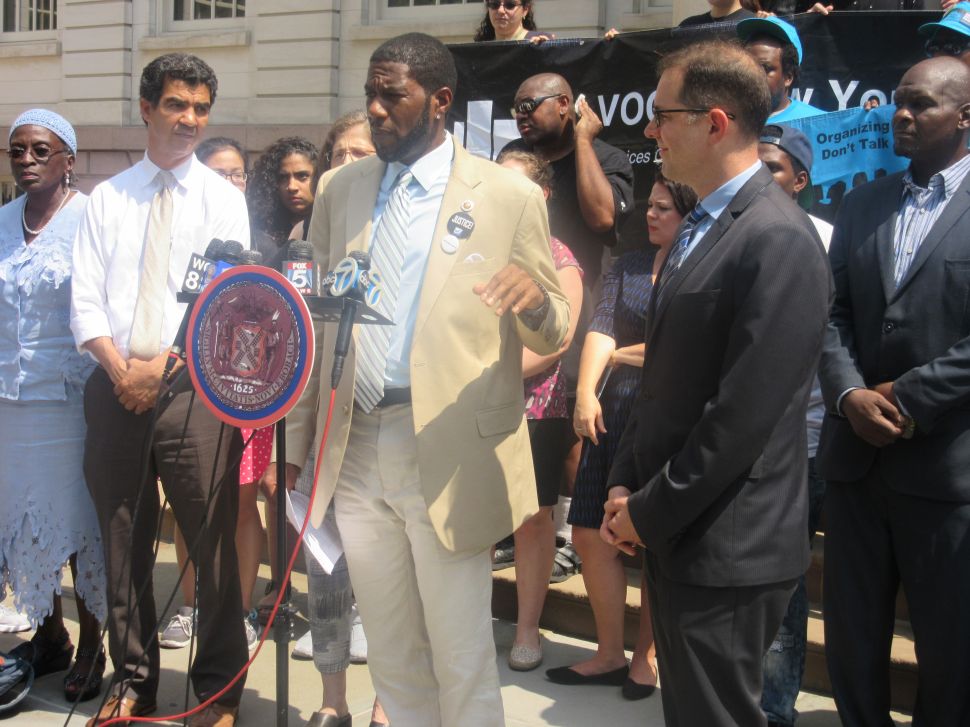