Netflix’s newest gem, Stranger Things, builds its world out of lost pieces of nostalgia for a time that probably never quite existed, but it does so in a way that shows it understands the power of the little things. One of my favorite recurring easter eggs is how frequently Stephen King’s books turn up at pivotal moments of plot development, and not just because I like seeing the creators of such a superb show acknowledge their own influences. No, the reason Stephen King’s presence stands out to me so strongly in this show is because he so keenly understand how to write magical children (and magical black people, but that’s a different matter). In King’s most terrifying and moving books, he places children at the axis of power and helplessness, and Stranger Things follows in kind.

The show’s plot centers on a mysterious young girl, L, who carries both a dark history and an astonishing power within herself. When we first meet her, she’s stumbling around the woods in a hospital gown and with a shaved head, ravenous with hunger. Though she’s obviously terrified of human contact, she’s hungry enough to overcome her fear and sneaks into a diner to steal some food. As the series progresses, we see her rise among friends, succumb to horrifying flashbacks, and tap into inner reserves of strength it seems impossible for any person, let alone child, to have at their command.

As a lifelong nerd, I can say with confidence that this is not a rare story-arc in sci-fi and fantasy stories. And yet, this one feels different than most – the emotional beats in this show are moving to the point of being occasionally overwhelming. L’s story, not just in her most fantastic moments but in fact more often during her mundane struggle to feel normal, is utterly relatable. For all her magical abilities she comes off as nothing more than a young girl trying hard to find her place in the world. The implication is that Stranger Things understands something about why the magical child trope recurs so frequently in our myths, literature, and media.

As it turns out, L’s story, like her trope, is not a particularly rare one. And while her highs and lows may be higher and lower than most of the abused children I’ve worked with, they are not so different in their effect on her life. The trope of the magical child almost always includes the baggage of a dark past the kid would rather forget. Unfortunately, this makes sense: life is a very stressful place to be, and a lot of people manage stress by taking it out on someone more vulnerable than themselves. And who is more vulnerable than the young?

So we see L and immediately, instinctively know something has gone wrong for her. A little girl shouldn’t be lost, hungry, dirty and abandoned, not in modern culture anyways. And when we see her like this, struggling to survive and forced by her own vulnerability to trust other human beings even after the atrocities they’ve done to her, it’s hard. When we see her struggle, when we watch her get abused in flashbacks, it is as hard to watch as it is unsurprising. These things aren’t supposed to happen, but they do. More often and more easily than any of us would like to admit.

This may be why we so commonly pair childhood horror with otherworldly strength in our fiction; because, though we understand that life isn’t fair, we like to believe that we’re wrong about that fact. There’s just something about the underdog winning that appeals to us frail Humans. For about half the world as it is today, the culture developed around the Old Testament – though David is small and outclassed, he overcomes Goliath through cunning, a kind of internal alternative to external strength. The idea that the weak may somehow learn to stand up to the strong appeals to our natural compassion.

Stranger Things pairs these twin traits so tightly – L’s strength comes at the cost of her vulnerability – and that is why it feels so real to watch this kid blast fools across the room with her mind. When working with survivors of child abuse, the sense I pick up in my clients is so often one of teeth-clenchingly rigid self suppression. Trauma and PTSD seize the body, they are the hands of an untrustworthy past, a past that threatens to leap its bounds and catch us in the present, to reach across the boundary of time to pull us physically into a different reality.

Current methods of understanding and working with Trauma and PTSD grow out of the work of Peter Levine, who was the first to locate trauma within the physical body. His work indicated that Trauma actually exists within us, that it is stored within the nervous system that runs through our body, and manages to hijack us physically as well as mentally and emotionally. Needless to say, the mechanism for this is…extremely complex, but the gist of it is that lingering Trauma is actually the result of conflicting survival instincts – the need to run or defend ourselves from danger which is overwritten by the need to placate our attacker and never processed.

When working clients through Trauma, I use a method called Trauma Dynamics, and the basic idea of it is to create an environment safe enough for a client to tap into these overwritten instincts and let them play out. How this usually looks is that a client will move slowly, fearfully into their past, carefully engaging with their scariest memories, and suddenly start violently shaking. It’s astonishing – people will shake the arms off of chairs, kick tied shoes off their feet, scream and holler louder than they ever thought possible. The work releases an internal power that they have spent their whole lives suppressing, and they come out of it feeling tired but stronger than they ever have before.

And it makes perfect sense: if you survived childhood Trauma, if you survived being the victim of an adult or group of adults during the most vulnerable period of your life, well, then you must be pretty fucking strong. But part of that survival means learning what sets off your tormentors and suppressing it. It is common among my clients who survived that, once they begin the process of addressing their Trauma, they develop a sense that they can pursue desires that previously they would never have dreamed of. We build our power in case we need it, but children are kind; we learn not to use our power because we don’t want to become like those who hurt us.

L’s recovery throughout the series mimics this process perfectly. As she learns to trust her body and her presence in this world, so too does she learn to use her power for what she wants, rather than to be forced to perform others’ will. And this in turn shows her a new world: whereas before her powers were linked to pain and isolation, as the series progresses they allow her to experience joy and community. Though her past never leaves her, it learns to stay in its world. Time passes and she heals, she grows strong; thankfully, there’s nothing strange about it. 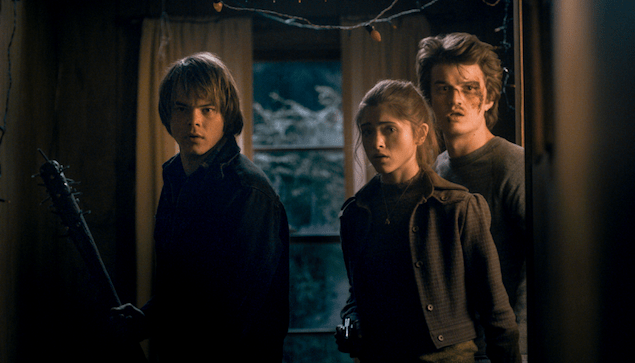