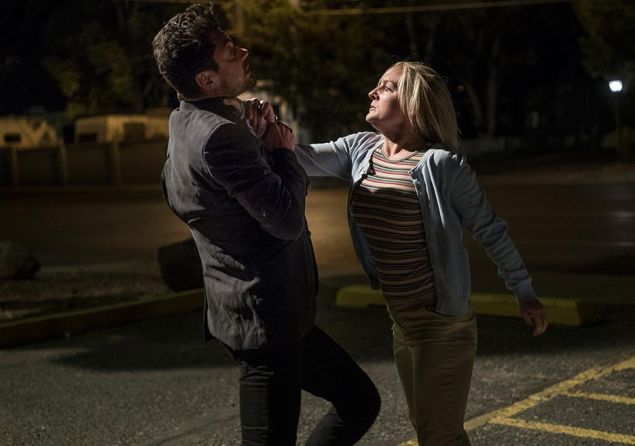 The fight scene’s what will get most of the attention, but my vote for the best moment in which Preacher gets physical this week is when Jesse and Cassidy stand around in their underwear. With their clothes in the wash after a knock-down-drag-out brawl with the angels that left an entire motel room looking like Jon Snow and Ramsay Bolton were staying in the adjoining suite, the two men (well, one man with an angel-demon hybrid inside him and one vampire) kick back with a morning beer and talk about their tattoos. Why? Because when you’ve got two guys in your cast with the physiques of Dominic Cooper and Joe Gilgun, why not? Preacher has been a show about spectacle and sensation from the start, and you don’t get more sensational than that.

So if there’s a problem with “Sundowner,” it’s not that heaping helping of eye candy, any more than the show’s bold stylization and blood ’n’ guts violence have been a problem as a whole. The generic Texas-shithole setting aside, Preacher has always been a heck of a thing to look at. The issue is what lies beneath, or more accurately what doesn’t. The glitzy surface conceals lapses in logic and a hollow heart that would easily have felled a less audacious and accomplished show by now.

Take that opening slobberknocker, in which Jesse, Cassidy, and their new angelic pals Fiore and DeBlanc rumble with a Terminatoresque member of the seraphim, a higher order of heavenly being than our cockney companions. The gag is that every time an angel on either side of the conflict dies, there’s a burst of light and blam, they reappear good as new even as their corpses lie nearby. This gives the fight its structure: Our heroes have to subdue the very powerful seraph without killing her, which proves near impossible; meanwhile, anytime Fiore or DeBlanc incur a particularly nasty wound, someone has to kill them, so they can “reinvigorate” intact and ready to rejoin the fray. By the end of the battle, the room is furnished with wall-to-wall corpses about two feet deep.

This, unfortunately, raises several questions. For starters, there are the usual ones: No one called the cops about the screams, the gunshots, the smashed furniture, the bullet-ridden walls, the chainsaw? No one’s worried that a massive pile of identical corpses will be hard to hide and even harder to explain? Then there’s the supernatural-storytelling stuff: All three angels die a dozen times, but the vampire is barely grazed and the very mortal Preacher doesn’t suffer so much as a broken bone? Was Cassidy not curious about the effects of angel blood on his vampiric constitution? Is no one ever going to confirm to Jesse that his new pal is the undead?

And so it goes. Jesse, at least, has the decency to act excited that he’s driving around with the angelic custodians of the power inside him — an entity called Genesis that’s been kept secret because it was produced by a scandalous relationship between soldiers on opposite sides of Heaven and Hell’s endless war. “Goddamn — angels!” he exclaims. But Tulip, whose encounter with Cassidy should have been no less of an eye-opener, is back to her old boring tricks: Showing up at Emily’s and throwing a “Stay away from my boyfriend” shitfit that she quickly, if half-heartedly, apologizes for; using her new pseudo-cordiality with Jesse’s right-hand woman to run errands that will ingratiate her to her holy-rolling ex. At no point does say anything like “holy shit, I fucked a vampire the other night,” let alone “Hey Jesse — yeah, you, the guy I’ve spent the entire series so far obsessing over to the point of stalking — the guy you hired to work for the church is a dracula.”

Then there’s the beat that ends the episode. Jesse blows off the angels’ warning that Genesis, “the most powerful entity ever known,” is not to be utilized in any way shape or form and decides to telepathically convert the whole town to the path of the righteous. But Eugene, the disfigured suicide survivor and town outcast whom Jesse helped out by commanding the mother of the girl he’d somehow wronged to forgive him, is strongly opposed. When kids at school start being kind to him (step one: not asking him why the makeup, “Arseface” effect aside, makes him a solid ten years older than every other teen on set even though actor Ian Colletti is only 19), he apparently feels he didn’t earn this trickle-down forgiveness. “It’s cheating,” he says. When Jesse blows him off and explains his plan, he doubles down: “You can’t make people see the light. They have to choose. That’s the whole point.” Inexplicably furious — seriously, he took attempted murder by an angel better — Jesse barks “Go to Hell, Eugene.” There’s the sound of fire and brimstone and strange gibbering voices, and then bam, Eugene’s gone. Dun dun dunnnnnnnn!

Which is cool and all, I guess, insofar as this sure seems like an arch-enemy origin story for the kid. But how can Jesse compel Eugene to go to Hell? Earlier in the season he couldn’t force Cassidy to name the governor of Texas, because the vampire simply didn’t know. The implication was clear: Genesis can’t force people to do the impossible, or conjure things from thin air. So unless there’s a special demonic loophole, doesn’t this mean that the only way the Preacher could successfully send Eugene to Hell is if the kid secretly had the power to travel to Hell all along? If he had paraphrased The Honeymooners and said “To the moon, Eugene!” would he have rocketed into orbit, or merely attempted to hijack a space shuttle?

None of this would matter if the show was convincing in its concern with metaphysics. As it stands, Jesse’s conviction that his possession of/by Genesis is the will of God, and therefore everything he does with that power is justified and fated, has no more emotional or even theological weight than the fact that angels reappear if you shoot them in the face. Until that changes, nits will be picked. 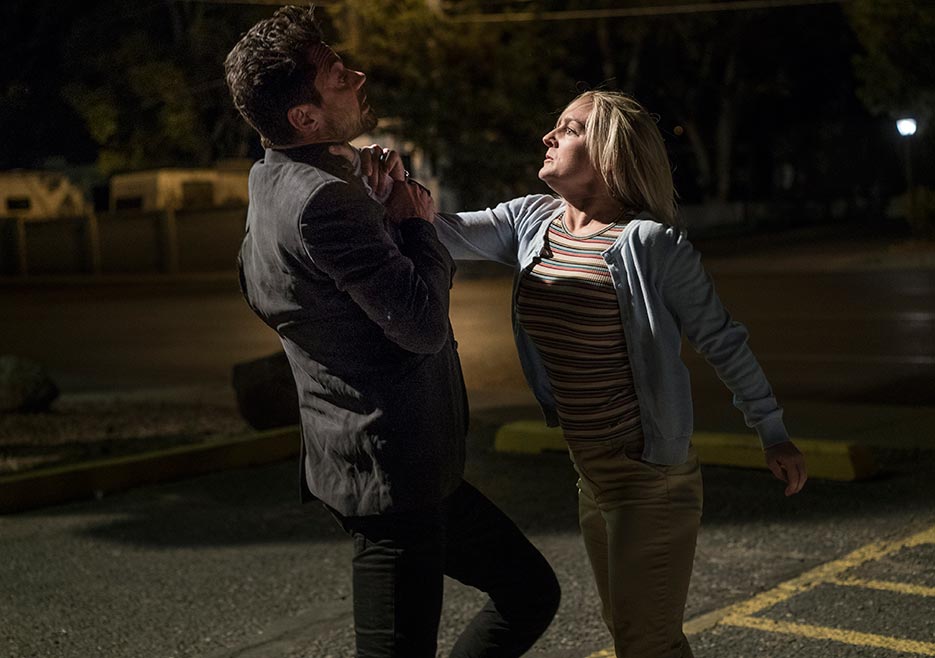