Jesse Custer’s in a really bad mood. Accidentally sending a teenager to Hell will do that to you, of course. The fascinating thing about “He’s Gone,” this week’s episode of Preacher and the first I’ve felt has anything more on its mind than what you might find in a college sophomore’s bathroom reading material, is the complex manner in which that bad mood is manifested. This was the first hour I’ve spent in Jesse’s company that left me wondering what he might do next — not in an “oh shit anything can happen on Preacher…and usually does!!!” way, which is as predictable as anything, but in a “human beings are complicated, difficult creatures and we probe their mysteries at our peril” way, which is the hallmark of television worth watching.

It’s worth pointing out that it’s not just the banishment of Eugene Root to the lake of fire that’s eating at Jesse. It’s the way the doubt this incident engendered kneecapped his confidence and kept him from fulfilling his plan to command the entire town to serve God using the powers of Genesis at his disposal. It’s his subsequent discovery that this command apparently wore off of Odin Quincannon, and that the “hyeh”-spouting local mogul has returned to sin and is demanding Jesse sign over his church and land to the power company as promised in their earlier deal. (Whether this means his murders of the Green Acre executives weren’t divinely ordained after all is impossible to, uh, divine at this point.) It’s his realization that if this is all what it appears to be — that he can condemn a kid to trans-dimensional perdition without meaning to, but can’t keep a local rival on the straight and narrow no matter what — then his conviction his new powers are part of God’s plan is as misplaced as his pal Cassidy says it is. The fact that Cassidy is a vampire, and that Tulip knew and covered it up, doesn’t help either. All of these discoveries take place on the very day that was to be his biggest triumph — the telepathic conversion of the entire town. No wonder he’s locked in a binary of blithe denial and surly cruelty. What good’s the power of a god if you can fuck up just as bad with it as without it?

This is not to say that Preacher has straightened itself out entirely. Gaps in emotional and storytelling logic remain troubling: the glib way in which Tulip has taken the existence of vampires in stride; the extent of Jesse’s power to command (this seems to be deliberately in flux at the moment, but I still find myself wondering what Eugene’s one-way ticket to hell means for the Preacher’s abilities); the strange story of Eugene and his apparent attempted-murder victim Tracy Loach, and how anyone can get away with shooting the prom queen in the head even if his dad is a Texas sheriff, et cetera. To quote Cassidy on The Big Lebowski, “You know, everyone says that it’s not supposed to make sense, like ‘That’s the whole point, dude,’ and I’m just saying that’s an excuse for lazy storytelling!” Flashbacks to Tulip and Jesse’s unhappy childhood together are more internally consistent, but they’re also more or less dead weight — I mean, did anyone think they had a happy childhood? And Tulip’s adult iteration remains a one-note annoyance, no matter how nice she is to her drunken uncle.

But for once, Preacher gave us more to sink our teeth into than empty-calorie spectacle, dorm-room philosophizing, and bobbled storytelling. There’s an earned savagery in Cassidy’s confrontation with Custer outside the church, when Jesse haughtily clings to his “it’s all part of the plan” narrative and Cassidy proceeds to tear it up in the name a teenager who, whatever his sins, did not deserve to be dumped into Hell and forgotten. There’s wincing cruelty in Jesse’s mockery of Tulip’s bad family and worse cooking when he turns on her for hiding the truth about Cassidy. There’s obvious, unspoken love in Emily’s eyes when she tells Jesse she believed in him from the moment she saw him, and recognizable self-loathing bitterness turned outward in his voice when he responds “Well, that was stupid.” These people (well, people and a vampire) felt like people for the first time. Can I get an amen? 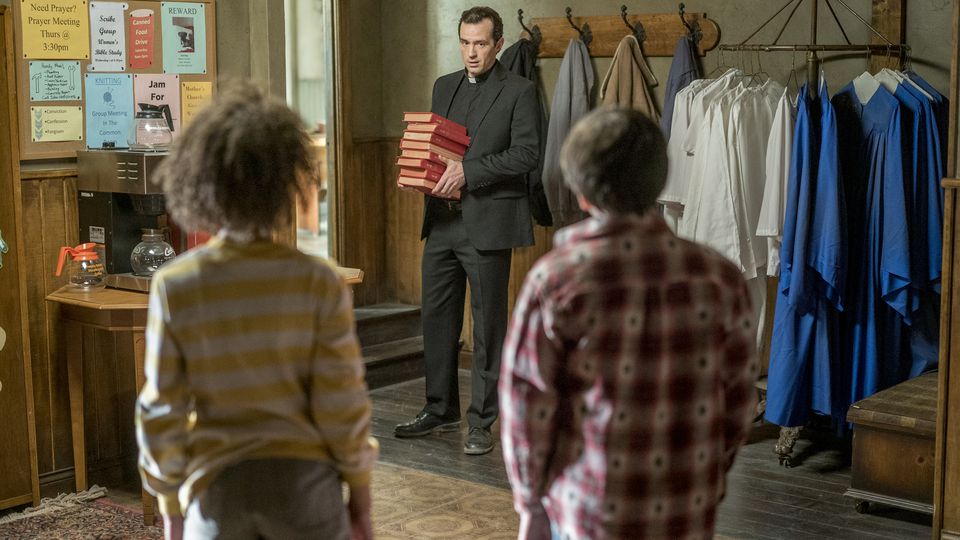