If you want an object lesson in how Preacher is just about half a head shy of being an actual good show, you could do worse than to look at this week’s episode. ‘El Valero’ could be considered a climactic installment, insofar as Odin Quincannon’s forces succeed in taking back the church from Jesse Custer, while the angels fail in removing Genesis. But nearly everything that happens hints at greatness, or at least damn goodness, that goes frustratingly unrealized.

Take Odin Quincannon. This episode begins with a flashback to what amounts to his origin story: He lost his entire immediate and extended family to a ski-lift collapse while he was stuck at home working, then went slightly mad and disemboweled both a cow and his daughter’s corpse to “prove” that the idea of a human soul is bullshit. Yes, the Quincannon family’s totally-‘80s wardrobe and hairstyles are played for laughs, and yes, Odin’s over-the-top reaction is there for the gross-out factor. But at least once it becomes clear that this wasn’t a murder he orchestrated — i.e. an attempt by the show to demonstrate just what a badass bastard he is — but a genuine, tragic accident that cost children their lives and broke a man’s spirit with survivor’s guilt, the performance by Jackie Earle Haley as the grief-stricken, mad-at-god meat magnate thrums with real sadness and anger and hate. His reversion to type throughout the rest of the episode — barking sarcastic orders at his men like the opening scene had never happened — cuts the impact off at the knees. (Or shoots off its dick, as the show would likely have it.)

Or consider the townsfolk’s reaction to the siege of the church. Despite their newfound piety over the past few weeks, apparently they’re all gung ho about watching Jesse and the Quincannon goons exchange gunfire. Once the initial attack is repulsed (and I do mean repulsed — I wasn’t kidding about dicks getting shot off) and word gets out, the people of Annville set up blankets and lawn chairs to watch the battle, like wealthy Washingtonians picnicking at Bull Run or Israelis gawking at the bombing of Gaza. But a series this glib about violence is never gonna have much of value to say about people’s propensity to treat it as entertainment; after all, isn’t that half the point of the show? So it quickly devolves into country-music redneck stereotyping and the half-hearted sight gag of many of the prominent residents, including that ever-present high-school mascot, lined up to stare at the firefight. There’s really nothing wrong with taking a Mortal Kombat/Evil Dead approach to violence, but a potentially provocative set-up like this is just a waste of time if you’re going that route.

How about Tulip? The one time Jesse really could use the help of a professional ass-kicker is, of course, the one time so far in the entire series that she’s not up his ass. Instead she’s adopting a dog from a shelter, then inexplicably bonding with it before feeding it to the recuperating Cassidy, who I guess she rescued from burning in the sun and is now nursing back to health. For a town that subsists solely on slaughterhouses, this seems like an unnecessarily taxing way to find animal blood for the guy to drink, no? Moreover, given the situation at the church, you can practically hear the writers’ room discussion about how to temporarily take Jesse’s two killer friends out of the picture. This hound-sacrificing sabbatical feels forced.

And what of poor Eugene? Accidentally banished to hell by Jesse a few episodes ago, his return is — at first — eerie and compelling. He crawls his way up through the gravel beneath the church, his hand reaching out to Jesse for help. He’s not angry or transformed by the journey, just paranoid he’s being tricked and very, very thirsty. And he has the single best line of the show so far: When he tells Jesse that he heeded the command of his magic voice and simply dug his way back up to Earth, the amazed Preacher asks, “You dug outta Hell with your hands?” “It’s not that far,” the kid replies, his eyes wide with ominous knowledge.

Unfortunately, nothing I just described even happened. “Eugene” is just a hallucination brought on by the Preacher’s guilt, or something. Many a TV critic has wrestled with this narrative device over the past few years, as show after show after show has introduced characters who appear real but are merely figments of some other characters imagination. This, I guess, is where I draw the line. In an episode where Jesse spends much of his time allowing two actual angels to attempt to draw forth a godlike entity from his chest while his ex-girlfriend feeds dogs to a wounded vampire, do we really need an imaginary friend, too? 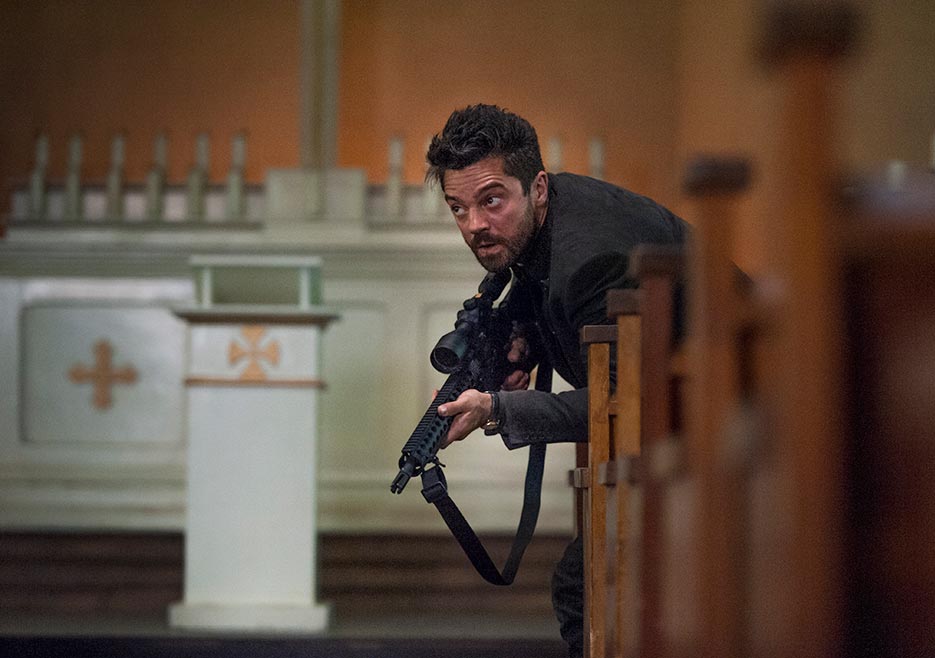