I’ve been hard on Preacher, and that’s never been harder on me than this week. By any objective measure last night’s episode, “Finish the Song,” ended with the sort of sheer convention-shredding narrative audacity every TV critic worth their salt would commit at least a misdemeanor offense to see more often. It’s actually heartbreaking to how far the show is willing to go, and how hard it works to get there, only to watch it fall short again.

Before we get to that big tear-down-the-wall sequence, however, there are other cracks in the edifice to observe — the same deficiencies in plot logic and character consistency that have bedeviled the series from the start. The angelic duo of DeBlanc and Fiore, for example, end the episode hiring a hitman from Hell to kill Jesse so they can remove the Genesis entity from his body. But they had every opportunity to kill Jesse themselves in the previous episode: He was attempting to cooperate and had let his guard down, his vampire and hitwoman besties were out of the picture, and they’d successfully convinced the sheriff and the army of Quincannon goons outside the church that they were government agents. Why go through this whole highway-to-Hell rigamarole when they could have simply shotgunned him themselves?

While we’re on the subject of the angels, Preacher waited until the season’s penultimate episode to reveal that they’re an item. (Indeed, given DeBlanc’s comments about how lucky Fiore is not to know Hell the way he himself does, it’s entirely possible he’s actually a demon and they’re Genesis’s parents, but we can bookmark that for next week.) They’re likeable characters brought to life by endearing performers — Anatol Yusef’s Meyer Lansky on Boardwalk Empire has earned him a lifetime pass in my book — so their sudden show of concern about the possibility of being separated for eternity is tender and sweet. But as a couple, they’ve displayed zero sexual or romantic chemistry at any other point in the show. I get that they’ve got their hands full, but that hasn’t stopped sparks from flying between any of the heterosexual pairings on the program. Failing to establish their connection makes this reveal feel less organic and more like a gimmick.

A far more baffling personality swerve takes place for Emily. Until this week, while her work for Jesse had gone underappreciated and her feelings for him unrequited, she was a fundamentally good-hearted person, Christian, mother, and friend. When Tulip lets her in on the secret that Cassidy is a vampire, she takes it no more or less inexplicably in stride than every other character on the show. (Seriously, within minutes of learning that the dead can rise again and walk the earth to drink the blood of the living, she’s passive-aggressively sniping with Tulip about her love life.) Yet of all people, she alone somehow proves willing to sacrifice an actual human being to Cassidy to help heal him — and it’s her longtime fuckbuddy Miles the mayor, whom she lures to the house of horrors like a practiced black widow. Sure, he was a tool about Jesse’s fight with the Quincannons, but nothing we’ve seen about Emily before would indicate she’d be willing to murder the guy for it, or murder anyone for any reason for that matter, let alone on behalf a person she didn’t much like before she discovered he was the goddamn undead. Why the sudden change for the person who passed for the show’s moral center?

While Emily displays a heretofore unseen penchant for feeding people who’ve fixed her kids breakfast to monsters, Jesse, we learn, had a heart of gold regarding Cassidy after all. Turns out the Preacher did attempt to rescue the vampire from the sun, when he (rather inexplicably, come to think of it) exposed himself to its harmful rays in order to determine whether or not Jesse was a fundamentally good person, or something. As with DeBlanc and Fiore’s relationship, keeping this information secret for weeks and revealing it now ads nothing of value to the show or our understanding of its characters. It simply created artificial suspense regarding whether Jesse had really gone off the deep end enough to allow his friends to die, so that the shootout with the Quincannon boys and the business with Eugene could get a little extra juice. It’s a bait and switch, in other words. We should have been told from the start.

Only after we get through all this do we come to the episode’s grand finale: a multi-minute, in-depth re-airing of nearly everything we’d already seen involving the mysterious cowboy from the Wild West many years ago. It’s an unbelievably audacious move—literally so, in the sense that I was so convinced they couldn’t possibly be showing so much previously aired material that I wondered if something was wrong with the stream of the show. It takes until the very end of this seemingly endless sequence, when after re-showing the massacre that began the episode, the events appear to reboot and start up again back when the cowboy first set out to get medicine for his sick daughter, that its meaning and purpose becomes clear: He’s in Hell, and his personal version thereof is reliving these awful events over and over.

But sadly, much as I want it to, this bold storytelling choice doesn’t work. First, the lead-in provided by the rest of the episode doesn’t leave one charitably disposed, for all the reasons described above. It’s especially hard to feel the show is genuinely condemning the cowboy’s violence when it not only keeps showing it in spectacular, unrealistic detail, but when it also turned its kindest character into a cold-blooded killer. Second, the initial repetition goes on for too long to get to a point (he’s in Hell) that is retrospectively crashingly obvious, and requires no further repetition to make clear, though that’s what we wind up getting and then some. Third, while I can appreciate what the show was going for by stringing the cowboy’s scenes out from episode to episode throughout the season, it’s hard to argue that the payoff tied them together in a way that argues for the necessity of doling them out piecemeal when that payoff itself actually puts them back to back via that initial repetition of minutes of screentime. You’re left wondering whether they’d have been better served as a standalone episode — sure, the audience would scratch their heads for a while, but no more than they did anyway. Now we’re left with a Confederate-veteran mass murderer and child-killer, squaring off against our hero as a finale. Even as a matter of rooting interest, it’s inert. All that effort for a boss fight, basically. There may be one episode left, but it sure feels like game over. 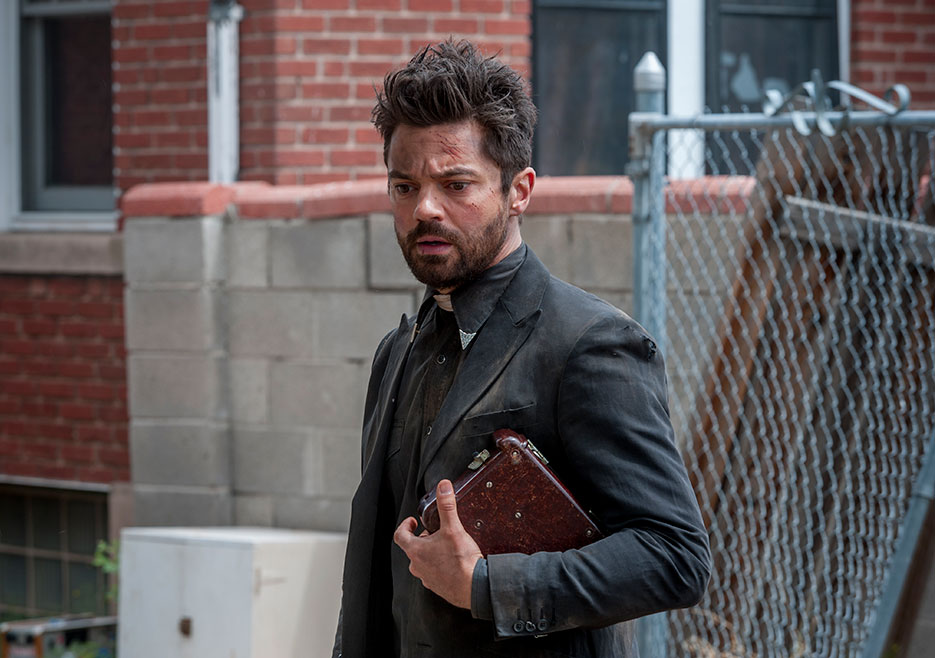