Historically, in multiple-party political power relationships, one party is often stronger than the others. The Romans used to call their weaker parties “vassals.” Rome’s vassals did not vie for power and prominence. Vassals knew their place. Rome was clearly the undisputed and powerful host. The vassals’ roles were determined and doled out by Rome.

In parts of the Middle East, particularly Syria, the role occupied by Rome is now occupied by Russia. Russia is a master at such relationship games. The Russians have gathered power and momentum using the same model used by the Romans and with the same success. Today, Russia is king of the mount. And, just as in days of yore, vassals do what is expected in exchange for protection. The equation is very simple, but hardly equal.

Russia’s purpose was to teach Assad a lesson: You are ours, you are nothing without us.

And Russia has made it very clear to Syria’s thug-in-chief Bashar al-Assad that although he might bear the title of president, the title means nothing. Russia controls what happens in Syria. Vladimir Putin pulls the strings, Assad is his puppet.

Russia recently decided to remind Assad of their special relationship. In a move reminiscent of the way in which his predecessor Mikhail Gorbachev was removed from power, Putin taught Bashar Assad a lesson.

These events are described in an intelligence report in Hebrew produced by the Israeli military intelligence website Debka. AP ran a very short piece and then both the FoxNews website and CBSNews website ran pieces touching on the issue.

In piecing it all together, this is what happened.

A junior Russian officer called the Syrian presidential palace saying that he had an extremely important message for the president. He said that the important and very sensitive message was meant only for the ears of the Syrian president himself. Assad swallowed the bait and took the call—and then he was hooked and reeled in.

The Russian emissary told the president that a very special guest had just arrived in Syria and the guest needed to speak to him immediately, face to face at the Russia airbase in the Latakia province in North Western Syria. No advisors and no advance team, just bare-bones security and his personal Russian Arabic translator would be allowed to accompany the president.

Assad, quite naturally, assumed that Russian President Putin himself had secretly arrived in Syria to deliver an important message of support. Assad jumped into his private plane and hightailed it to the Russian base where his plane was met and, upon disembarking, was taken to the Russian base commander’s home. Assad’s security team, meanwhile, was not permitted off the plane. Only the translator accompanied him. This was too sensitive for anyone else to hear.

When Assad entered the home he was surprised to see not Vladimir Putin, but Sergei Shoigu, Russia’s defense minister.

Once a leader is stripped of basic, essential knowledge, once he or she stands alone with no security detail or entourage, even for a single moment or event, they cease to be a leader. At that point, the leader turns into a vassal.

Russia’s purpose was to teach Assad a lesson. You are ours. You are nothing without us. And whatever you think is happening around you is not what’s happening. You, like everyone else, receive information on a need-to-know basis and it is Russia who decides what you need to know and when you need to know it.

To say that President Bashar Assad of Syria, son of Hafez Assad, was humbled is to state the obvious. He stood there alone, politically stripped and stark naked in front of his Russia superior.

There is no doubt that, right now, Russia needs Assad to stand as figurehead. No other Syrian personality is able to confront ISIS and al Nusra, the local al Qaeda affiliate, the way Assad can. But Assad must do whatever he is told to do, nothing more and nothing less. And if and when the moment arises that he is no longer useful to Russia, it is now perfectly clear to Assad—and to all of us observing the situation in Syria—that he can and will summarily, and probably unceremoniously, be dispensed with. 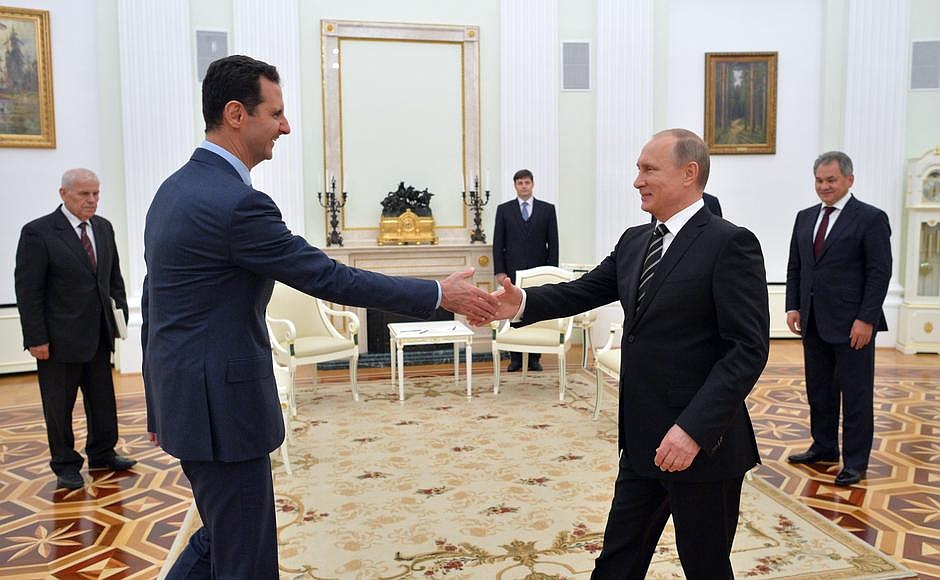