The funny thing about television (and, well, life) is how easily a viewer’s opinion about a character can change. And this episode for me was a bit of a game changer. Alliances shifted, roles were swapped—it was like an episode of Game of Thrones, where the characters you love most are summarily murdered, and sworn enemies make peace.

It was bewildering to find myself changing my opinion about everyone on this show in a single episode. I mean, it has happened before: I used to love Jill Zarin, but when she turned on Bethenny I didn’t just hate her, I loathed her. But this episode did more than just change my mind about a single cast member. My opinion changed for almost all of them (except for Countess Lu because she’s still self-centered and vile). People I used to love – Bethenny, Carole, Dorinda – are now in my Real Housewife Burn Book.

First up on my hate list: I am so disappointed by both Bethenny and Carole. Their insensitive remarks and their cavalier attitude make them seem like the ultimate “mean girl” clique. When they are together, their thoughts and opinions move in unison, acting like citizens of an authoritarian dictatorship where noncompliance is unacceptable. And it’s frustrating to see them steamroll Jules, who doesn’t have a mean bone in her body and whose tiny body throws doubt on whether she could even hurt a fly.

The fight at the table started off pretty benign – with Jules bringing up nonsensical issues with poorly worded statements in a timid, deferential voice. But then, something snapped. No, that wasn’t the sound of Jules’s tiny arms cracking under the pressure building in her brain. That sound was Jules’s strangled voice as she struggled to raise her meek voice in attack.

And then, Jules’s screeching soon started sounding like a never-ending bullhorn, her words careening into one another, until they smashed together to form long, incomprehensible words. Bethenny sat there, dumbstruck. Bethenny thought she had been more than cordial by welcoming Jules and keeping her confidence. She never saw this stream of verbal abuse coming. Quite frankly, I even don’t think Carole and Bethenny ever thought that Jules could stand up for herself.

But there’s more to it than that. Bethenny revealed that she didn’t want Jules to be a part of the cast. I don’t know if this happened before or after Jules was cast, but it’s become painfully obvious that Bethenny had been intentionally icing Jules out, leaving her out of things, acting cold toward her. Because Bethenny is the “teacher’s pet” of RHONYC (and possibly of the whole Real Housewives franchise), I would not be surprised to see her try to get Jules kicked off the show. I mean, it’s worked before…

Anyway, apparently Bethenny is uncomfortable around Jules because of her eating disorder. Growing up in a dysfunctional home with a mom who had an eating disorder, Bethenny is very sensitive to this kind of issue. Even though she respects Jules’s openness about her food issues, the issue itself makes Bethenny uncomfortable. And the fact is, this entire show revolves around food: the catty events, the restaurant battles, the coffee shop gossip. And so Jules’s food issues are observable and put on center stage whenever they film together. Faced with such obvious displays of disorder, Bethenny shrinks back and doesn’t allow herself to get overly friendly.

I understand Bethenny’s point of view, but the way she spoke to Jules during their cacophonous confrontation was nothing short of obnoxious. Bethenny was dismissive and disgusting. She had no regard for Jules’s feelings because, at the end of the day, she doesn’t care about Jules. To her, Jules is a colleague who she only interacts with when she is paid to do so.

It is why she was so confounded by the confrontation. She really didn’t think that their “friendship” was anything close to that. She thought that their relationship was casual, that Jules was someone who was nice enough and mild-mannered enough to invite to producer-sponsored events, but not someone who she would ever invest any time or energy into. And when she realized that Jules didn’t get that memo, she was more incredulous than outraged.

Carole, on the other hand, showcased her ignorance. For someone so intelligent, her inability to understand Jules’s eating disorder is mind-boggling. Especially when she states that she “knows about denial.” Jules is as far from denial as one who has such a disease gets – she is extremely open and honest, even telling the women that she made herself throw up three days prior to prove how open she is. Perhaps Jules’s insistence on talking about it and all the gory details points to denial, to Jules being disingenuous. But it wasn’t Jules who was being disingenuous here (who couldn’t be duplicitous even if it hit her in the face) – it was Carole, saying she thought Jules was a nice girl, while at the same time treating Jules like shit.

I was also disappointed in Dorinda. After weeks of being the hero of this show – helping Bethenny with her medical issues, helping Sonja clean out her basement – Dorinda’s streak of glory has come to a screeching halt. Dorinda isn’t just helping her castmates, she’s “helping” them; stirring up shit in the guise of a peacekeeper. Last week, we found out that Dorinda backstabbed her longtime friend Ramona by telling Luann what Ramona had said in frustration. And this week, Dorinda had told Jules what the other women – namely Bethenny — had said about her, thereby reinforcing Jules’s insecurities. It’s obvious that her status as “helper” has gone to her head. Her self-righteous attitude about her “help” is also a huge turnoff, plus she’s still with that beady-eyed Slimy Johnny so she’s now officially on my “dislike” list.

As for Ramona – I am falling hard for her. When she avoids fights and drama with likable cast-mates, everything she does and says is the stuff of pure comedy. Being the voice of reason with Luann, telling her off and then managing to still laugh together as they walk into the sunset? Priceless. Taking a dark moment of tension at Dorinda’s dinner and turning it into an opportunity to arrange a “girl’s trip” to gamble and get drunk at Mohican Sun? Classic. You really can’t help but to like her.

And so, a few days later, the women boarded a party bus headed to Mohican Sun. As soon as Sonja stepped on the bus, Bethenny pulled her aside to talk to her about their fall out earlier in the season. Because, after weeks of avoiding Sonja and escaping from whatever room Sonja walked into, Bethenny finally decided to forgive her.

Sonja is sentimental person. When she allows herself to be vulnerable, that sentimentality is what makes her so lovable. Lovable to the point where even callous, cold-hearted Bethenny can’t stay mad at her; despite the fact that Bethenny essentially disowned her. Sure, Sonja can be delusional. Her dinner party the night before, with her borrowed butler (courtesy of her ex-brother-in-law) and inherited bone china, is classic Sonja delusion. But her cheery honesty, both to the viewers and her guests, renders her delusions of grandeur as an eccentric quirk, rather than a sign of deeper issues. This is the “fun” Sonja that Bethenny was talking about: the breezy, easygoing party girl with a penchant for having a good time. And this shift in attitude allows Bethenny to feel more comfortable about going on the “girl’s trip.”

Which is a good thing, because at that point, Bethenny and Jules were still at odds with one another. And Bethenny, not realizing that Jules overheard her, explained to Dorinda why she felt nothing toward Jules. She didn’t hate Jules, it was worse than that: she was indifferent.

As for Luann, that man-stealing harpy finally landed her prince charming. She had the perfect excuse to miss this godforsaken work trip to Mohican Sun – she got engaged. And, with an eight-carat canary diamond ring, these women can suck it. In a classic “Class with the Countess” act, Luann didn’t tell any of these women that she got engaged. They found out from the most noble, and proper kind of engagement announcement: the media. 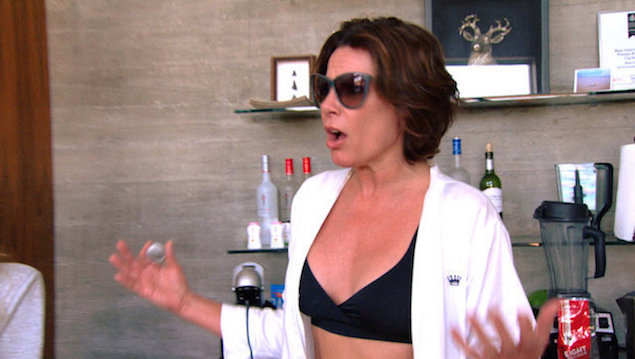