So it finally happened. This episode, the women finally got to go on their contractually-obligated annual Housewives work trip. No, it wasn’t an exotic getaway to Mexico. It wasn’t even the exotic, yet domestic getaway to Hawaii that Dorinda managed to finagle her status as “trip planner.” Instead, the Housewives all headed over to Miami – a mere two-hour plane ride.

It’s so the opposite of exotic for these women, that our resident spoiled brat Ramona was disappointed upon hearing the news from our resident shit-stirrer, Dorinda, over lunch (which included Sonja and Lu). After all, Ramona goes there, like, all the time. A trip there is practically like taking a trip to the bathroom. Because Ramona goes to the bathroom at least 12 times a year. Which, I guess if you’re not fond of being sanitary, is normal and all. Rich people are weird. Well, maybe just Ramona.

But the star of this show (and the original hostess of this work trip) was the reason for this second location change. See, Bethenny was still sick. And her skiing trip with her daughter (the one that warranted a mini intervention session with her assistant last episode) was kind of a disaster. The bleeding got really bad, which lead Bethenny to finally accept that her fibroids were getting too big and that she needed surgery. So Miami is the perfect place for her to fulfill her work obligations – the flight is short and, if necessary, she can hop back over to New York relatively quickly and easily.

Not everyone was disappointed; love-struck Lalaland Lu was over the moon with excitement, because she had planned on going to Palm Beach with Sugar Daddy Tom to celebrate her engagement on some yacht. And so she decided that Tom would of course have to join their trip.

Ramona was pissed. Not because she was jealous of Luann’s love tank being filled to the max, but because to bring Tom would be a violation of the cardinal sin of a girl’s trip: to invite members of the male gender (gay best friends moonlighting as the Housewives’ resident stylist are exceptions to the rule). And dear Ramona, as far as I can recall, is known to be the originator of the core rules of a Housewife girl’s trip. This is the same woman who criticized former Housewife Alex for dragging along her creepy husband Simon to every Housewife-mandated gathering. For Ramona, the thought of boyfriends or fiancés or husbands coming on a girl’s trip is too horrifying a notion; one which merits a look of abject disgust.

After lunch, Sonja and Ramona joined Jules for some shoe shopping to prep for the Florida trip. And as they pondered over whether a suede lace-up sandal was appropriate for the pool, Ramona announced that she was pissed off with Luann. And not just for wanting Tom to tag along with them to Florida. Luann had asked Ramona not to say anything to the press about her and Sonja’s past dating Tom. But then, at a fashion show, Luann told the press that she didn’t care that Ramona and Sonja dated Tom because it’s BL – before Lu.

Ramona wasn’t so much upset that Luann spoke about her, but that Luann was misquoted and indicated that Ramona and Tom were friends with benefits. Ramona is old-fashioned and private about her relationships, and doesn’t like when her relationships become public knowledge, especially if the relationship is purely casual. This whole season (and last season for that matter), Ramona has been overly discreet about her dating life, sharing nothing more than a wink and a knowing smile.

Later, Dorinda, Carole and Ramona gathered at Bethenny’s apartment to hash out the trip logistics. Luann, despite not attending this logistics meeting, still managed to control a portion of the trip’s itinerary. Apparently, Lu’s friend owns a yacht in Palm Beach and arranged to have the Housewives spend the weekend on the yacht, with one night dedicated to throwing a proper engagement party. So instead of merely going to Miami, the group would begin the trip in Pam Beach before moving on to the Dorinda-planned, Miami portion of it.

And although Bethenny was invited to the Palm Beach-portion of the trip, she got a literal hall pass, a doctor’s note, allowing her to miss the yacht party. Because the party involves Lu’s Tom – the man sexually involved with two other Housewives, both of whom would be attending – Bethenny was happy that her busted uterus allowed her to avoid the inevitable drama of an engagement party situated on a claustrophobic boat with no escape.

However, Carole unfortunately still had to go to Lu’s shindig in her continuing quest to take the “high road.” But Dorinda assured her, over the phone, that at least she could approach it like an investigative reporter. It’s a temptation that Carole could not resist.

Jules headed down to Florida a day early, to Boca, to visit her parents – Kazue and Gene, who have been married for 36 years. While there, Jules Facetimed her kids, with Rio being cute saying she wanted cake for her birthday. But then, we the viewers witnessed a heartbreaking moment: her 5-year-old son was crying, begging his mom to call his dad to find out when he was coming home. He sounded panicked, scared. Like he wasn’t used to not having a parent around, even if it just meant having one in the periphery as he is attended to by a nanny. The sting of her son’s fear and sense of abandonment is just another stab in Jules’s heart (and another step toward the ultimate demise of their marriage). She always takes over when Michael is gone (which is a lot), but he won’t reciprocate. He doesn’t see the kids as a responsibility, or something he needs to contribute to. They are just there to play with and hand over to others the moment responsibility is involved. Like changing diapers or bathing them or giving them dinner. And, in that moment, where Jules was surrounded by loving, supportive parents who clearly adore and respect one another, I truly felt her profound sadness and loneliness.

As for Sonja, she is on a roll. After successfully making up with Bethenny, she’s had an epic upward trajectory that has made me fall in love with her all over again. When Ramona asked Dorinda at the airport in Palm Beach if Luann was still saying negative things about her, Dorinda responded no. But Sonja cut in, asking Dorinda if she was trying to start things. And then she mimed, in an exaggerated fashion, stirring a pot as she asks, “you wouldn’t be stirring the pot,” asserting in her talking head that Dorinda is the “stirrer of all stirrers” and that she talks out of both sides of her mouth. Her ability to cut through the bullshit is a quality she shares with Bethenny. But whereas Bethenny can be cutting, Sonja is flighty enough and silly enough to put her target at ease, to laugh along at the criticism she throws their way. She even got Dorinda to admit to her schemes, something only a person like Sonja could achieve.

But Sonja’s critique didn’t sink in too far. Because, what do you know – Dorinda started shit again. As soon as the rest of the women went down to their rooms on the yacht to change for the hot tub, she began talking to Luann about Ramona – how Ramona was upset about Luann talking to the press about Ramona’s and Tom’s former relationship. Dorinda sucks in her role as a shit-stirrer. Why can’t she just go back to being the nice, normal Dorinda? Dorinda, no one cares who put the story in the press. Stop trying to make shit happen. To channel Taylor Armstrong of RHOBH fame: “Enough!”

But Lu’s story is suspect. Saying the story got picked up because you posted an Instagram picture of you and Tom golfing with the caption, #love, is bullshit. You said something. You were quoted. Own it. Stop trying to minimize what Ramona says by calling her an idiot. Everyone (except Delusional Lu) sees through that.

Meanwhile, over in Miami, Bethenny was laying out on the beach with her friend Sarah, discussing, what else, the gossip of the moment: Luann’s relationship with Tom. Bethenny had received incriminating texts about Tom that could blow up this whole engagement thing. My guess? That he’s been cheating on her. Which wouldn’t be such a revelation since Lu’s previous relationship with the Count was known be an open marriage.

But it’s possible that Luann doesn’t know that he’s with other women. The whole summer, before the season started filming, Lu was lonely and desperate, still getting over her David Schwimmer-lookalike ex. And, even now, with a ring on her finger, the happiness oozing out of every pore, there is this nagging desperation about her. Her happiness borders on the manic and crazed, like a sleep-deprived person faking energy with a shot of espresso. She is too giddy, too dismissive of the other women’s concerns about Tom’s reputation. Her whole relationship is a minefield of red flags. It’s why I still maintain that they won’t actually make it to the altar.

Anyway, back to the ladies on the yacht. Sonja, Ramona and Carole gathered in one of the rooms to get ready for the engagement party. And this time, it was Ramona’s turn to stir the pot, asking Sonja how she was going to deal with seeing Tom, since the last time she saw him, it was in bed. And then Sonja began to get nervous. Because then Ramona drops a bombshell (since Bethenny won’t, at least not this episode): Luann knew about Sonja hooking up with Tom when she decided to pursue him.

Which sucks because stupid Bravo put a stupid, “To Be Continued” banner at the bottom of the screen, indicating that the intrigue is just getting started. God, I hate those. Stop dragging out the drama; it’s annoying. Now, we have to wait a whole week to see Tom be a dismissive jerk to his former flames, to see Lu get into a screaming match with Ramona, and to find out what information Bethenny found out about Lu’s relationship with Tom. This is gonna be good. 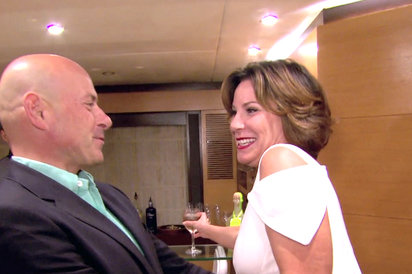