Alan Vega, who passed away July 16 at age 78, was deeply in touch with the darkness at the heart of our most euphoric music.

Alan Vega was not a rock star, he was the shadow behind every rock star, a brutal, bone-cutting burlesque of the rock star’s desire, the entire animal reduced to stuttering incoherence and a few words about lust, love and violence.

The man born Boruch Alan Bermowitz refused to be blinded by the happy light of the frontman’s sexdream; his cold, caged stare, prisoner flails, and bubbling, hissing, pleading voice, were kindling for the eternal flame he guarded of rock’s dark roots, its stories of despair, even as he fronted one of the more progressive and adventurous bands of our time.

Alan Vega wasn’t just one of our greatest rock singers; a century of rock and its brutal and beautiful antecedents lived inside of him.

Alan Vega’s rock ’n’ roll was not a route to Pink Cadillacs; it was a path to survival.

Alan Vega was Jim Morrison caught with a bloody knife in one hand, Elvis’ Sun Sessions in the other, and no alibi. Vega cut to the core of the American nightmare at the heart of rock ’n’ roll: the best of our music exists because something went very, very wrong, wrong with our history and our hearts. We are a damaged culture, we are damaged souls, so this is our sound.

“Frankie Teardrop,” one of the greatest American songs of all time, functions like that: it is the story of the natural fantasy at the end of joblessness, the last nightmare when the dream is gone.

There is a lonely, hungry sound made by the greatest American artists; it reflects both the lightless tenement and the dry dirt-patch in an Appalachian hollow; it sings of the sorrows to be found both in loveless Parchman prison and on the street of an ashy city where puddles reflect Terminal Bar neons.

Our greatest singers, singers who predate rock ’n’ roll and transcend genre, manifest this: Sid Hemphill, Fred Neil, Amede Ardoin, these are saints stalked by hunger, fear, and death, and their melodies remain as old as the heart and as fresh as the landlord’s frown.

If all of punk rock had been as shocking, as beautiful, as advanced, as naked as Alan Vega’s work with Suicide, it could have lived up to its promise.

Alan Vega was one-half of the churning, whirring, maxim-minimalist future/past frightwig godband known as Suicide. Suicide’s music was shimmering, vibrating, anxious, the noise of angels being eaten by the machine age.

In its manic, circular hum and tic, it was the sound of crazies sleeping on the subway and lonely, spit-dripping men in uptown SROs; it was the sound of aging men and women living in the 20th century but still sleeping in old slave shacks on South Carolina farms, it was even the sound of West German children trying to rebuild the future with electronic music. Behind the keyboards, Martin Rev conjured the sound of death at Christmastime, his machines spitting out TB coughs in the delivery room at the birth of the computer age.

This vastly original noisescape was complimented by Vega’s extraordinary, angry, deeply terrified posture. He sang as if he was caught between the hum of beautiful love and the self-hate of angry lust. He sang of American dreamers drowning in death, debt and the pursuit of the dreams that drove them to both. He sang like a man unable to distinguish between death and love, between relief and eternity.

The sound of Suicide married the junkie red and gray of “Sister Ray” and the hiccupping velvet tremble of the purest rockahillbilly via means so modern that they virtually defy classification.

In the last 45 years, it’s possible that only the Ramones and Neu! were so shatteringly original yet so vastly compelling. Suicide made music that was beyond blues, beneath the blues, yet I would not say it was beyond rock ’n’ roll; in fact, it was the most severe and affecting gut-scoops from the world of Sam Phillips and Alan Lomax, only Suicide evoked this spirit with an incredibly original, hot-wired modernism that escapes any reference (other than to say it alluded to the speed-freak raga hum of Terry Riley, the rudeness of grave rockabilly, and beat hysteria of Joe Meek).

Vega matched this sound with one of the greatest live performance personas in our history.

He was confrontational and disturbing in a way Iggy, Johnny Rotten, or Nick Cave never could be, because Vega knew that to tell the American story, he had to stand unprotected, he had to not just receive the abuse but pre-empt it with self abuse; there was no greater way to announce that rock music was so much more than the alcohol-fed soundtrack to a Sweet 16.

Vega channeled the feral acrobatics of rock ’n’ roll’s most frantic frontmen—doomed and sinewy geniuses like Gene Vincent and Vince Taylor—into clawing, psychotronic shadowboxing that laid bare all the paranoia and anger at the roots of the rock ’n’ roll star’s psychodrama.

If all of punk rock had been as shocking, as beautiful, as advanced, as naked as Suicide, it could have lived up to its promise, and not just been a fashionable revamping of the Troggs.

Suicide provided an idealistic, and deeply over optimistic picture of what punk rock would become. Their new music was truly new, it was an entirely new vocabulary to sing about America’s old stories of death, deprivation lust and fear (and macho collapsing in the face of it all).

Instead, punk rock, with very, very few exceptions, just became a childish revisit to Ronson dreams and downsized-Roxy glamor, when it should have been this, the revolting, hypnotic, bluesbilly electric eel of Suicide. 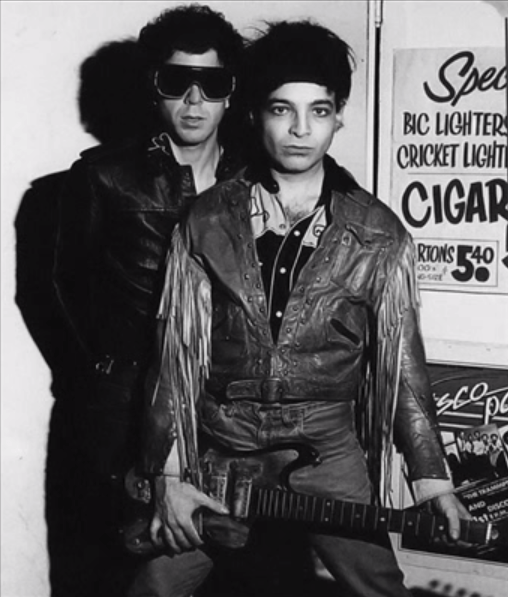