That slogan was hard to escape this week as the 2016 Republican National Convention invaded Cleveland. In the area directly around the Quicken Loans Arena—the Q—passersby could see those words emblazoned on hats, shirts and buttons. Inside the arena, it was broadcast on jumbotrons, shouted by speakers and written in bold on signs held aloft by delegates and crowd members.

On Tuesday, a roll call vote made Donald Trump the Republican Party’s official nominee. It also elevated “Make America Great Again” to a rallying cry for Republicans who, up until Tuesday, may have been holding out hope that they could somehow escape Cleveland with a nominee other than Trump. As recently as Monday, “Never Trump” supporters tried to force a vote on whether RNC rules could be amended to free delegates and allow them to vote for a candidate other than the one they were pledged to. By Tuesday, that movement was dead and “Never Trump” factions became reluctant Trump supporters.

If there was one theme of the convention, it was not that Donald Trump would be the savior for the Republican Party. It was not that the Republican Party platform was a perfect set of ideals for a Republican president to pursue. It wasn’t even about Trump being the best person for the nomination. Instead, delegates focused on the fact that, like it or not, Trump was their party’s nominee and he was in their opinion a better alternative to electing Democrat Hillary Clinton into office. The party, in the end, did not unite behind Trump. They united against Clinton.

One thread that ran through the convention was a visceral dislike at any mention of the former Secretary of State. When New Jersey Governor Chris Christie took the stage on Tuesday, he used the RNC as a platform to eviscerate Clinton to a crowd that already proudly wore shirts saying “Hillary for Prison 2016.” On Thursday, the final day of the convention, stickers popped up on the lapels of almost every delegate on the convention’s floor: “Defeat Hillary. Vote Trump.”

When Texas Senator Ted Cruz gave his remarks on Wednesday, the second place primary finisher refused to endorse Trump, a man that had called him a liar on the campaign trail and insulted the appearance of his wife, Heidi Cruz. Instead, Cruz asked the audience to “vote their conscious.” He was met with deafening boos from the crowd. Cruz, with his failure to endorse Trump, was seen as a newly minted divisive character in a party whose current unity is tenuous at best. His lack of change of heart left the GOP audience wondering how a Republican as prominent as Cruz could dare to threaten the delicate unity that had emerged in Cleveland. With Trump considered the anti-Clinton, Cruz’s perceived dismissal of him was met with ill will from the thousands in the arena and millions more watching at home.

Even with all the drama and uncertainty, the mood inside of the Q was, at times, jubilant. Loud rock music pumped through the sound system channeling Cleveland’s place as the home of the Rock and Roll Hall of Fame. Delegates and crowd members danced and sang. They wore clothes that lit up. They proudly shrouded themselves with American flags. Regardless of how they came into the convention (a Trump supporter or not) it was obvious that every delegate, alternate delegate and guest was happy to be there. They were happy to be a part of the process to choose their party nominee, despite the ongoing criticisms from the media that called the convention a “mess” or likened it to a circus.

While the inside of the arena was euphoric, the areas adjacent to the Q stood in stark contrast.

Outside, protestors and police swarmed the streets. They were often corralled behind imposing metal fences that separated protestors from convention-goers. A quick walk from the convention center could lead to raucous arguments, chants calling for the end of Trump’s candidacy and police on megaphones directing protestors about where to go. The convention ended with at least 18 arrests and two officers with minor injuries.

When the balloons fell inside the arena on Thursday night after Trump accepted his party’s nomination, the chance those protestors had to have their voices heard was lost. Trump and the convention that had coalesced behind him would rapidly dissipate. The rapidly gentrifying Rust Belt city on the banks of Lake Erie would, once again, return to normalcy. In short, everyone would go home and Trump would start the new leg of his campaign trail, this time as the official GOP nominee.

Next week, the Democratic National Convention will be held in Philadelphia, Pennsylvania. There, Clinton will earn her party’s nomination. Soon, she and Trump will stand together on a debate stage.

With the RNC at a close and the DNC imminent, the next stage of the campaign is upon us: the general election. Now, Trump has to court voters outside of the Republican Party and convince them that he can, in fact, “Make America Great Again.” 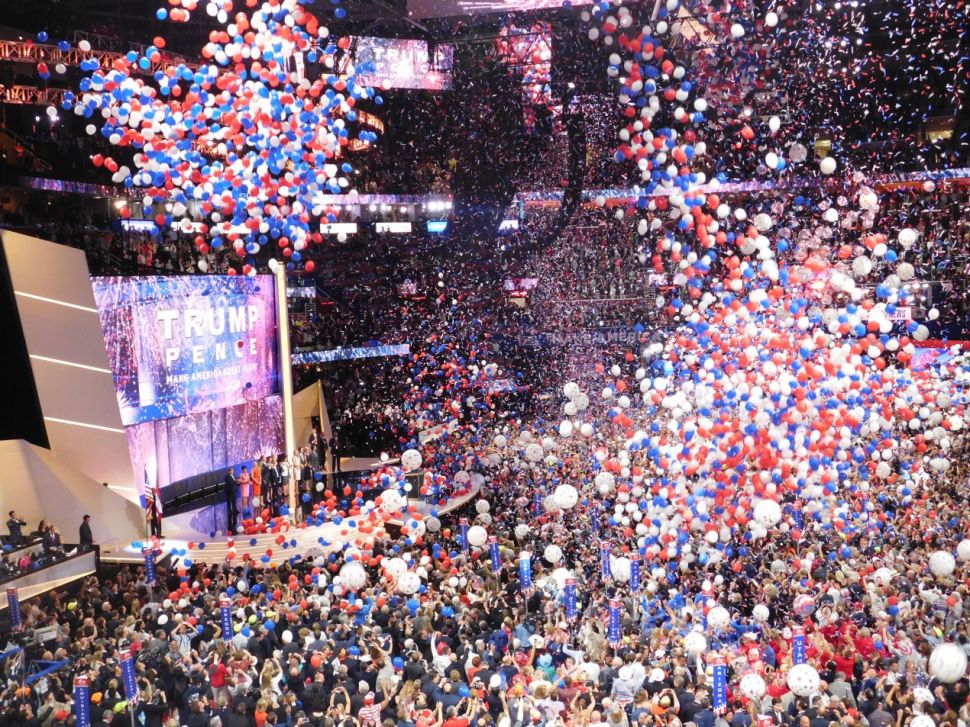