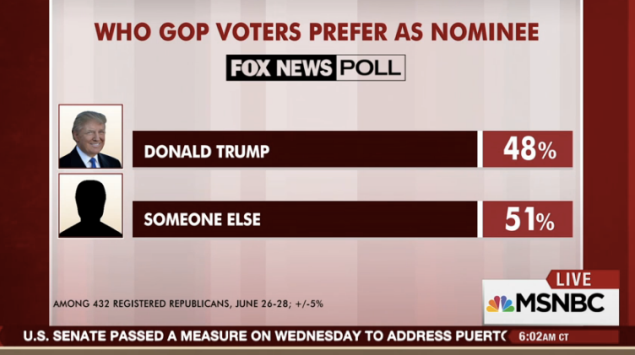 If you catch “Morning Joe” in one of its better moments, you hear some pretty good conversation.

One of these times came Thursday morning on MSNBC after the screen showed presidential candidate Donald Trump ranting about how he can’t get endorsements from fellow Republicans like former Florida governor Jeb Bush and Ohio governor John Kasich, who lost to Trump in the primaries.

“They broke their word!” Trump said of “pledges” signed months ago. “In my opinion, they should never be allowed to run for public office again because what they did is disgraceful!”

Back at mission control, with a frown on his face, alpha co-host Joe Scarborough said it not once but twice.

“It doesn’t appear so,” Geist said. “Every time he takes a step forward, he take a couple of steps backward.”

If you want to win the state of Ohio, Geist said, it makes little sense to go after Kasich, who is very popular there. Trump can’t help it, Geist said. It’s just his personality.

“It’s score-settling, it’s vendettas, it’s people who have slighted him and wronged him,” Geist said. “He carries a chip on his shoulder.”

While Geist spoke, part of the screen showed Trump’s speech but with the sound down low. You could still hear the edge of his harangue in his voice, which comes out in a series of shouts between deep breaths.

Mike Barnicle picked up the chat.

The screen showed a bit of a Trump speech then a bit of his interview on the previous night with Bill O’Reilly on The O’Reilly Factor on Fox News Channel.

“When Isis began—Hillary in charge (as secretary of state)—it could’ve been wiped out quickly and effectively,” Trump said. “And if she gets in (as president), it’ll be massive and we won’t even have a country anymore. We’re going to be afraid to walk outside.”

Trump refused to let O’Reilly break for commercial until he checked a last item off his list.

“And one other thing,” Trump said. “They’re letting tens of thousands of people come in from Syria and nobody knows who these people are.”

O’REILLY: “All right, well, we went through that already.”

TRUMP: “—and a lot of these people are ISIS.”

Back on the set, Barnicle looked steamed.

“You cannot run on fear and win,” he said.

“I thought that’s what we did in America,” Scarborough said.

“No, he can’t do it,” Barnicle said twice. “What is going to happen to his language and to his behavior once he begins getting intelligence briefings because he is so far off the rails on this.”

Scarborough countered that many people, including himself, voted their fears in 2004 by reelecting George Bush despite his ghastly mistake in invading Iraq.

Barnicle urged examination of Trump’s words about thousands coming in from Syria and how they might be ISIS. This is not true, Barnicle said.

Even if what Trump says is not true and demagogic, Scarborough argued, it could be good campaign rhetoric if he’d stick to the script.

“There are people out there hearing Donald Trump talk about ISIS who are going to say ‘Hey, he’s going to protect us more than Hillary Clinton,’” Scarborough said.

“Donald Trump goes around saying we’re doing virtually nothing to battle ISIS to conduct operations against ISIS,” Barnicle said. “It’s just not true. At some point, he’s going to be asked, ‘Donald, what would you do?’”

When she got a brief moment to sum up, she did it well.

SAY WHAT? On The Last Word on MSNBC Wednesday night, Lawrence O’Donnell played not once but twice this clip of Trump speaking to a rally in Maine.

On the set, O’Donnell spoke as if fighting back a grin.

‘This was more than hello. He boarded her plane and talked for 30 minutes.’

“He gets up there and talks like that on a stage with Hillary Clinton, he’d be lucky to get 26 percent of the vote,” Dean said.

THE BILL CLINTON/LORETTA LYNCH PROBLEM Not just Fox found fault with former President Bill Clinton and attorney general Loretta Lynch for their 30-minute conversation on a private airplane in Phoenix early this week.

Clinton’s wife is being investigated by the FBI, which Lynch oversees, for using a private server in her home for classified mail while Secretary of State.

On CNN, Jeff Zeleny and Jeffrey Toobin discussed it in critical tones.

“The optics are horrible,” Zeleny said. “She ends up admitting to it the next day . . . It certainly looks bad.”

Toobin called it “inexplicably poor judgment on the part of both of them . . . Should have known this would look terrible .  .  . Opens the door to raise all sorts of questions. They never should have done it. It was just an unforced error on both their parts. It was so unnecessary and so obviously wrong.

“It’s hard to believe that no one in either traveling group said ‘Hey, you know, shake hands if you want but leave it at that.’”

Zeleny answered with “This was more than hello. He boarded her plane and talked for 30 minutes. Whenever the decision finally is made on what will happen with this investigation, this is going to be viewed by both sides as something that could’ve influenced it.”

FOX YOU TOO More than most people on the news channels, Fox News actors and actresses tend to pound their chests and demand vicious vengeance against terrorists.

“Fight fire with fire!” Trump said this week, although you actually fight fire with because using even more fire means an even bigger fire.

But Trump would save his for waterboarding, which is torture and a war crime but nevertheless had been heard again in his recent speeches.

Fox tough guys like Sean Hannity love to pump up Trump with this kind of talk. So it was curious that Fox in prime time for the last two nights failed to show exciting video of American and Iraqi forces pounding death bombs upon two convoys of ISIS vehicles as they tried to escape Falluja in Iraq.

When President George W. Bush invaded Iraq in 2003, Fox reveled in such stuff. Those Hellfire missiles! Those explosions! Imagine the bad guys being blown to bits! The Iraqis said up to 250 ISIS fighters might’ve died in this week’s desert storm.

But if you watched Fox in prime time Wednesday and Thursday, you would not have seen any of this footage on The O’Reilly Factor, The Kelly File or Hannity.

Oh, but you would have seen the Benghazi fire of four years ago that burns like Fox’s Yule log almost daily.

And you would not have seen the American forces, under their Commander-in-Chief, Barack Obama, alongside their allies, blasting apart a nefarious nest of—yes, let’s say it—“radical Islamic jihadist militant terrorists.”

And you would never get a sense from Fox that ISIS forces are losing territory in Syria and Iraq and that is one of the main reasons why their minions are lashing out in cities across the world.

Instead, Fox viewers get simplistic rants from stars like Eric Bolling, a guest on “Outnumbered” on Wednesday.

“Why isn’t his head exploding?” Bolling asked of the President.

We must assume Bolling was using gruesome exaggeration for effect. The last time a President’s head exploded was frame number 313 of the Zapruder film and it wasn’t a good thing.

Perhaps Bolling will study the film from this week of all those exploding ISIS vehicles and get his jollies and then go soak his head. 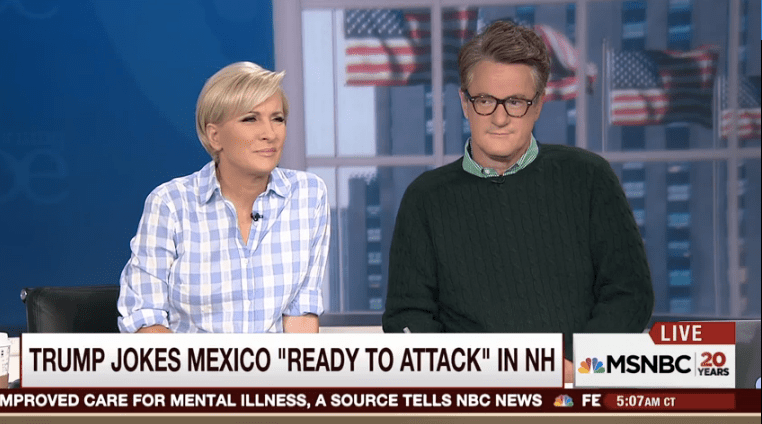