Let me be entirely honest: while I don’t wear any makeup or go to the circus, the predicament of the clown isn’t so foreign to me. When my family hit the height of its dysfunction, I became the class clown, taking whatever half-hearted laughs I could get. I’m not exactly bipolar, but often bounce from happy to sad within minutes. After an evening spent entertaining a group of strangers, I might go home and cry in my pillows. Not surprisingly, when I had to buy a car, a little red smart car seemed like the only right choice. It has happened that I crammed my husband, two cats and two rabbits into my tiny car, only to be the target of soda cans hurled by teenagers. So when I saw that an astonishing selection of 60 clown paintings was up for auction on eBay, I quickly contacted the seller in the hopes of meeting a kindred soul.

There are clown portraits of all sizes and styles, but no truly happy clowns. The clowns are all male save two females and two who appear to be gender-fluid.

When Yasmin Menon and Pablo van Dijk opened the door to their Gramercy Park apartment I was greeted by a three-month-old black poodle named “Poodle.” The colorful couple both wore hats and were quick to offer wine and personal compliments. The largest wall of their apartment is entirely covered in clown paintings. “Hey, you! I’m talking to YOU!” The clowns all seem to say. As their involuntary audience you can’t help but get a little self-conscious.

There are clown portraits of all sizes and styles, but no truly happy clowns. The clowns are all male save two females and two who appear to be gender-fluid. Van Dijk and Menon’s clowns don’t carry balloon animals, slip on banana peels, juggle giant fried eggs or ride monocycles. They are captured after their punchline failed. The show was over.

The clown collection began about ten years ago, shortly after van Dijk met his sixth wife, Yasmin Menon, a department manager at the translation company Geneva Worldwide. “It started with one piece, and we thought ‘this is fun, let’s get a couple more’,” says van Dijk, a professional art and art book dealer and the proprietor of Kunst Editions New York. He downplayed the impressive collection as a mere ironic gesture. “It begun as a joke that got out of hand,” van Dijk, who has dealt with “real” art for the past 45 years, says in his velvety Dutch accent. Van Dijk has always liked collecting things—coins, radios, stamps, hats—but whenever he came close to completion he lost interest.

“It was like a treasure hunt. The whole journey was the thing,” Menon, who hails from India, explains. Together the couple has travelled the world, always on the lookout for the next clown addition. “Anywhere you go you get the one painting you can find, and it has a story associated with it. There was a lot of haggling. Then you have to find packing material and go to the post office. Singapore, China, Indonesia…” The portrait of the clown is ubiquitous, even in countries where it’s not indigenous. Asian clowns feature the same white, greasy makeup, stylized eyebrows and lips, the same knobby red nose. The clown knows no race. He is here to unite, not divide us. Van Dijk remembers trading one of his clown paintings—not a real painting actually, as it was carved out of wood—for a tailored suit. “I said, ‘I want to trade a clown painting for the suit. My tailor says: ‘It’s great for my hotel in Bangkok.’ ”

While we sit and talk, my wine glass keeps filling back up mysteriously. An age-old magic trick, it always remains half-full (or half-empty, if you think and feel like a clown).

While serial killer John Wayne Gacy began painting clowns on death row, the subject has captivated serious painters and collectors for decades, if not centuries. Max Beckmann, Marc Chagall, Francis Picabia, Edward Hopper and Pablo Picasso all painted clowns. (Pablo van Dijk was named after the latter, a family friend whom his art dealer parents met while pregnant with him.) Cindy Sherman photographed herself disguised as a clown, and Bruce Nauman’s video “Clown Torture” featured the artist as, well, a tortured clown.

Diane Keaton published a book of her collection of clown paintings, accompanied by essays by fellow stars like Woody Allen, Larry David, Ellen Degeneres, Danny Devito, and Garry Shandling. “No matter how many times life hits them square in the jaw, they bounce back,” Keaton writes in what is possibly the best example of the difference between clown and “normal” human ever written. “I feel for the plight of the clown to find an audience, any audience … we have all gone out for the laugh, sold out on occasion, dressed for effect, and paraded our hearts on our sleeves. All of us have begged for attention and cried out for loneliness. Each and everyone of us has been surprised and hurt, over, and over, and over, again and again, just like the exhausting, repeated shock that is the life of a Clown.”

“I tell real art people that it’s an installation by Guillaume Bijl,” says van Dijk, referring to the Belgian artist who recreates real life scenarios, such as mattress stores and wax-doll museums, in gallery spaces. “Of course, it’s a complete lie just to justify this nonsense collection.”

Of the 120 paintings van Dijk and Menon bought, some were from eBay, others from thrift stores and the Chelsea Flea Market; they cost the couple between $50 and $1,500 each. Several are from the 1930s and appear to be by famous clown painters (yes, there is such a thing), like William Moninet (1937-1999), a Louisiana painter whose clowns have sold in auctions for upwards of $1,000. But others were done by Sunday painters. “There are a lot of very rare ones,” says van Dijk, “and some bad ones, too.” The couple started to narrow down their collection long before they decided to put the remaining 60 pieces up for auction. Some of the clowns went to friends, others they put on the walls of their building’s laundry room. “Some got stolen from there, which I think is funny,” van Dijk says. The first auction—last week—didn’t take, so they’ve just relisted the paintings.

Collecting clown paintings can’t possibly be about money. As the collector Robert Berman writes in Keaton’s book, “Generally, you can buy a very bad clown painting for the same amount of money you can buy, to my mind, a very good one. This is not always the case in the rest of the art world…The premise of clown paintings is that they are ‘bad art,’ found in places where people recycle or throw away unwanted things.”

One time, when Menon returned from a trip to India, she was surprised that van Dijk didn’t come downstairs to greet her and carry her luggage. “I walk in here and he didn’t want to scare me. He thought I’d scream. He peeked around the corner wearing an orange wig, those funny big shoes and a big nose, his face all painted up. He was dressed as a clown!” Strangely, he also had two remote controls hanging from his neck.

“For 20 minutes I was dressed as a clown,” van Dijk adds. “Then she goes, ‘This is too fucked up, take it off.’ I had 400 helium balloons here because I missed her so much. The whole ceiling was covered.” Van Dyke had spent days measuring every single clown painting, carefully figuring out the spacing to create a perfect mosaic.

Not everyone understands the couple’s sense of humor or appreciates the depth and irony of their unusual collection. A lady friend insists on sitting with her back to the paintings on visits because she suffers from “coulrophobia,” the fear of clowns. “I tell real art people that it’s an installation by Guillaume Bijl,” says van Dijk, referring to the Belgian artist who recreates real life scenarios, such as mattress stores and wax-doll museums, in gallery spaces. “I tell them, it’s one piece, you can buy the whole thing. But nobody is interested, so it’s safe to say that. Of course, it’s a complete lie just to justify this nonsense collection. If anybody would be interested, I would reveal the truth.”

To van Dijk it doesn’t seem to matter how much money he gets for his collection. He just wants to find a home for it. “I told Lisa Levy,” a friend and conceptual painter who incorporates writing, “you can have all of these, put your text on them and then sell them as a show. But she said, ‘I don’t have time for that, it’s too complicated.’” Van Dijk shrugs. (Almost) everybody loves a clown, but few dare to admit it.

I should have checked my bags before leaving van Dijk and Menon because when I got home I discovered a tiny painting of a child clown, his sad eyes virtually saying “you wouldn’t return me just because of an ethical conflict, would you?” You can run but you can’t hide. The clowns will always get you. 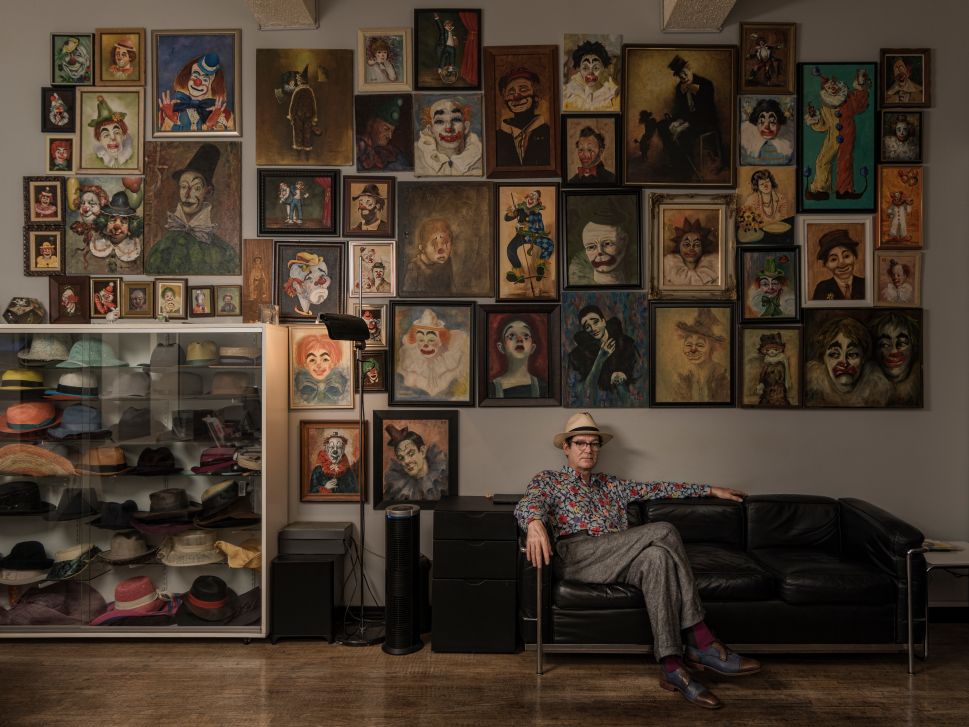