Edward Snowden appeared tonight in Chelsea as a disembodied video head on top of a robot display system on wheels. He appeared there in conversation with author and technologist Jaron Lanier, who showed up on the same strange rig, the BeamPro. As soon as Lanier’s came online and he got a look at Snowden’s in front of the crowd, he started laughing, saying we lived in absurd times.

“There is an absurdity to the times,” Snowden agreed, “and there is also an underlying severity to them.”

Snowden accepted the inaugural Thoreau Public Service and Disobedience Award (a ball-peen hammer painted red), and he came ready to talk about Henry David Thoreau. He opened with a quote from the writer which argued that moral service to the state doesn’t necessarily mean obeying all its laws. “By contravening the law, we illustrate that society will not be ended,” Snowden told the invite-only crowd of roughly 50 people.

Most of Snowden’s criticisms were directed at the NSA. He painted it as a good organization that has gone much too far. “There are good people doing bad things for what they believe are the right reasons,” he argued.

Lanier broadened his interlocutor’s points about surveillance by the NSA to all the big companies providing technology today. “We have a remarkably nice set of new overlords in Silicon Valley,” he said, calling them some of the most well meaning and well educated masters the human race has ever seen, but he went on, “It really doesn’t matter,” because people with power naturally work to hold onto it while constructing a narrative in which everyone remains better off if they remain in control.

Both Snowden and Lanier took different approaches to criticizing the government and technology companies for undermining the privacy of Americans. Lanier said Americans were giving privacy up for free digital candy. Privacy is not about having something to hide, Snowden said, “privacy is about having something to protect.” He contended, “Privacy is the fountainhead of all other rights.”

Here are some resources for making it more difficult for the state or internet service providers to track people:

The weirdest part about watching Lanier and Snowden talk through the BeamPros was that the screens are mounted on wheeled bases and they can actually move in space. The robots kept turning to get a look at each other or at different people in the room. At the beginning of the talk, they each turned inward to greet each other as the conversation opened, like something out of the original Star Trek TV show.

Naturally, the video feeds had glitches, which inspired inevitable jokes about the NSA tampering with them. Snowden didn’t make any jokes, but he did close the evening with a thought about the need for transparency around the rules that govern the world’s largest intelligence agency.

“Where are the boundaries of our rights?” Snowden asked. “If they are being abridged without our knowledge, that may be many things but I’d argue that it’s not American.” 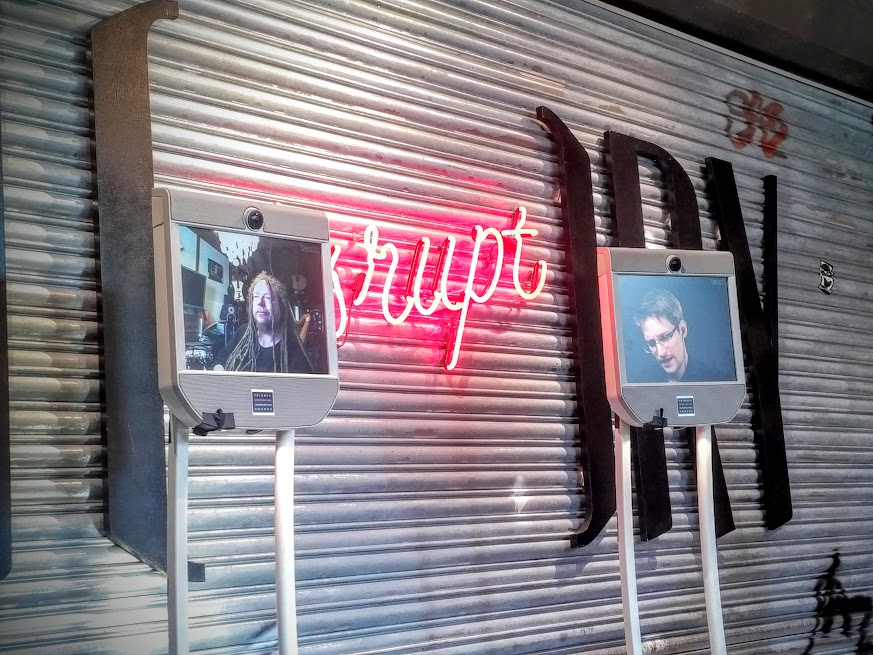