TV shows like Billions make Wall Street look like a mecca for moneymakers, but the reality is much more complicated, especially for women —less than 50 percent of women in financial services progress from midlevel to senior positions, and married women with at least one child earn only 76 cents to the married father’s dollar.

Actresses Alysia Reiner and Sarah Megan Thomas have never worked on Wall Street, but after learning of these universal hardships they were determined to get the stories of the women who did onto the big screen.

“I love Wall Street movies, but they don’t speak to my heart,” Reiner told the Observer. “The inequity across the board for women in this world spoke to me in a massive way.”

The duo combatted this inequity with the film Equity, opening this Friday. The movie centers on investment banker Naomi Bishop (Anna Gunn of Breaking Bad), who has successfully taken nine companies public over the last five years. Her most recent initial public offering was a bust, however, leaving investors wary. She tries to revive her career by handling the IPO for Cachet, a (fictional) private social network which boasts about offering strong encryption. But Naomi’s dreams of Wall Street profit collide with the realities of Internet security when she gets a tip that Cachet’s network is not as secure as it seems.

Besides developing the story, Reiner and Thomas co-starred in the film and produced it—but they also got funding directly from Wall Street itself. Thomas wrote a pitch letter to a male financial services bigwig she read about in the New York Times business section—he met with her within two weeks and introduced her to female investors.

“I pitched a movie where Wall Street wasn’t a villain, and he opened the gate for women on Wall Street to talk to us,” Thomas said.

One of those women was Linnea Roberts, a partner, co-head of technology and advisory director at Goldman Sachs who also managed diversity in the firm’s banking division.

“I was pretty blown away by their professionalism and all the homework they did around the story, which was depicted in a very realistic way,” Roberts told the Observer. “It’s been a phenomenal experience.”

Another sponsor was Bloomberg LP, which also helped make the film’s graphics and visual effects realistic—the company even lent Bloomberg terminals to the crew.

“They put their money where their mouth is, and were our Greek chorus,” Reiner said.

The film’s focus on a tech IPO gave it added resonance, according to the filmmakers, because Facebook’s failed 2012 IPO is still a sore subject for the stock market.

“With tech and social media, there’s no there there,” Reiner said. “We value these companies at millions or billions of dollars, but it’s not tangible at all. It’s very ephemeral.”

“Rumors in the tech world can make a stock go up or down,” Thomas added. “We were primed to put this story out there.”

Roberts, who’s worked in the tech sector for 26 years at Goldman and other firms, said the film brought across how frustrating it can be to work with founders who are convinced their company will be the next unicorn.

The women of Equity also have to deal with personal issues that affect their professional life—they, like real life Wall Street bankers, are forbidden from “talking across the wall,” or discussing business outside the office. Several of the characters break that rule, in ways Roberts admitted were a bit unrealistic.

“Bad actors always bust through, but the most likely scenario is that someone who doesn’t know what you do will ask you for tips,” she said.

One aspect of the film that did hit close to home for the actors and their investors was that women who get pregnant while working on Wall Street are both thrilled and fearful. Erin, a vice president at Naomi’s firm played by Thomas, is expecting a child, but she can’t stop checking her Blackberry during her ultrasound. The filmmakers said her story was inspired by real Wall Street women.

“They felt they had to hide their pregnancy to get a promotion before bonus time,” Thomas said. “Ambitious women want to be powerful, but also start a family.”

Roberts said she had felt this mix of joy and panic herself when she was pregnant 20 years ago, although she had a supportive mentor rather than a queen bee like Naomi.

“The first time anyone in this business or any male dominated business gets pregnant, it’s a real point of uncertainty,” she said. “It was an unwritten rule to wait until you were a managing director to have a baby.”

But Roberts added that this attitude has softened over time.

“Women internalize this and think it’s a bigger problem than it actually is—they’re a lot harder on themselves,” she said. “Everyone’s gotten the memo that women are supposed to be doing this, and there’s a lot of room for women to succeed.”

Roberts thinks Equity can help to level the playing field, and that audiences of both sexes will be able to apply the issues in the film to their own work.

“I hope a lot of men watch it, and get a different lens to see the world through,” she said. “You really have to own the problem.” 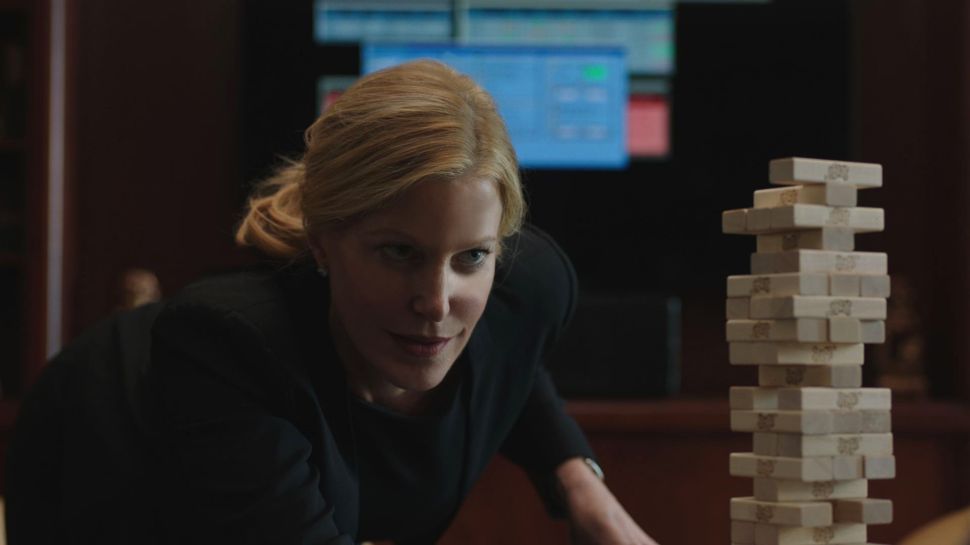