Speaking at the “Unity in the Community Walk” in Brooklyn this evening, the comptroller, who is widely seen as a possible challenger to the mayor in the 2017 Democratic primary, said it is better for the city “when the mayor and the commissioner are on the same page” and speak with one voice—but said that they are “getting there.”

“I think they have some disagreements,” Stringer said, though he would not elaborate further.

He praised the Black Lives Matter movement, which he compared to the antiwar movement and the civil rights movement.

“The movement really is about our young people expressing themselves and the legitimate fear they have in this country,” Stringer continued.

This comes after the deaths of Alton Sterling in Louisiana and Philando Castile in Minnesota at the hands of the police and the shooting of 11 police officers, five fatally, at a demonstration in Dallas by a man who said he was inspired by Black Lives Matter.

The differences between the mayor and the commissioner were on display at a news conference yesterday morning where the mayor accused former Mayor Rudy Giuliani of creating more division among people when he called the Black Lives Matter movement “inherently racist” and said that black people tend to die at the hands of other black people more than at the hands of the police.

The commissioner evaded commenting on the matter, saying he would not speak on Giuliani’s behalf as he and the mayor had the opportunity to elaborate on their thoughts. Bratton has frequently been critical of the protesters, saying the movement has been focused on negatively portraying police and has accomplished littler. De Blasio, however, has praised the movement as a force for good. Despite those differences, both men have insisted they’re on the same page.

The march this evening, organized by Sen. Jesse Hamilton, started at the 77th Precinct and concluded at Lincoln Terrace Park, drawing more than 200 people.

Before the march kicked off, individuals stood up against the brick wall of the precinct building holding posters with slogans such as “Enough is Enough,” “#BrooklynUnites,” “One Love,” “I Am Philando Castile,” “Spread Love, It’s the Brooklyn Way” and “Increase the Peace” as Marvin Gaye’s “Mercy Mercy Me” and Harold Melvin & The Blue Notes’ “Wake Up Everybody” blared in the background.

A number of elected officials were in attendance—among them, Public Advocate Letitia James, Councilman Robert Cornegy, Assemblyman Walter Mosley, Assemblywoman Jo Anne Simon and Assemblywoman Diana Richardson, calling for unity, condemning the deaths of Sterling, Castile and the Dallas police officers and calling for action and legislation to address the issue.

Speaking with his 13-year-old son at his side, Hamilton, a founding member of the United Against Gun Violence Task Force, called for common humanity in light of the recent deaths, noting that longer-term changes need to be considered and that positive police-community relations are needed.

“We have faith-based leaders here, we’ve got the churches,” he said. “The rabbi’s here, we have the patroller here…to say enough is enough,” he said. 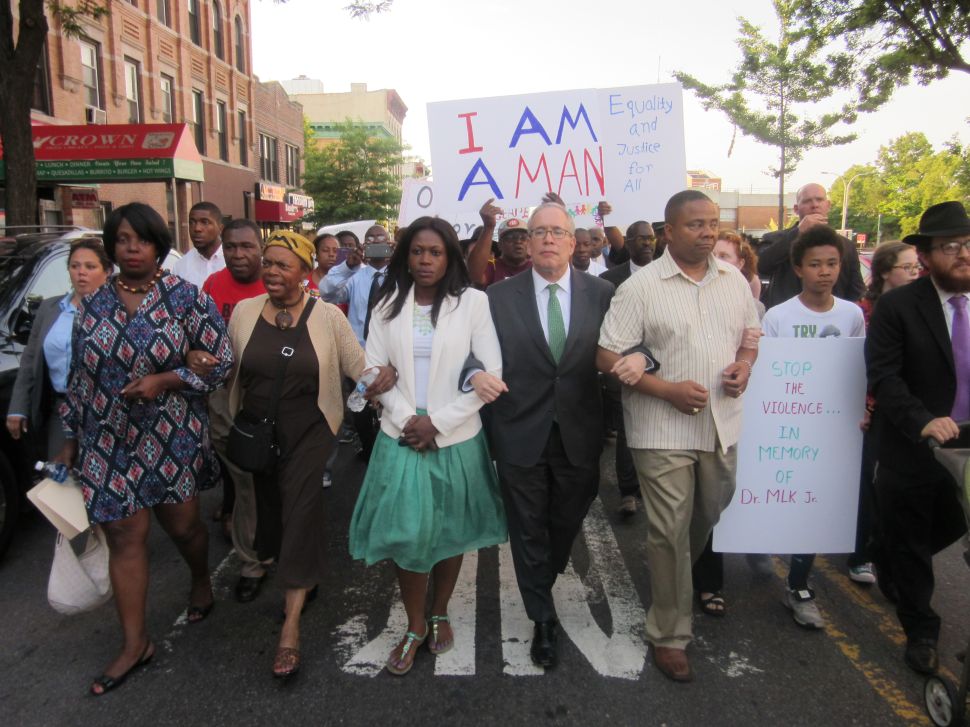