You may have turned 45 twenty years ago, or perhaps you will get there twenty years from now. You may have had—or may well have in the future— a secure job, a piece of property paid for, money in the bank. But if you turned 45 a few days ago, as I did, it is unlikely that you have any of those things, and certainly not all three. Middle age (because now we are all certain to live to 90) is simply not what it used to be. Modern half-life has all the precariousness of life in your twenties, but with seventy-five percent less possibility.

Or at least those are the thoughts in my head as I stare out a wall of inch-and-a-quarter thick tempered glass windows some 1000 feet above Los Angeles. The location is OUE Skyspace LA, an observation deck spreading across the 69th and 70th floors of the U.S. Bank Tower, the tallest building west of the Mississippi, and one that has served as the stacking spindle around which the city has spun since it was completed 27 years ago. The space is a calculated attempt to add luster and attention to the skyscraper by Overseas Union Enterprise LTD, its owner since 2013. (The Singapore real estate investment firm purchased the I.M. Pei-designed tower at the discounted price of $367.5 million because it was only 60 percent leased at the time.) Think of Skyspace as the latest cherry floating high atop Downtown L.A.’s forever evolving and endlessly hyped revitalization.

But while Skyspace may top every office manager’s list as the most photogenic option for this year’s holiday party (book now!), that’s not the reason people are talking about it—or for that matter, why it has me questioning my mortality and place in the world. Connecting the two floors at a 29-degree angle, is a 45-foot slide made of the same tempered glass as the windows. After a lengthy wait in line, one can tuck oneself into a sort of rubberized blanket and shoot fast down the largely frictionless slide, landing on blue and red mats of the sort one finds in a toddlers’ gym.

The Skyslide is an engineering and technical marvel, one that uses glass and extreme height to precisely calibrate a response that can best be described as a gentle, joyful existential crisis. Mercifully, it is one that is over pretty damn quick. It is an experience that can be yours for a $33 admission fee–$8 more than if just wanted to check out the observation deck. All told, it will set you back the same as if you ordered a full-sized Trust Me (the recommended sushi platter) at Sugarfish down the street.

“There is a total defiance of common sense about the whole thing,” said Michael Ludvik, a chief structural engineer on the project. “There is a whole dramatic tension between what you expect from glass and, rationally, what we know as engineers about glass. We know from science that this glass is crazily strong. The floor is literally as strong as steel. It has multiple layers of redundancy. The building will fall down before the slide does. But it doesn’t feel like that when you are on it. It feels like, ‘Oh my God, I am going to die.'”

Adds Ludvik, who runs his own Brooklyn-based engineering firm, “People really get a kick out of the delta between expectation and scientific reality.”

Kick is one word for it. The first time down the slide is genuinely terrifying: after landing, my body shook at the same rate that my Maltese mix’s did on the Fourth of July. By the second trip down, I was fine, and able to focus more on the ever-spreading city in front of me, rather than on my interior angst.

The view is a stunning—it has basically received better reviews than the slide itself—though perhaps not in the way they promise. OUE Skyspace advertises that on a clear day you can see to Catalina. The fact is that on this day, and I am guessing most every other, the city just kind of dissolves into the horizon a dozen or so miles from where you are sliding, fading into the soft white haze like the final shot of Thelma & Louise. It is a disquieting thing to observe, one that seems destined to be captured by the right painter on a Turner-sized canvas.

Is it safe? As it was being built, the Skyslide was put through a battery of tests from the engineers at the Los Angeles Department of Building and Safety. 12,000 pounds of sandbags successfully made it down, a weight limit unlikely to be reached while the slide is in action as only one person is allowed down at a single time. If there is an earthquake, the structure is designed to move gently along with the building.

That said; it is a slide. The generation that has grown up with the safety slides made from recycled soda bottles may not know this, but slides are meant to send you down fast. This became an issue recently when a 57-year-old woman from Woodmere, New York went down faster than she expected and caught her ankle in a gap between the slide and the landing mats. The day after I visited the slide, she filed a lawsuit against OUE Skyspace asking for unspecified damages.

Litigiousness aside, the slide is an attraction the likes of which Downtown L.A. has never seen—the kind of tourist catnip one expects in the theme parks far afield from the city’s core. Indeed, the closest thing Downtown L.A. had to it was Angel’s Flight, the 115-year-old funicular across the street from Grand Central Market that inched up Bunker Hill at around the same pace the line for the Skyslide crawls forward. Fittingly, Angel’s Flight has been closed since an accident in 2013, the same year OUE began the $50-million renovation on the U.S. Bank Tower that would include Skyspace and the slide.

But while Angel’s Flight is decidedly Wes Andersonian, the Skyslide is Michael Bay all the way. Indeed, it is in many ways OUE’s attempt to recapture some of the thrills that the building has given to pop culture. Filmgoers have already seen the tower bite the dust in 1996’s Independence Day, and it just missed Dwayne Johnson’s chopper when it toppled over in last year’s San Andreas.

But the only thing likely to crumble during a typical visit is your sense of self. You can feel pretty small up that high, about the third of the elevation of Sandstone Peak, the highest point of the Santa Monica Mountains, the coastal range that parallels the Pacific. Perhaps some of your deep-seated fears might dissolve as well, provided you are willing to push past them.

“The really hard part about the slide is just walking yourself through doing it,” says Ludvik. “You have spent your entire lifetime training yourself not to launch yourself off tall buildings or step off cliffs. So you have to turn off this hardwired part of your brain that is telling you, ‘Don’t do this.’ But then once you do it, you are going pretty fast. It is an incredible rush if you can get past that scary part.” 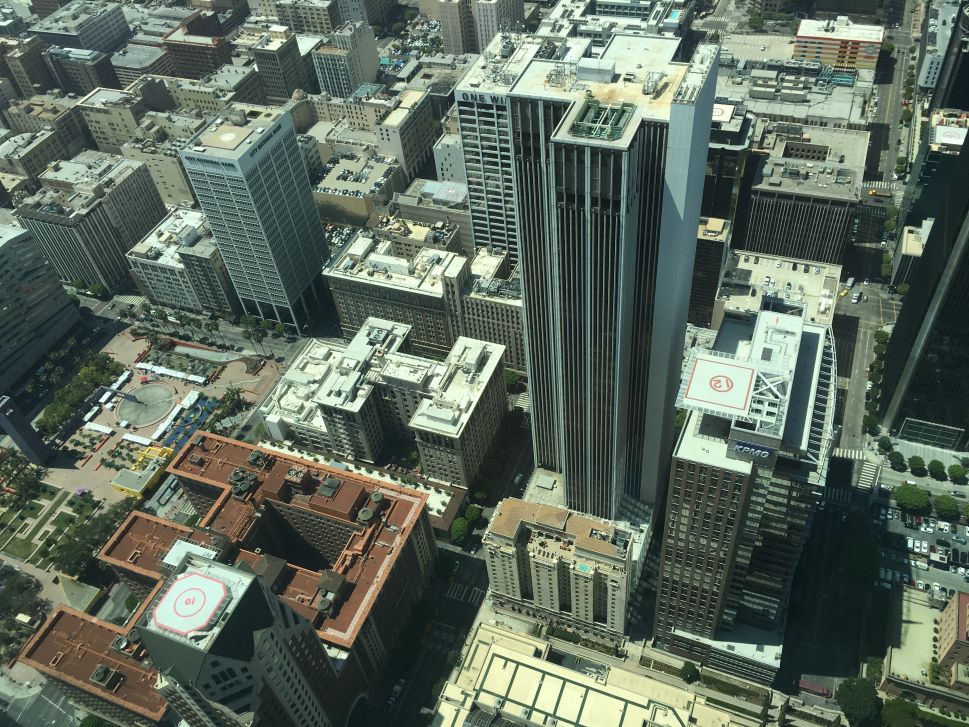