CLEVELAND—Cheers turned to boos on Texas Sen. Ted Cruz when it became clear he didn’t intend to endorse ex-rival Donald Trump in his speech to the Republican convention tonight—and instead was making the case for his own next run at the White House.

In an extended onstage address, the Tea Party champion only once uttered the name of the man who beat him in a bitter primary battle. Instead, he gave a lengthy dissertation on his conservative, free market ideals, which argued were the ideals of the party—and the ideals that GOP voters should support.

“I want to congratulate Donald Trump on winning the nomination last night,” he said. “Like each of you, I want to see the values our party believes to prevail in November.”

Cruz paid tribute to the cops gunned down in Dallas earlier this month, to American soldiers, to the battles to end slavery, to put a man on the moon, to end segregation. More than anything, he elevated his notion of freedom.

“I am here to tell you there is a better vision for our future: a return to freedom,” he said. “Freedom will bring back jobs and raise wages. Freedom will raise people out of dependency to the dignity of work.”

Each statement the lawmaker made prompted applause and whistling from the audience. He dropped references to Trump’s campaign trail rhetoric, calling for “an immigration system that puts America first and, yes, builds a wall.” But the audience began to revolt when it became clear that he wasn’t going to announce his support for the nominee. Chants of “Trump” and “We Want Trump” broke out in the crowd.

“We deserve leaders who stand for principles. Who unite us all behind shared values. Who cast aside anger. That is the standard we should expect from everyone,” he said, all comments that could be interpreted as jabs at Trump. “To those that support that. Please don’t stay home in November. If you love our country, and love your country as much as I know you do, stand and speak and vote your conscience. Vote for candidates up and down the ticket who you trust to defend our freedom and defend our Constitution.”

It was at that point the heckling broke out in earnest. Cruz dismissed it as mere ebullience from Trump’s home team.

“I appreciate the enthusiasm of the New York delegation,” he snarked.

The jeers spread across the stands of Quicken Loans as he continued his speech. Some on the floor chanted “say his name.”

Former House Speaker Newt Gingrich, who spoke subsequently, took a moment at the beginning of his remarks to “correct” Cruz.

The Trump-Cruz rivalry was one of strangest storylines in a political season fraught with bizarre plots and subplots. It started with the pair trading public praise last summer, and even co-hosting a Washington D.C. rally in September against President Barack Obama’s plan to lift sanctions on Iran. Many observers at the time speculated that Cruz hoped to reap the windfall when Trump inevitably dropped out of the contest and his followers searched for another outsider to back.

Instead, Cruz reaped the whirlwind. Their competition turned savage in the weeks before the Iowa Caucus, with Trump questioning the Canadian-born Cruz’s eligibility for the presidency and Cruz mocking Trump’s “New York values.” The Texan bested the businessman in the Hawkeye State, but the Queens-native quickly racked up a string of success of his own. As more and more of their opponents exited the race, the two dueled across the South and the Midwest—sometimes Trump triumphant, sometimes Cruz.

As the storyline approached its end, Cruz labeled Trump a “pathological liar” and “narcissist” and Trump suggested Cruz’s father had been involved in the assassination of President John F. Kennedy. But once the Manhattan developer defeated the Tea Party lawmaker in Indiana, the latter candidate abandoned his quest for the White House—leaving Trump to claim the GOP nomination. 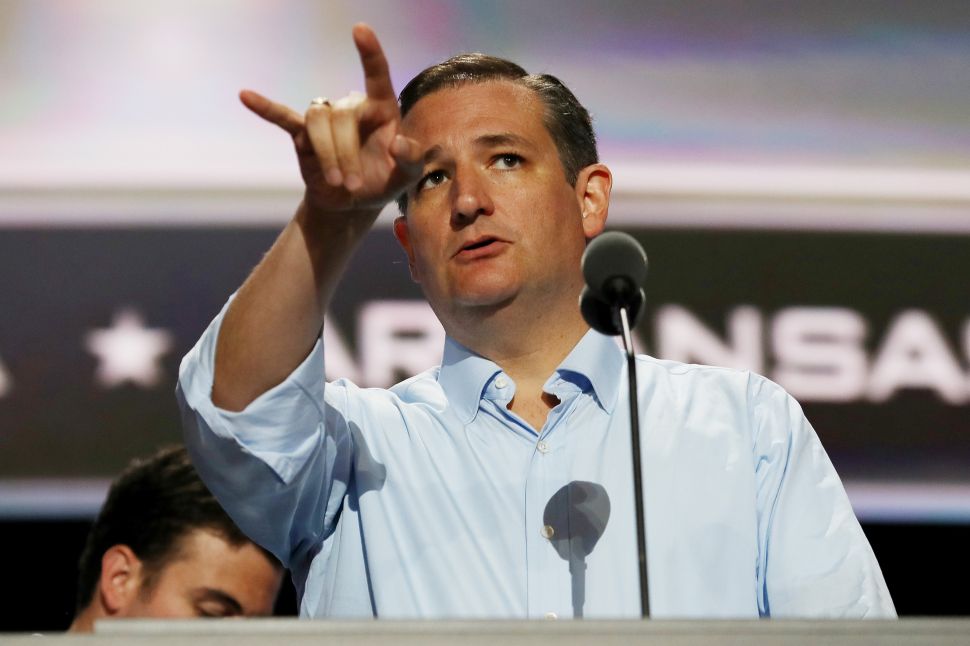