Obviously, the most fun you can have at a convention is not at the convention itself. That’s all scripted for the benefit of the television audience, and to some degree the delegates who care about whether the Alaskan delegate count is off by two or not, which the chairman of the RNC and the speaker of the House of Representatives—yes, the man third in line for the presidency—adjudicated from the stage to the stupefaction of every single person not from Alaska.

The real fun is to be had at the parties. In fact, one measures his value to society by the awesomeness of the convention parties to which he is invited. And even that is fraught—Facebook invited me to its big party with Newt Gingrich but I was ineligible for the VIP section and there aren’t enough Facebook-logoed bags and sunglasses to make up for that slight. Buzzfeed invited me to a killer party atop Azure and even gave me a coveted plus-one—but then its editor hit me with all kinds of questions I’m unqualified to answer even before I drank one and a half of their bespoke mind erasers. The executive director of the Republican Jewish Coalition, a close friend for 10 years, asked for a thousand-dollar donation before I could come in their suite to look for kosher snacks. Pass!

So imagine my delight at the accidental discovery of a secret party that’s taking place every night in the bowels of Jacobs Field. And you can even smoke. But there’s a back story.

So imagine my delight at the accidental discovery of a secret party that’s taking place every night in the bowels of Jacobs Field. And you can even smoke. But there’s a back story.

It’s not always easy to find New York storylines at a Republican convention, even in this year of twin New York nominees. Sure, they played “New York, New York” when Donald Trump crossed the threshold of 1,237 delegates. And the New York State delegation even switched with Michigan so it could be New York that put Trump over the top. Still, one New York storyline did come to mind, and it did so in the form of one of those great secret-society parties that convention junkies live for.

Producing a major party convention in the modern era is mindbogglingly complex. The logistics, security and themes take years of planning and then risk at least partial unraveling as events (hurricanes during 2004 and 2008 GOP conventions) or unpredictable candidates necessitate last-minute changes.

Bill Harris has played a role in producing every GOP convention since Bush 41 ran in 1988. He regards as his masterpiece the 2004 convention in New York City, for which he served as CEO and chief planner. George W. Bush was running for re-election in the first convention of the post-September 11 era, located in a heavily Democratic city that bore the brunt of the attacks. It was brilliant theater.

“That was my finest moment,” Harris told me last night in Cleveland, 12 years after the last time the country voted for a GOP president. “We really captured the pageantry and glamour.” I reminded Harris that he and I had attended a couple Yankee games together back then and usually ended up at the Havana Club for a cigar. He looked furtively left and right. And then he reached into his jacket pocket and handed me a numbered invitation (“my last one”) and directed me with intense precision to a hidden and walled-off corridor on the fourth floor of the east parking deck, “past the blue curtains and makeshift drywall.”

The Ledger Lounge is a private party that opens an hour prior to the festivities and closes an hour after. It’s hosted by Bill himself, plus power lobbyist Ron Kaufman, who is co-chair of the RNC Rules Committee, and Alex Castellanos, the mustachioed political consultant who appears frequently on CNN.

After walking down a concrete path so scary and desolate that it felt like when Jimmy Conway was telling Karen Hill to grab herself some dresses in Goodfellas, an unmarked door appeared. Inside, there was an entirely different scene.

Kaufman and Castellanos took in Donald Trump Jr.’s speech while pecking out thoughts on their smart phones. RNC director of strategic partnerships Mike Mears chatted with Texas-based Republican operative Matt Mackowiak. And everybody was smoking like crazy. Cigars, cigarettes, even pipes (the sponsors are the Cigar Association of America, the Pipe Tobacco Council and Maker’s Mark). It’s a subversive (and to my cigar-appreciating eyes welcome) sight at a convention in which a theme has emerged that “the government” is crushing its citizens with over regulation.

I stayed for the length of a Monte Cristo while my friend seemed to get high from a single cigarette and a room thick with second-hand wonderfulness. As we left, I thanked Castellanos for the party. “America’s the greatest country,” he told me. 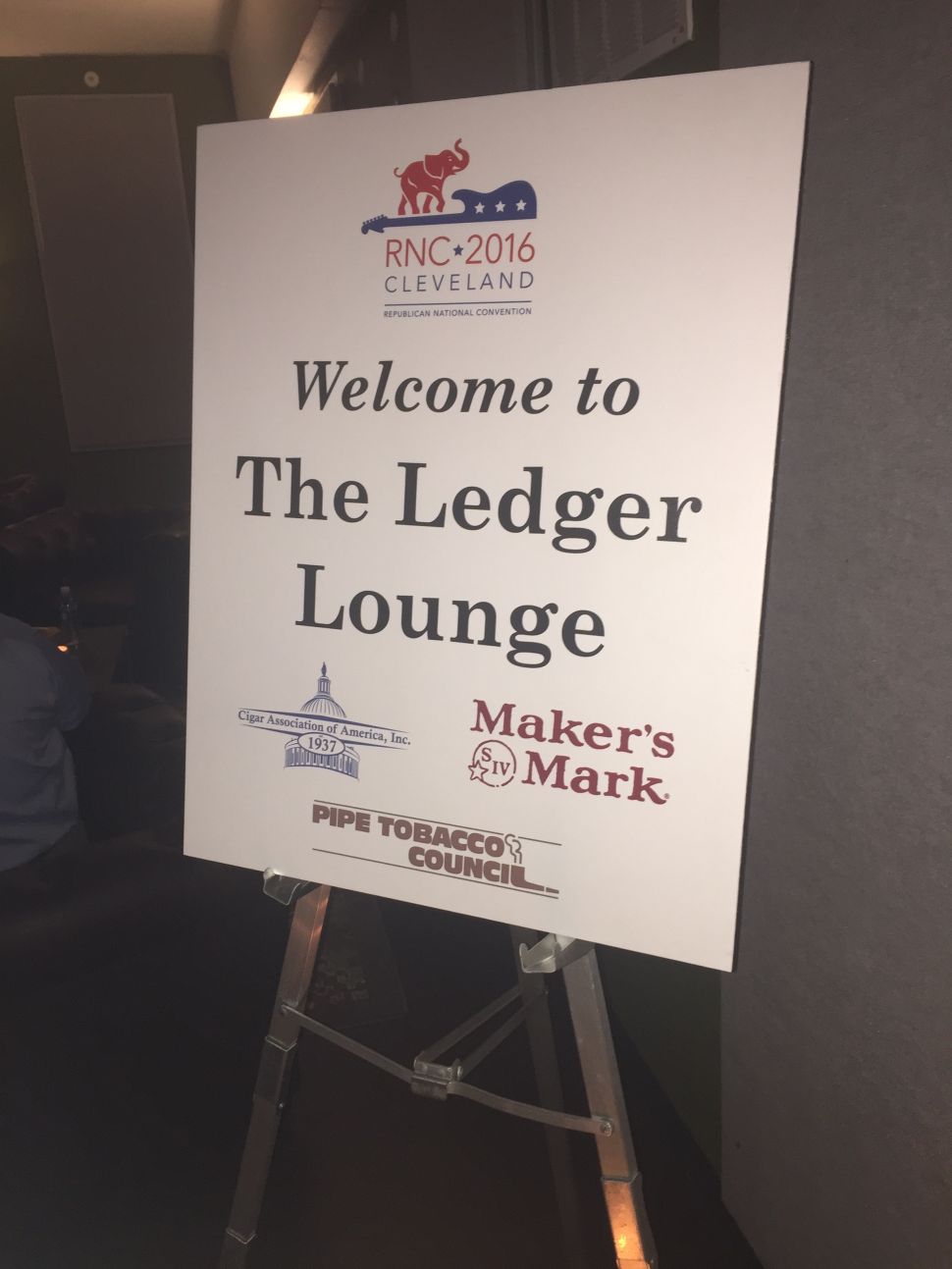