There’s been a lot of heat on the new Ghostbusters reboot, directed by Paul Feig and starring Melissa McCarthy, Kristen Wiig, Kate McKinnon and Leslie Jones. A lot of the criticism has, unfortunately, a nasty gender-bias, as male rights activist types worry about the sanctity of their childhood memories the way that fundamentalists worry that allowing gay couples to be on each other’s health care plans will ruin the sanctity of marriage. It’s a ridiculous argument, and one that has overshadowed any real conversation of whether this reboot is good or not. (Or, hey! A better question might be: why can’t we stop rebooting franchises in the first place and make some original films?)

I saw Ghostbusters yesterday, and I loved it. And interestingly, there was one particular gender-swapped character that was introduced and yet avoided this mainstream backlash.

Slimer, if you remember from the original Ghostbusters canon, is something of a chaotic neutral character. He appears in the first film as a being of pure ectoplasm haunting The Sedgewick Hotel, is eventually caught (and then accidentally released) and is last seen eating from a hot dog cart on 5th Avenue. In Ghostbusters 2, Slimer is even more of a Loki-like prankster figure, appearing merely to annoy Louis Tully, but generally not doing much damage. This is also where we learn that Slimer is corporeal enough to drive a car (albeit poorly). Director Ivan Reitman and co-writer Dan Aykroyd have referred to Slimer as “The Ghost of John Belushi.” In the original script, Slimer didn’t have a name, but was referred to as Onionhead because he smelled bad.

Now, here is where it gets interesting: from 1986-1991, ABC ran a cartoon series called The Real Ghostbusters. In one of those weird jumps of logic that happens when popular movies become franchises for kids, the relationship between Slimer and the Ghostbusters change dramatically. (See also: The Beetlejuice cartoon show, where the titular character is BEST FRIENDS with Lydia and takes her on adventures, despite their last interaction in the film to be at the altar during a thwarted attempt at forced marriage that would make Ramsay Bolton wince.) In The Real Ghostbusters, Slimer is an unofficial member of the team; a mascot of sorts. He shows up in the very first scene of the very first episode, and its clear that, as gross as he is, he’s an agent for good.

Slimer was such a popular character–we all remember that Hi-C beverage that bore his stamp of approval, despite the head-scratching marketing of serving ecto-ejaculate to children– that he even got his OWN spin-off cartoon from the spin-off cartoon: Slimer and the Real Ghostbusters.

In a way, Slimer is the un-living embodiment of the Ghostbusters brand: along with the logo, the visage of this particular green goblin is the iconic legacy of the series.

And yet, the new Ghostbusters reboot devotes very little time to the Slimester. In fact, he only shows up in the final third of the movie, hijacking the Ghost Mobile for another Manhattan joyride…with a Lady Slimer. Or at least, with a Slimer who is wearing a Ms. Pacman wig and lipstick, thus “presenting” as female to a character whose gender most of us never really questioned at the time (but was undoubtably male).

This is interesting. It implies that Slimer–who is a unique ghost in that he does not resemble a person–has a gender, and that gender (in the original series at least) was a heteronormative male. Thus, his counterpart is Slimer in “drag,” with bobbed blond hair and lipstick. It’s the equivalent of Bugs Bunny putting in a dress to lure Elmer Fudd. That is to say, Lady Slimer isn’t a “lady” at all: she’s just a reactive gender dynamic. As the blog Feminist Frequency would describe it, Lady Slimer is just another media portrayal of the “Ms. Male Character” trope.

We’ve defined the Ms. Male Character Trope as: The female version of an already established or default male character. Ms. Male Characters are defined primarily by their relationship to their male counterparts via visual properties, narrative connection or occasionally through promotional materials.

It may seem like a throwaway visual gag, but I think Lady Slimer can be read as a goofy middle finger to the knee-jerk chauvinism,  as personified by James Rolfe at CinemaMassacre (of which the movie has many…to the point where I started wondering if the viral-ness of this one male vlogger’s review was part of a larger conspiracy by the film’s marketing team). What’s great about the new Ghostbusters reboot, in my opinion, is that none of its characters are Ms. Male Peter Venkmans, Raymond Stantzs or Egon Spenglers. They are original characters whose motives and interpersonal dynamics are wholly original. Unlike Slimer and his new date, the reboot is more than the equation of  Ghostbusters + Wigs + Lipstick = RUINED CHILDHOOD.

And that’s why we should all celebrate Lady Slimer, in all her backward, Ms. Male Trope glory. Because we’re past that, now. And we’re not afraid of no ghost gender politics! 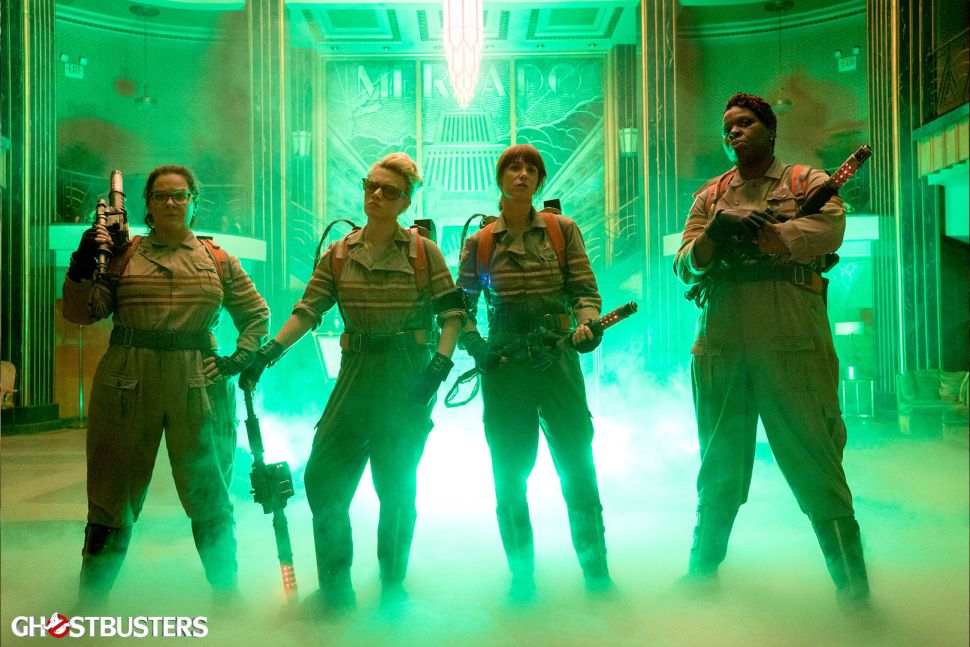