This has been one of the most out-of-the-ordinary seasons of The Challenge that has ever played out. We’re ten episodes in. We’ve seen a total of four Jungles. Only three teams have been eliminated because they brought Devin and Cheyenne back. Leroy got hurt and had to go back to bartending for Britney’s Vegas show. Brandon caught the homesicks and quit. Thomas’s girlfriend had a medical issue so he left. Tony and Camila were Tony and Camila and got kicked off. And last night, there was a full-out public meltdown where everyone openly debated their strategy with TJ during nominations. You know who wasn’t in the debate? Johnny Bananas and Sarah and Vince and Jenna. You know who the favorites to win this whole thing are? Johnny Bananas and Sarah and Vince and Jenna. Johnny was so outnumbered in the house and he’s going to steal this win. He’s going to steal this win like Mr. Robot stole that guy dating his therapist’s dog. Wait, is Mr. Robot Elliot or Christian Slater? I legit have no idea, I kind of just watch to see what Martin Wallström will do next.

You never, ever, never reveal your strategy in a public forum on a reality show. This new bit of TJ asking who you nominate and WHY changes everything. It doesn’t feel like you can lie to TJ but you need to lie to TJ. You can’t just lay out your whole plan like an old spy movie villain. We’re living in a post-Austin Powers, Hank Scorpio, Kingsman world. That move has gone meta now—the bad guy is in on the “reveal you r plan” joke and refers to it. That is the new cliché. You can’t tell TJ anything. Lie to dad. Dario and Nicole had a deal with Wes and Nany, and Nate and Christina, and Cory and Ashley, and Devin and Cheyenne to throw Bananas and Sarah and Vince and Jenna into The Jungle every time they could. But Cory was making deals and side deals and inside deals and outside deals. He got caught and Dario felt like he was betrayed because they’re boys so he needed to put himself into a position to be the third leg on the Bananas-Vince triangle. Gotta hand it to Bananas for letting all of this drama unfold around him without getting pulled in. He didn’t even light the match. He convinced someone with a cough, and a sore throat, standing in a puddle of lighter fluid on a freezing night that what they really wanted was a cigarette. They lit it themselves and blew it all up while he was across the street warming his hands in the afterglow.

But you know what, none of that really matters. Bananas felt like the clear winner from the first episode. He has the strongest team thanks to his “rivalry” with Sarah, which I will never believe is real. The win is inevitable. All there is to do is enjoy the ride. And this challenge is one of the most fun I’ve seen. TJ came to the house, a thing he never really does unless he’s kicking someone out. He tells all of the girls to leave and then disappears with them. The guys claim to be excited but they all kind of sit around moping because they think the girls are getting some great treatment. Well, don’t worry boys. They were getting buried alive. Look, I don’t want to see people get buried alive. That seems terrifying. But I do want to see these people get buried alive. Yes, that I do want to see very much. I only wish everyone could have been put in the coffins instead of just the women. Nate in a coffin? Super entertaining. Probably more entertaining than Christina. Christina was feeling drained even before she got buried alive. And Nate tried to console her like his dad always did with him. By saying: don’t be a wimp. Little young emo tattooed Nate at tee-ball, crying because the tee is taller than he is. Don’t be a wimp. Nate refusing to jump out of an airplane because he’s scared. Don’t be a wimp. Nate literally crying on some yoga mats because he overheard his best friend talking about him. Don’t be a wimp. Seems to be a really effective strategy.

The women are all buried alive and the men have to answer trivia question to advance close enough to dig them out. Except this isn’t really trivia. TJ loves Trivia and it’s fun to see how many easy questions they usually get wrong. But this was more like a Newlywed Game format where he asked the women for answers and then the guys had to match it. Of course the questions were all about strategy, another devious plot pulled off by mastermind gamemaker, TJ Lavin. Who is your biggest ally? Who is the sleaziest in the house? Who is the biggest idiot in the house? Sexiest guy? Biggest layup? Jenna voted for Vince as sleaziest and somehow Nany chose Bananas as sexiest even though she “hates” him now. Dario and Bananas got through the quickest and raced to dig out their partner. Dario was faster, leading to the incredible nomination ceremony mentioned above. Nate and Christina came in last because “don’t be a wimp” is not an effective way to get to know someone. And Nate has been too busy off with Nicole to spend any time talking to his partner.

But listen to me. None of this matters. For real. Because the best thing that has happened all season happened during this game. The players had to write their answers out on a card. And Dario, who has been living in a house with these people for weeks, wrote West for Wes. Dario 100% thinks that one of his closest allies previous to him curving them at the noms, is named something else. Yes, misspellings happen all the time. I don’t think anyone on Survivor has ever spelled someone’s name correctly on that scroll. But these people wear Under Armour with their names on the back like 18 out of 24 hours a day. They are literally wearing their name shirts while they are playing this game. And West is just close enough to Wes, that yeah I believe he actually thinks that is Wes’s real name. He wrote that on more than one occasion in the game. It is the best thing to happen all season. I want to go back and listen to every time Dario said “Wes” so that I can hear the “T” on the end there.  I’m going full cokedream Oliver Stone directing Kevin Costner in JFK on this. The evidence is in the tapes. 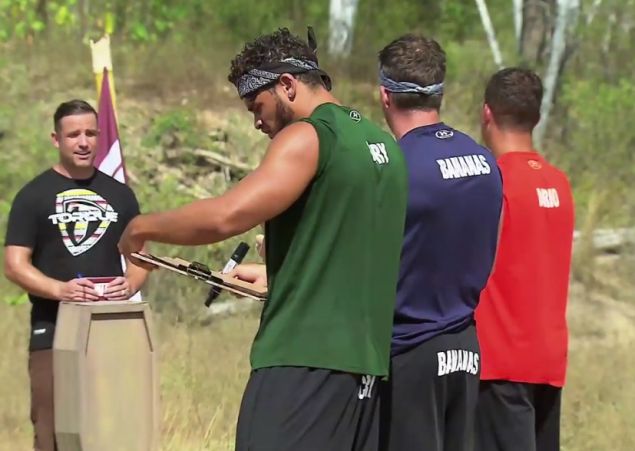 Dario went against West at noms and sent in Cheyenne and Devin and Cory and Ashley. And everything blew up. And it’s highly unlikely that either of those teams will lose to Nate and Christina but anything could happen. They didn’t show the elimination, that’s next episode. At this point, I’d be more surprised if The Jungle even happens. Feels like someone could quit or get hurt pulling the skulls out of the box, or a giant eagle could swoop down and carry Nate away while his dad screams “stop being a wimp!” at him. All of that is more likely than seeing someone on this show get eliminated this season. We’ll have to wait until next week. It won’t be hard because I will be tweeting about Dario writing West for the next seven days. 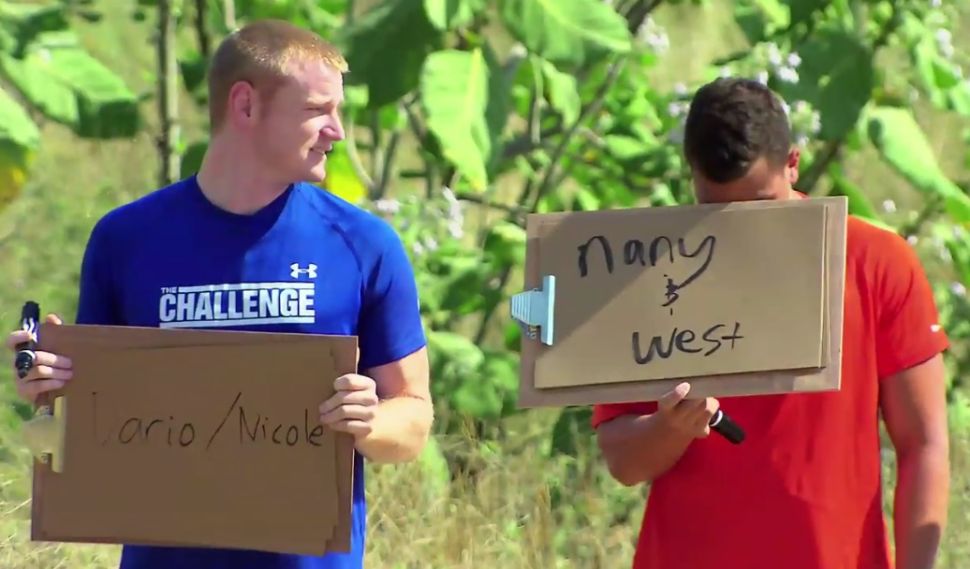