One time in a college film class final essay, I misused the word “penultimate” because I didn’t know that it meant “second to last.” “Ultimate” seemed like it was something incredible, like ultimate Frisbee and not something final. So I really believed “penultimate” was a word for “extra awesome” like in Three Amigos when Ned Nederlander thinks that “infamous” is when you’re more than famous. I ended up saying something like “Tarzan the Ape Man is the penultimate action movie of the ‘30s” which is a sentence of words that doesn’t mean anything. I accept this stupidity on my part. The bright side is that I’ve never forgotten what “penultimate” means since then. Proof: Last night was the penultimate episode of The Challenge: Rivals III. Redemption, finally.

Jenna and Zach have been dating since Battle of the Exes II. Last season, on Bloodlines Jenna was there with her cousin and Zach and CT showed up for a special elimination. And Jenna was like “that’s my boyfriend” and shot googley eyes at him. Cut to a few months later, Jenna’s been trying to get in touch with Zach but he’s not answering. And then when he does answer, he calls her Brooke. You can’t tell if he really screwed up or was just messing around with her. He tries to play it off like, “yeah of course it’s you, I know it’s you, you’re you, you.” Jenna’s concerned about whether she has a boyfriend or not anymore. But this storyline doesn’t go anywhere by the end of the episode, so either there will be some big revelation in the final, or they just wanted to get Jenna some screentime since the last few eps she’s been more invisible than Kevin Bacon’s face inside that skin mask in Hollow Man.

There are five teams left but only four of them get to go to Argentina with TJ, don’t cry for them. Devin and Cheyenne, who are so good at randomly pulling white skulls that people in the house consider it a skill now like being good at puzzles or building Legos, concoct a plan to pull all of the skulls out so that they can compete in the final elimination to redeem themselves for being eliminated week one and getting brought back due to so many disqualifications of other teams. This is the opposite of a very smart idea, it’d be like if Nic Cage in Con Air was like “well, I know I can continue to run at full speed even after I get shot in the shoulder but instead I’m just going to stop running and not use this god-given gift of invincibility against bullets.” If you have the touch of the white skull pull, you don’t tempt the natural order of things and try to get thrown in. The only thing that matters in the game is being safe. If you make it to the final and somehow win, what do you care how you got there? It will never matter. Devin will brag about anything anyway, so he would definitely enjoy having a win regardless of how it came about.

Devin and Cheyenne eventually decide against this strategy after Sarah and Bananas win another challenge. Each team was put into an oversized shirt and could only use one of their arms, like a live action Two Bad from He-Man. They had to build a bridge out of puzzle pieces, but in between also did things like braiding three strings, jumping rope, and untying knots—stuff that sounds easy but try doing it with only one arm each. Although, Sarah somehow braided the rope singlehandedly because I guess she has the dexterity of David Blaine’s close up magic fingers. Dario and Nicole came in last, which allows Bananas to continue to save his cousin Vince, who is not good at challenges.

Johnny and Sarah had another celebration dinner and since they knew they weren’t backstabbing their goofball third-wheel cousin, they didn’t show them deliberating about who was going in, it was Wes & Nany and Devin & Cheyenne. Although, there was an interstitial of Devin and Cheyenne presenting the “F.U. Report” about how Bananas has been against them this season, which looked pretty funny. They did show Johnny and Sarah continuing to try and convince us of this charade that was their fight and I am still not buying it. Just give it up already. Johnny is all “even recently I was thinking ‘am I over this’ and then you walked in the room and I was happy to see you.” Yeah, because you guys were friends and are friends and just because you get into an argument doesn’t make you rivals, especially when you’re just about guaranteed to win another Challenge because of it. It bugs me when Sarah says “what I stole from you” in regards to her eliminating Johnny on the Challenge  she won because it wasn’t his, she played the game and won from it. That’s the whole point of the show. It’s not called “Watch Bananas Win” even though that happens a lot. Although, that just shows how weak of a partner Vince is, because basically if John gets partnered with someone semi-competent, he will win—which didn’t happen with Vince.

This sets up Devin and Cheyenne to do their skull magic, which of course they somehow pull off because what is dead cannot already die and technically they were eliminated week one so they can’t be eliminated again in skull law so they must abide by this and come out white. Which in turn sets up the first time bloodlines have to face each other in an elimination. Nany and Wes vs. Dario and Nicole. I do want to see bloodlines go against each other. I’d love to see Bananas and Vince compete. Or Abram and his brother, because they’re both super competitive and might actually kill each other and be fine with it like, “that’s the way he would’ve wanted to go, he fought well, I’ll see you in Valhalla brother.” But Nany going against Nicole isn’t that exciting to me. Nany didn’t want to get physical with Nicole, who is much smaller. The whole thing was sort of a non-event, except Nicole got super upset after she won because she eliminated her cousin. I don’t want to see Nicole sad.

The final four head to Argentina after a Beatles A Hard Day’s Night montage of them running through the airport. Devin and Cheyenne are stuck with three teams that all worked together and are the odd group out. This comes to a head when Johnny and Vince badger Cheyenne by calling her the wrong name. Cheyenne gets upset that they keep saying “Chantelle” and nobody really stands up for her, or at least they don’t show it. Vince is lit, and continues to go on about it, even after Bananas stops. He keeps at it throughout the night, on the bus home, and even in their hotel room. There’s a point where Cheyenne is basically in tears and he keeps going. Dude is the worst, he’s that guy that thinks he’s being funny but nobody is laughing so he keeps going harder. Cheyenne talks about being bullied in high school and college because of her race and Vince doesn’t see how calling her by another name is plays into that. It just goes too far.

Next week is the finale, and someone (Johnny and Sarah) is going to win. But who knows, 2016 has been a strange year so maybe someone pulls off an upset. I hope Jenna makes it to the final, even if it means dragging Vince along, because she’s made it in every season she’s been on which is a dope record. Finals are always great, this is what it’s all for, so I’m excited to see what kind of craziness they have lined up. 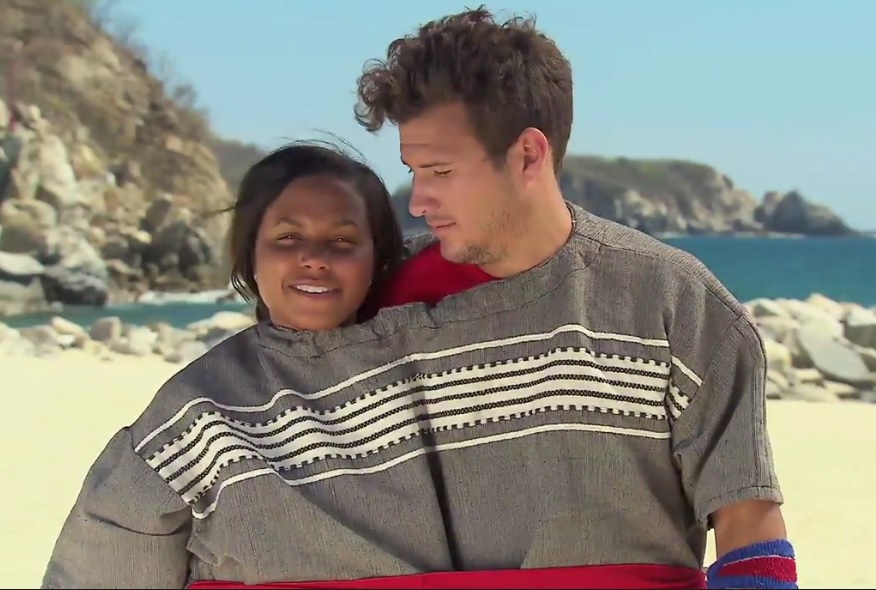