The Republican Party conclave this week was as messy and amorphous and iconoclastic as the man who claimed the GOP crown Thursday night. And it fit perfectly with the vision of a world careening out of control that he shouted from the podium, from the jumbotrons hung around Quicken Loans Arena and from TV screens all across America.

“This is the worst organized convention I’ve ever seen. Just the logistics of it,” one Republican National Committee source told the Observer, blaming a lack of funds to hire the staff needed to manage the mass gathering.

But it wasn’t just the sparse choreography that made the convention feel like a circus commandeered by the animals. The entire proceeding seemed shot through with the wild mood swings and sense of underlying dubiousness that have characterized Donald Trump’s whole improbable presidential run.

Is this really happening? Is that really the actor from Charles in Charge talking? Did that Italian underwear model really go out and claim President Barack Obama is a Muslim after wrapping up his speech? Did Melania Trump really parrot the exact same lines in her address that Michelle Obama uttered at the Democratic convention in 2008?

And that was just the first night.

When the energy in the room was right, it was like a scene from a Roman coliseum. In the grip of a blood-frenzy, the delegates and spectators screamed from the seats as their champions in the pit flayed raw red meat from their enemies. Obama, Hillary Clinton, political correctness, identity politics, Black Lives Matter—all got dragged into the fray and mercilessly slaughtered, while the crowd howled for more.

These were the professional gladiators, master showmen, concert maestros drawing the perfect note of exhilaration and outrage from the orchestra ranged around them. And the vast parabola of the stadium amplified that note into an anarchic symphony.

Clinton was not just a career political opportunist with a record of questionable ethical, professional and policy decisions. No, Clinton was a criminal a dozen, a hundred, a thousand times over. One Trump delegate demanded in a talk radio interview that she be shot for treason. The rest of the audience seemed content to burst into periodic chants of “lock her up, lock her up.”

“Lock her up, I love that,” Florida Attorney General Pam Bondi laughed from the stage. She wasn’t the first to echo or encourage that sentiment. She wasn’t the last either.

But punctuating, puncturing really,  those moments were the countless tedious or out-and-out bizarre spiels from a parade of oddly chosen Trump associates and employees. The lost, halting Michelle Van Etten of Women in Business for Trump, the impossible-to-follow Mark Geist and John Tiegen of the Benghazi Annex Security Team, the listless businessman Phil Ruffin, the rambling retired Lieutenant General Michael Flynn—all there to patch gaps that at an ordinary convention would be filled by prestigious politicians.

The energy drained from the room and the crowd soon followed. Iowa Sen. Joni Ernst, who became a political star by promising to “make ’em squeal”—”’em” being the Democrats—couldn’t rouse a peep out of the four or five Republicans still hanging around when she spoke after Flynn Monday night.

The other “establishment” figures who stopped by fared slightly better.

Eternally stern Senate Majority Mitch McConnell ignored the boos that greeted his name, bluntly delineated his policy objectives, explained his distaste for Clinton and vanished from the stage. House Speaker Paul Ryan, as chairman of the convention, wasn’t so lucky. The Wisconsinite rattled through parliamentary jargon and praise for Trump in the same tight-faced monotone. When the audience got unruly, he stood looking sheepish and uncomfortable, and at one point shushed them like an irritated teacher.

A few of the vanquished—ex-Texas Gov. Rick Perry, Wisconsin Gov. Scott Walker—paid their tribute to the conqueror in person. Sen. Marco Rubio decided to stay at the safe distance of his native Florida and declare his surrender remotely. The spirit of Ohio Gov. John Kasich seemed to haunt the whole affair: his face appeared in guidebooks, his voice on videos, but he refused to come to his own party’s convention in his own home state.

Retired neurosurgeon Ben Carson, another of Trump’s rivals-turned-cheerleaders, added to air of absurdity by pointing out there was just one degree of separation between Clinton and Lucifer.

Of course, there were still pockets of anti-Trump resistance, in the Virginia and Colorado and Utah delegations. After failing to force a roll call vote on convention rules the first afternoon, these straggling remnants of the Never Trump movement marched out of the building in defeat. Their Charles de Gaulle, Texas Sen. Ted Cruz, got booed down Wednesday night when he used his time slot to make a self-promoting paean to “freedom” instead of vouching his support to the nominee.

Trump himself trampled over the established norms and decorum of the event with the indifference of an elephant. He broke with years of tradition by cameoing onstage Monday night to introduce his wife. He made his entrance in silhouette, to the blasting strains of Queen’s ‘We Are the Champions,’ in the style of a game show host or pro wrestler. Half the people watching wondered what was going on. The other half wondered who forgot to rent the fog machine.

He jetted back to New York so he could address the crowd via videostream from Trump Tower Tuesday night. He flitted back to Cleveland on Wednesday, dropping his private plane off at an airstrip and hopping aboard his personal helicopter to fly a few hundred yards and appear at a staged arrival event.

The only one who seemed to impose some kind of discipline on the proceedings was Trump’s running mate, Indiana Gov. Mike Pence.

Forget that Pence gained fame in the political world as an unrelenting ideological conservative, forget that as governor he signed off on social policies so severe it provoked several states and businesses to launch an economic embargo of Indiana. For 35 minutes, the Hoosier was a rock in a stormy ocean, a folksy voice from the past talking about old-fashioned Republican topics like tax cuts and credit ratings and just how much he loved his mom. When the “lock her up” chants began again, he told the audience to “hold it.”

Then the convention adjourned again, the next day came and another wave crashed over Quicken Loans arena.

The city outside the arena seemed a little more controlled.

The protests stayed tame, as if the demonstrators had exhausted themselves over the last angry year, and they politely confined themselves to the city’s Public Square. At the delegation breakfasts in the mornings, at the restaurants and hotels of downtown Cleveland in the afternoons, at the bars and parties late at night, people seemed calm and contained.

They came from different states, different cultures: stodgy old men wearing suits and combovers, their wives draped in polyester dresses and pearls. Blue collar middle-aged Texans and westerners dressed in denim and cowboy gear. Trim, flashy millenials from D.C., the girls delicately maneuvering around their tight skirts and high heels. Most of them were white, but hardly all. Numerous black and Asian faces talked and laughed and squeezed into photos with the rest.

But the atmosphere of entropy seemed to emanate from the convention center into the approaching streets.

The midday media coverage was just as outrageous as the news at night. The Trump team put out a half-dozen contradictory statements excusing and explaining Melania’s obvious cribbing from Michelle Obama—not one of them plausible. The blame eventually got unloaded onto a longtime Trump ghostwriter with the unlikely name of Meredith McIver. It seemed almost like the strategy was to confuse people to the point where they stopped caring. If you believed there was any strategy at all.

Campaign manager Paul Manafort called Kasich’s absenteeism “embarrassing.” Kasich’s political strategist John Weaver called the Trump campaign “a clown show.” Then, on Wednesday night, the candidate set the Western world on fire by telling the New York Times that his administration might decide not to ride to the defense of a NATO ally if Russia ever invaded.

Finally, Thursday arrived. In yet another sign of internal and external turmoil, a pro-Clinton political action committee got its hands the text of his speech, and leaked it with their critiques to the press shortly before the ceremonies began.

Following address by his daughter Ivanka, the massive platinum-lettered name “TRUMP” appeared onscreen. An explosion of applause and camera flashes broke from the audience as he assumed the stage. When he finally reached the lectern, his face replaced his name on the screens.

For more than an hour, the face bulged and grimaced and contorted, like it was straining to dredge up the darkest and harshest images of America it knew.

“Americans watching this address tonight have seen the recent images of violence in our streets and the chaos in our communities,” it shouted, the first of many allusions to shootings of police officers, the most recent of which happened on Sunday. “I have visited the laid-off factory workers, and the communities crushed by our horrible and unfair trade deals.  These are the forgotten men and women of our country. People who work hard but no longer have a voice. I am your voice. I have embraced crying mothers who have lost their children because our politicians put their personal agendas before the national good.”

It was a longer, angrier, more grammatical version of the stump speech Trump has made famous at rallies across the country.  It cherry-picked statistics, fudged numbers, made all-but impossible promises.

It was also probably the single most organized part of the entire week. 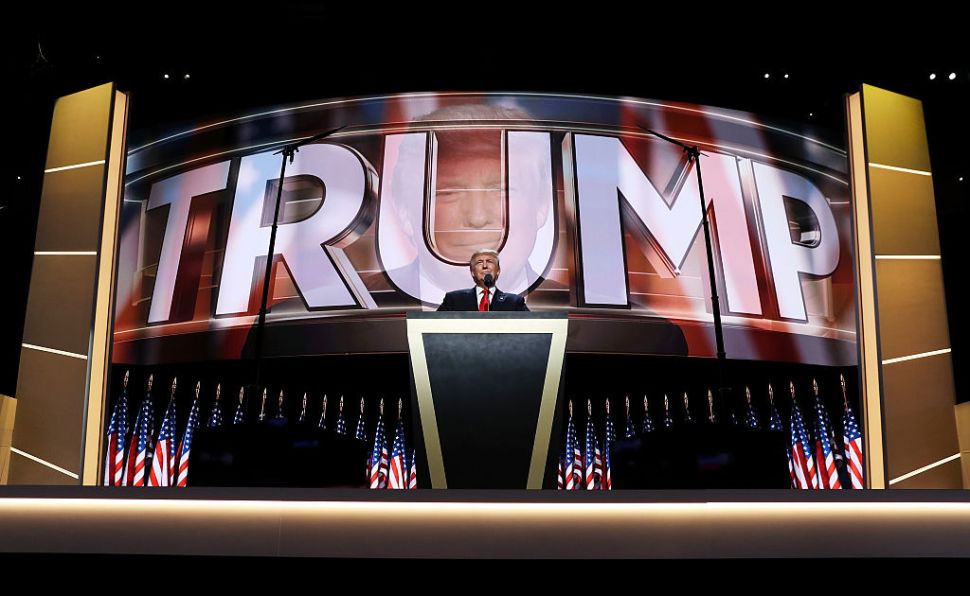