By now you most likely know about all the major Emmy nominations, which are as uninteresting as you could imagine besides the fact The Americans finally got some love but Crazy Ex-Girlfriend stayed largely ignored because Emmy voters think The CW is a place poor people go grocery shopping.

But most likely you did not go exploring through the official Emmy nominations website, which means you haven’t encountered this:

See that line, “All Other Award Categories (scroll page to see all)”? That is basically The Wall from Game of Thrones, separating order and society from chaos. We don’t go past that. It’s the shadowy place from The Lion King. You must never go there, Simba.

Except the lesser known Emmys are actually super interesting, if you ever wade into them deep enough. It’s easy to debate whether John Travolta or David Schwimmer did the best human impression in The People v. O.J. Simpson: American Crime Story. But there are hundreds, hundreds of people whose names you’ve never heard of, people whose sole job it is to sew Kit Harington’s britches or make sure there are no tango-related deaths during Dancing with the Stars, who are awaiting the 68th Annual Emmy Awards with baited breath.

That’s where things get interesting. Come with me, over The Wall, to debate the good and bad of the “All Other Award Categories” section of Emmys 2016:

GOOD: It’s Love, Hope, and Diversity vs. Willem Dafoe in a dress for Outstanding Commercial. The Commercial category is always one of my favorites, because due to the sheer amount of ad campaigns per year you always get heartfelt, genuine tearjerkers next to, like, dancing hamsters driving a Kia or something. This year, you have the Ad Council’s “Love Has No Labels,” a beautiful message of diversity and inclusion, going up against a brief history of how Marilyn Monroe would turn into the Green Goblin from Sam Raimi’s Spider-Man whenever she didn’t eat her Snickers.

BAD: KING SHARK SNUBBED. No one has ever accurately explained to me what “Outstanding Special Visual Effects in a Supporting Role” means exactly, or how it’s any different just plain old “Special Visual Effects.” But just going off context clues, you’d have to imagine the amazing eight-foot tall CGI manshark wearing board shorts named King Shark from CW’s The Flash has to fit the bill. At least better than anything in Better Call Saul (nominated for “Fifi”) or Sherlock (nominated for The Abominable Bride). However, with that said…

GOOD: 11.22.63 for Outstanding Visual Effects in a Supporting Role. 11.22.63 was on such a level of so-ridiculous-it’s-a-masterpiece that it literally drove me and my fellow recapper Drew Grant insane over the course of seven weeks. It’s in this category for its premiere, “The Rabbit Hole,” which is hilarious because, again, I have no idea what Visual Effects were actually nominated. For now, I’m going on the assumption that the role of Bill Turcotte, which I thought was played by George MacKay, was in reality a complex combination of CGI and string puppetry.

BAD: “Winds of Winter” NOT nominated for Outstanding Music Composition (Original Dramatic Score). Listen, there’s a ton of things Game of Thrones’ finale realistically could have been nominated for, including whatever category covers deaths by homeless children bearing daggers, but to forget its music is a crime worthy of whatever is happening to Septa Unella right now. “The Light of the Seven,” that moody, intense and most importantly un-Game-of-Thrones-like tune that soundtracked the first ten minutes of the episode is some of the most haunting, affective music I’ve ever heard on TV.

GOOD: Gotham gets “Outstanding Stunt Coordination” nod. Realistically, this category is a toss-up between Marvel’s Daredevil, which I’m pretty sure employs actual ninjas, and Game of Thrones, which if you missed it staged an epic medieval bloodbath but for realsies. But Gotham, my sweet, innocent, stupid Gotham, deserves some recognition in this TV landscape too crowded for balloon-based villains. If Gotham pulls out the upset here, know for absolute 100 percent certainty it is because of this moment right here:

BAD: Bojack Horseman in general. Netflix’s “depression and paranoia in LA” story disguised as a colorful cartoon could genuinely, in my book, be up for “Outstanding Comedy Series” alongside Transparent, Black-ish and Veep. But that’s asking a lot from Emmy voters, many of which were alive when cartoons were invented. But even AS a cartoon, Bojack gets no play – no “Outstanding Animated Program”, no “Character Voice-Over Performance”, not even an “Outstanding Children’s Program” by accident. 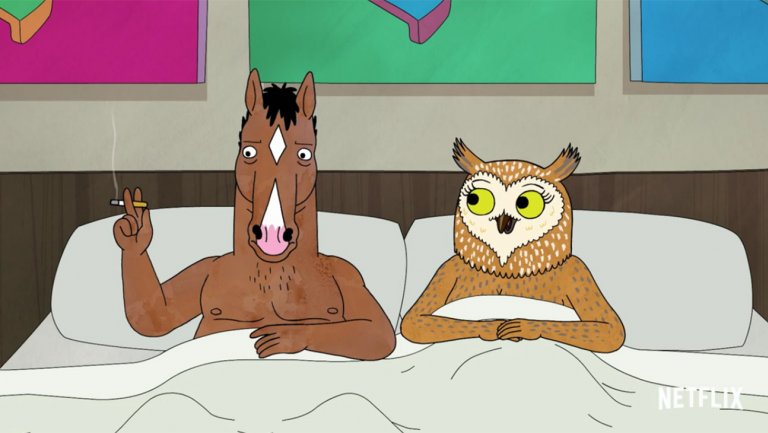