While to most New Yorkers the word ‘showtime’ is most commonly associated with almost being kicked in the face during the morning commute, documentary filmmaker James Burn‘s latest film ‘We Live This‘ tells the stories of four boys who formed one of those dance crews. The film, named after the group, focuses on the boys lives outside of the trains, as they struggle with poverty and homelessness in the city. Burns is no stranger to hardship, in 2014 the film Jamesy Boy based on his own life growing up in the criminal justice system was released. ‘We Live This’ has been featured in film festivals across the country, with a Special Jury Mention at Tribeca Film Festival in 2015, and won first place for Best Short Doc at Edmonton International Film Festival after its release in October of 2015. Most recently, the film was selected for the Saatchi & Saatchi New Directors Showcase at the Cannes Lions International Festival of Creativity. We Live This will be shown among other short films at the Rooftop Film Festival in Brooklyn this Friday.

What inspired you to create ‘We Live This’? Well I ride the train just like everyone else. You know, I’ve never been a fan of showtime, nor have I just liked it either. I saw these guys, who were incredibly charismatic, and I wanted to know who they were outside of the train. I mean, every day in New York we kind of get in this zone where we’re trying to get to Point A and Point B and I know most people find them to be an annoyance. I wanted to know who they were.

And what did you think when you first saw them? I thought they were charming. I thought they were very charismatic. I thought there was something special about them, and it had a lot to do with their energy, not necessarily the dance skills or anything. Again, even sometimes when I get on the train and showtime comes on I’m indifferent. The word I’ve been hearing a lot is a ‘captive audience’.

What did you learn from making this documentary and what do you want people to take away from it? I think I learned the same thing that I learn from every documentary: to be closer to my own humanity because you’re telling other people’s stories, you’re telling other people’s lives. Never assume you know what someone else’s situation is. What [do] I want people to take away from it? I hope that New Yorkers are able to just see these guys as not just showtime performers that are annoying, but who they are outside the train.

In an interview with Indie Loop about your film, ‘Revolving Doors,’ you said that “It’s not a message film. It’s about taking responsibility of being an individual rather than a label.” Do you feel the same way about ‘We Live This,’ or do you think this film has a message? Same thing. I like character driven pieces and that’s what it is. There’s no message in this film. It’s strictly character driven and it’s the hearts and mind of these four young men. And they are a part of this city whether you like them or not and I just thought they should be heard.

What do you think is the value of having your story heard? The value in it? That’s not up to me to decide, that’s up to the audience. Again, I make films that inspire me and I hope to inspire other people. For me, it’s a way of living and breathing. And why should I be the one to tell this story? I don’t know. We bonded. We clicked. Sometimes it just happens like that.

When you first spoke to them, did you have to convince the boys to do the film with you? What was that conversation like? They were definitely kind of wondering who I was. I’m just some random guy asking them about their lives, and when I introduced myself I told them a little bit about my personal story, which you know is similar to some of theirs in some respects. I think that’s how we bonded. I’ve had my life story told, depicted in a film, and I remember what that was like and I remember thinking, wow, that could be really invasive and my privacy could be ruined after that. But at the end of the day, I made that film because I wanted other people who were going through what I was going through to have a little bit of hope and be inspired. I think they felt the same way.

Forty, one of the group’s members, said “This is begging without words.” Is it a form of begging, or is it a form of expression? He’s expressing himself for sure. Everybody wears these invisible signs that say “Validate me,” and Forty is very talented, and he’s smart, and he wants to be validated just like everyone else. Unfortunately, being stuck on the train and being a showtime performer, isn’t the best way to get yourself known, but it’s what he knows how to do for now. And it’s actually getting [them] some places. This isn’t what they want to do forever.

Do you know if any of the group’s members ran into trouble with police officers? Yeah, all the time. Even off the train they get profiled and pulled over and searched. They are always having problems with the police, and they’re not bad kids, they’re really not. They don’t rob people, they don’t steal. And even people that do that, I wouldn’t consider them bad people. 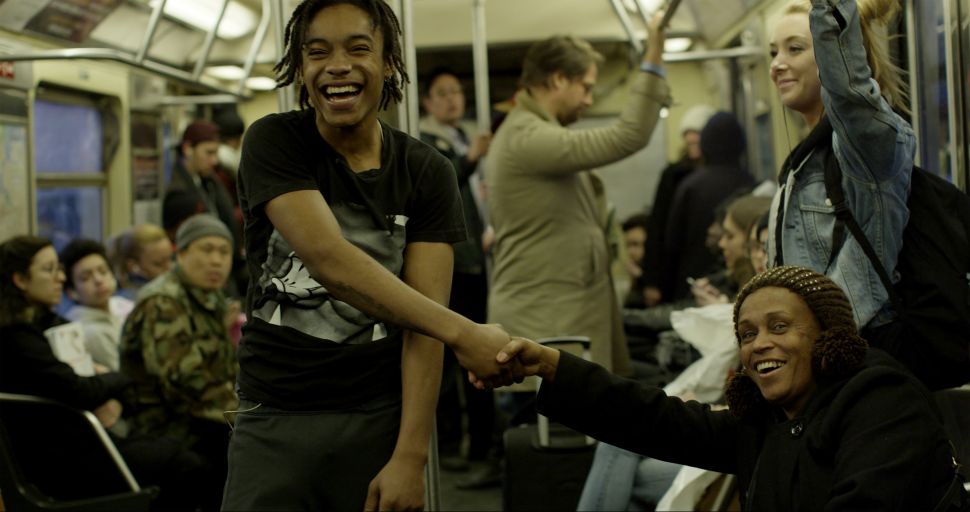