While not everyone could live happily in the types of trendy tiny homes currently taking over Pinterest and HGTV, the founders of a new startup from the Harvard Innovation Lab think everyone would benefit from vacationing in one.

The team at Getaway designs picture perfect tiny houses, places them in the woods outside cities and rents them out by the night to people looking to disconnect and recharge. The company—now backed with over $1 million in VC funding—launched in July of 2014 in Boston, and now they’re expanding to NYC.

“I’ve lived in all these weird places. I grew up on a boat, lived in the basement of the shop I opened and lived illegally in my college library,” Getaway co-founder and CEO Jon Staff, 28, told the Observer. “So the tiny house thing resonated with me personally—living in a small space with just what you need.”

I went upstate to try Getaway for a night in the Isidore, which is the largest of the three houses located outside NYC at 192 square feet. The minimalist interior of unfinished wood, accented only by white linens and the greenery visible through the massive windows, contained everything one would need for a few nights in the woods. There were two full beds (one lofted), a small kitchen area (with a sink, mini fridge, a two-burner cast iron cooktop, cookware, etc.), a table, a full shower, an electric toilet and books about tree houses, minimalism and nature. Outside was a fire pit, a charcoal grill and a picnic table, along with complete privacy. There’s no wifi, but hiking trails, swimming holes and waterfalls are just a short drive away. I have to admit, it was the most relaxed I’d been in a while.

“The thing I like to emphasize is that it’s really designed to be a wellness experience,” Staff said. “It’s different than staying in a hotel or Airbnb because we want to create it end to end. We don’t tell you where it is until you go to prevent you from planning it minute by minute. It’s more like going to the spa, meditation or yoga. It’s a reaction to technology and work filling every part of our day.”

Since launching the pilot in the woods outside of Boston with three tiny houses (The Ovida, The Lorraine and The Clara), Getaway has seen tremendous success, selling out 90 to 100 percent of nights for each house. The infamous hustle and bustle of the NYC work week attracted the founders—who knew they should hit the biggest “stress cities” first—to launch in the area. They said they’ll soon add 12 to 15 more tiny houses and hope to expand to another market this year.

“It’s a change to the vacation. It usually happens once a year for a few weeks and it’s expensive and you have to do a lot,” Staff said. “We used to have a mini vacation every day after 6 PM, but we don’t have that anymore. We hope we can all go away more often rather than once a year.”

Even outside his own obscure living arrangements, Getaway has a special place in his heart. Staff—whose background is in consumer products startups (e.g. Breathable Foods)—treasures having grown up around campfires in a 54-person town in northern Minnesota, but he’s concluded that lifestyle is better fit as an escape, for himself and most others, at least.

“I loved growing up in a rural area with campfires, and I love the city with art and music and culture,” he said.  “I hate the idea that you’re either a city or a country person.” 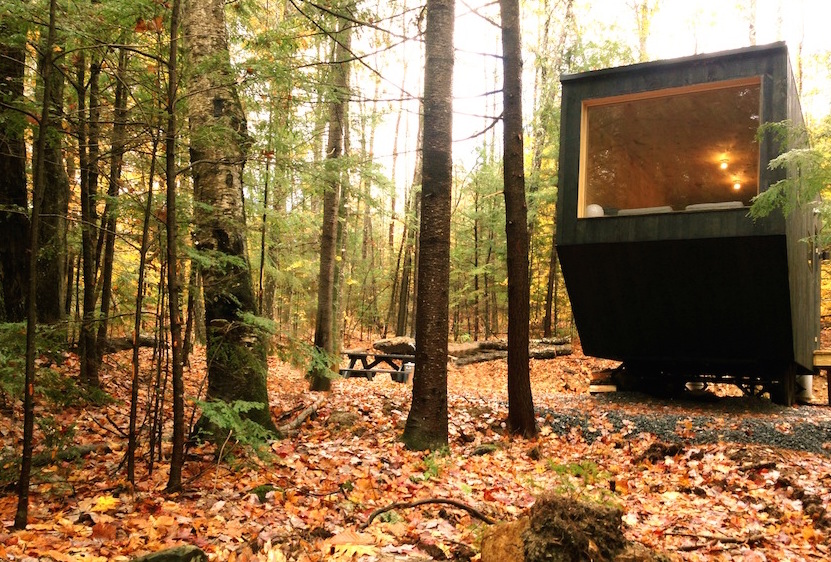