On March 14, Radiohead announced that tickets for its upcoming world tour (its first since 2012) would go on sale in four days at 10 a.m. and two of those tour dates, the headlines shouted at me, were on July 26 and July 27 at Madison Square Garden.

Radiohead is my favorite band of all time, but up until that moment when the possibility of seeing them perform live appeared, I hadn’t realized how much they meant to me.

I texted four close friends the news. Only one of them lived nearby, but I and the rest were willing to drive or fly several hundred miles to go to the show at $80 each. I told them I would buy them all tickets. “Can you buy another one for my girl?” my friend Chino Amobi, founder of NON records, asked.

“Of course,” I told him, “I just have to make sure to log on to Ticketmaster right when tickets go on sale and we’ll be O.K.”

Six of us now wanted to go and I thought that might be a tall order for one person, so I enlisted David from the group to help me purchase tickets. “I’ve never done this before,” He told me. “I’m really nervous.” I had heard about quick sellouts before, and thought all the tickets might be gone in an hour, but so long as we were quick and efficient with our typing we would be fine.

How wrong I was.

It’s a scenario common to anyone today trying to buy tickets to see a big-name band like Radiohead perform at an arena show.

I was in front of my laptop by 10 a.m. on March 18 ready to buy tickets. The first page I opened triggered a loading spiral, and then another, and another. When I finally got further into the buying process, I was confronted by captchas asking me to identify cows, pancakes and buses, among other things, before the screen stopped again. Twenty minutes had passed, and I felt defeated. I got on Twitter and found that tickets had sold out almost immediately and were already selling on Stubhub for multiple times the $80 value.

“It’s not true, this myth that increased competition will lead to lower ticket prices. The New York legislators bought into the lie of the ticket lobbyists.”

Even the band themselves expressed frustration. “I’m as fucked off as you are,” Thom York wrote on Twitter. “And I’m only human.” Later the band’s account wrote about the dangers of secondary ticket buying. “Many of the tickets will be named and stringent ID checks will be in place. You risk being refused entry to the venue.”

That was a risk I was willing to take when I started looking at re-sale prices on Stubhub and Craig’s list and asking my friends if they would be O.K. with paying $200 for middle-tier seats. By the time I convinced them to let me buy him the tickets, the prices had risen to about $250 for the lowest-priced seats available.

How is this legal? How could Ticketmaster’s captcha codes be so easily defeated? How could Stubhub and other sites so cavalierly sell tickets that were clearly obtained through nefarious means? What is wrong with this system?

It wasn’t always this way.

Until 2007, New York state had a 45 percent max cap (above listed ticket price) on ticket re-selling at large capacity venues. The law worked well when ticket selling was done in person, but the arrival of internet ticket sales changed everything. All ticket re-sellers had to do to skirt the law was to operate out of state, which meant their business operation could be as close as a 10-minute bus ride away in New Jersey.

On June 1 of 2007 Gov. Elliot Spitzer signed into law legislation that removed the limits on ticket re-selling that had existed since the 1920s and required ticket brokers to purchase licenses from the state to operate. The rationale was that the caps didn’t work and the spin given to the public was that the increased competition this would generate would actually lower ticket prices instead of raising them.

“It’s not true,” Russ Haven, legislative counsel at New York Public Interest Research Group, told me. “This myth that increased competition will lead to lower ticket prices. The New York legislators bought into the lie of the ticket lobbyists.”

One such group of lobbyists is the National Association of Ticket Brokers which says that allowing the free market to operate in the buying and selling of tickets is advantageous to consumers because it provides them choices. Translation: they believe that buying tickets (which they do) and taking them off the initial market (almost always Ticketmaster) actually helps people.

However, many ticket brokers are taking advantage of the free-market system.

Earlier this year the office of Eric Schneiderman, NY State attorney general, reached a settlement with six companies selling tickets in New York without a proper license. Five of them were using ticketing bots to illegally purchase tickets online at high speeds before consumers like myself could even log on.

“The only entity that actually knows if ticket buyers or brokers are circumventing the rules are the primary sellers of tickets.”

They also released a fairly damning report finding that on average 54 percent of ticket sales are reserved for ticket insiders and that venues never reveal how many tickets are available for sale. No wonder Schneirderman calls ticketing “a fixed game.”

Darnell Goldson of TicketNetwork, “an online marketplace that provides an outlet for buyers and sellers of tickets to live entertainment events,” referred me to Schneiderman’s report and called for venue transparency in ticket availability and supports legislation to provide consumers with this information. I asked him what responsibility his organization had to prevent the sale of tickets purchased by robots.

“TicketNetwork does not manufacture, purchase, hold or sell tickets. Therefore, it is impossible for us to determine whether or not a ticket is purchased by a bot. The only entity that actually knows if ticket buyers or brokers are circumventing the rules are the primary sellers of tickets.”

Who is the primary seller of tickets in this blame game? That would be Ticketmaster, the monolith that, as of 2009 when the company merged with Live Nation, controlled over 80 percent of the ticketing market.

What are they doing to address the robots that everyone seems to hate?

According to a 2013 New York Times report, bots have in some cases purchased more than 60 percent of the available tickets to popular shows: “Bots are not kicked off the system, but rather ‘speedbumped’—slowed down, sent to the end of the line or given some other means of interference, to allow a regular customer through.”

Ticketmaster has long been fighting robots by using paperless tickets for some shows which required the user to show or swipe their credit card at the door. This made tickets difficult to transfer, so of course Stubhub hated it and began warning everybody of the supposed dangers.

I was telling my mom about this story and she said, “I don’t understand why they allow this whole ticket re-sale business anyway. That seems like it’s the problem.”

No one else I talked to had any better answers.

Thinking about all this, I’m reminded of some lyrics from “Glass Eyes,” a song from Radiohead’s new hauntingly beautiful album A Moon Shaped Pool.

“And I’m wondering should I turn around/Buy another ticket/Panic is coming on strong.”

I don’t know if I’ll ever get to go to a Radiohead show, but at least now I know why. 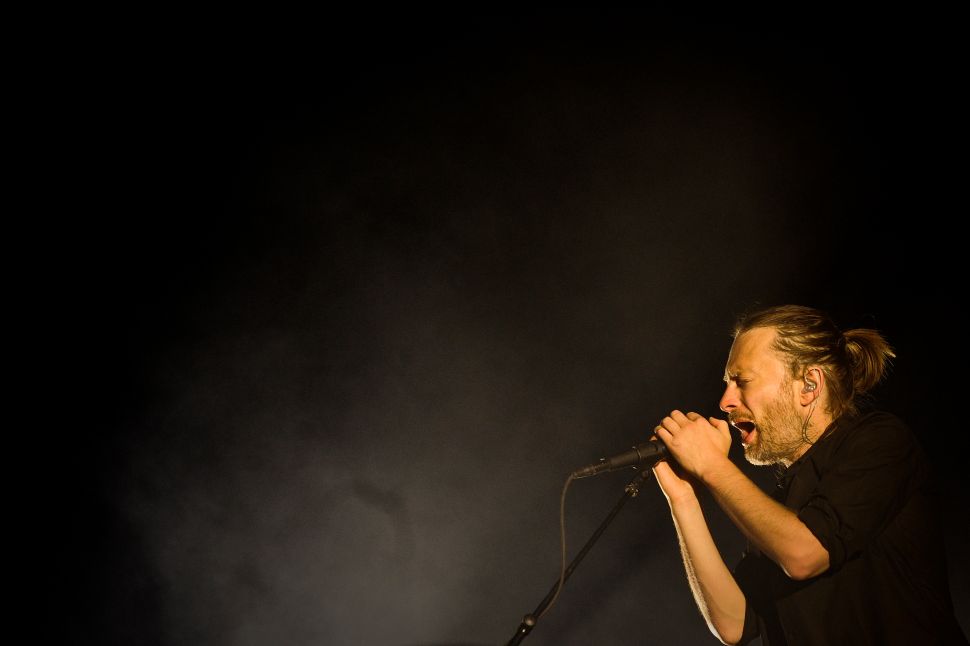