PHILADELPHIA—In accepting the nomination for vice president tonight, Virginia Sen. Tim Kaine slipped into the role of attack dog—albeit an unusually friendly one.

“To me, to me, it just seems like our nation it is just too great to put it in the hands of a slick-talking, empty-promisin’, self-promotin’ one-man wrecking crew,” Kaine said tonight.

In a lengthy speech that featured talk about his time as a Jesuit student, interludes of Spanish phrases, memories of governing Virginia and his time as a missionary in Hondorus, the main act was a lengthy attack on the Republican candidate as untrustworthy—punctuated by not-quite-spot-on impressions of Trump that led the instant pundit class of Twitter to immediately compare Kaine to a goofy dad.

But before he got to Trump, he spoke about trust in relation to Hillary Clinton—perhaps unsurprisingly given the Democratic nominee’s lagging poll numbers on trustworthiness. Kaine ticked off a series of reasons he trusted her, finishing with an emotional one: his son serves in the armed forces.

“I trust Hillary Clinton with our son’s life,” Kaine said.

Then, laying on the schtick, Kaine turned his attention to Trump.

“You cannot believe one word that comes out Donald Trump’s mouth,” Kaine continued to the crowd, prompting them to chant along with him. “Not one word.”

It was not all smooth sailing for Kaine, who has not been a popular pick with supporters of Sen. Bernie Sanders, who have sought to make themselves known repeatedly throughout the convention. When he emerged, several of them shouted about the Trans Pacific Partnership, a trade pact that Kaine supports and Sanders despises. Throughout the entire speech, people in the crowd—particularly in the California delegation—held aloft anti-TPP signs. 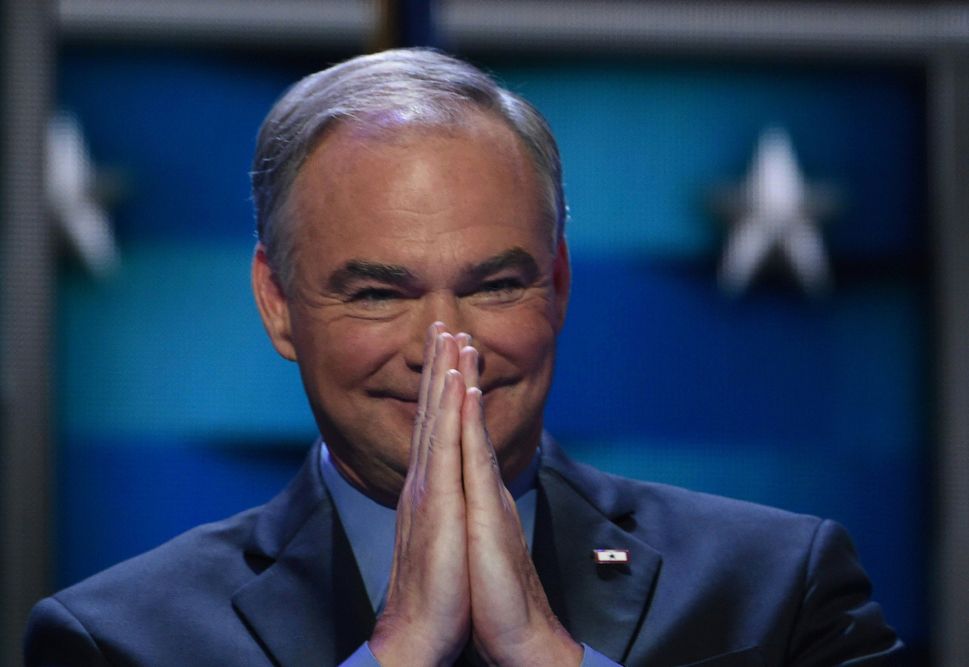