Donald Trump will be 2016’s Republican presidential candidate. He won the nomination by boldly and relentlessly addressing difficult political and social issues that his opponents preferred to either avoid or carefully finesse. He damned political and media hacks who run down America. When racist fanatics murdered cops Trump demanded law and order. A convincing plurality of Republican primary voters appreciated bold and relentless, supported law and order, and piled on the anti-American jerks who blame America.

That plurality gave Trump over 13 million votes—an all-time Republican presidential primary record. The number is a hard fact, one that Trump’s most bitter detractors cannot dismiss without loss of moral and intellectual integrity. To do so would wage War On Honesty.

Let’s stipulate that Trump is quite a character—a startling mix of flamboyance, authenticity and audacious savvy that America hasn’t seen since Teddy Roosevelt. Trump’s been on the planet seven decades. He may be a newbie to the game of national politics but he’s no newbie to the complexity of life. As a businessman he doesn’t have a record for hiring yes-men and yes-women (I refuse to write yes-people), which tells me Trump expects and values legitimate criticism and opposition. As president he’ll encounter such opposition on a daily basis. That’s America, folks—when America works. Disagreement and fruitful discussion help make a free America Great Again.

But bitter detractors dedicated to undermining Trump, despite his convincing primary win? That strikes me as another matter entirely.

Though the #NeverTrump movement within the Republican Party has faded, I doubt it has entirely succumbed. Based on what I read, Washington Post Writers Group columnist, baseball fan and conservative-approved-by-liberals George Will remains in NeverTrumpLand. It appears he intends to stay there. He may be constructing a bunker, or perhaps a compound.

In their fictional clashes, Neverland’s perpetually adolescent Peter Pan and his Lost Boys—no matter the sword play and dire straits—eventually bested the villainous Captain Hook and his pirate crew.

How wonderful escapist fiction, where pre-pubescents fly if they just believe.

But GetRealLand’s a bitch of a place, where you wake up and the accelerating whine you hear isn’t dream noise but an incoming 82 millimeter mortar round.

If Sore Losers tell themselves otherwise, in Washington Post op-eds, or over a glass of crisp Chablis, or in George Will’s demonstrably principled bunker—they’re waging War On Honesty.

Dole, who endorsed Jeb’s presidential candidacy until he withdrew from the race, told The Washington Post he is “really disappointed” by Jeb’s no-show. “I watched him [Bush] on TV going after Trump,” Dole said. “I mean, Trump was on the stage with him and Trump said some things that I know upset Jeb—but they did sign the pledge.”

The pledge to support the eventual Republican nominee. Dole also notes that he came to the 1988 convention after Jeb’s father, George H.W. Bush, defeated him in the presidential primaries. Even though Dole felt mistreated in 1988, the World War II vet shrugged it off. Bob—the flatland Kansas boy in ski-resort Coloradan 10th Mountain Division—got shredded in a Nazi minefield. No need to tell him about GetRealLand. He was not going to help Taxachusetts’ Democrat governor Michael Dukakis become President of the United States.

It appears Bush won’t honor his pledge. Gee, Governor, if that’s so, that’s waging War On Honesty. No wonder Senator Dole is disappointed in you.

“While he has no doubt tapped into the anxiety so prevalent in the United States today, I do not believe Donald Trump reflects the principles or inclusive legacy of the Republican Party. And I sincerely hope he doesn’t represent its future.”

Bush called for a coherent foreign policy. I’m down with that. Trump needs some help there.

But Jeb also called for an end to crony capitalism. That’s a bit jaw-dropping, sir. How can you call for ending crony capitalism and permit Hillary Clinton’s election? If that is your goal, Governor, wouldn’t it be more productive for you to go to Trump and say something—well, something like this: “Hey, Donald. I can help you with foreign policy specifics. Why, I think I can help you with U.S.-Mexico relations, if you’ll hear me out. I’m talking about team work. All you have to do is promise me we’ll root out crony capitalism. Four years of Crooked Hillary will corrupt our system. You’ve got to stop her.”

An adult gesture like this puts Donald on the spot, Jeb.

You do it and I’ll wager Dole’s disappointment disappears instantly. (Between you and me, Governor, Trump would benefit from an afternoon-long backgrounder on NATO. That said, let me give the mainstream media some context for my comment.  The entire U.S. security effort would be appreciably enhanced if Hillary Clinton served 10 years in jail for her gross negligence and failure to protect classified national security information.)

By now I’ve read at least four dozen essays by conservatives, libertarians and Republican stalwarts that seriously weigh Trump’s strengths and weaknesses. There are several themes—but I’ll summarize one I find most compelling.

Viscerally despising President Trump as a personality might be justifiable, Trump’s policy inclinations might well be bull-headed if not wrong-headed, and his flamboyant rhetoric may prove to be a diplomatic problem—but all of these dislikes, downsides and theoretical worries are far preferable to living under Clinton’s guaranteed lawless rule and demonstrated incompetence.

The American people don’t trust her. She combines a salacious scandal sheet with a criminal rap sheet. When she screams misogynist everyone knows she should be yelling at Bill.

Consider the speech delivered on the first night of the Republican National Convention by Patricia Smith, mother of Sean Smith who was slain in the September 11, 2012 assault by Islamist terrorists on the U.S. consulate in Benghazi, Libya.

“I blame Hillary Clinton personally for the death of my son. Personally, in an email to her daughter, Hillary Clinton blamed it on—shortly after the attack—terrorism, but when I saw Hillary Clinton, she lied to me and then called me a liar. Since then, I have repeatedly asked Hillary Clinton to ask [for] the real reason why my son is dead. I’m still waiting. Whenever I call the State Department, no one would speak to me because they say I am not a member of the immediate family… Sean was my son. Hillary Clinton is a woman, a mother, a grandmother of two. I am a woman, a mother, and a mother of two. How could she do this to me? How could she do this to any American family? Donald Trump is everything Hillary Clinton is not… He is blunt, direct, and strong. He speaks his mind and his heart. And when it comes to the threat posed by radical Islamic terrorism, he will not hesitate to kill the terrorist who threaten American lives…. He will make America stronger, not weaker… This entire campaign comes down to a single question: If Hillary Clinton can’t give us the truth, why should we give her the presidency?”

Trump might struggle in a crisis—might. In GetRealLand’s Benghazi bloodletting, Hillary Clinton was a total failure. And then she lied about it, insistently blaming a crackpot video when she knew the attack was the work of an Al Qaeda affiliate. Hillary Clinton waged a Total War On Honesty to protect Obama’s 2012 self-serving and totally false campaign claim that terrorism was waning and the tide of war receding.

Hey, Comey, you need intent to commit a crime to indict Crooked Hillary? Crooked Hillary intended to evade the Federal Records Act, bubba, and you know it. But rather than fight for truth you sold out The Rule Of Law, Mr. Director. Indeed you did, sir—you, a big time federal cop. Man, if you had any decency, any sense of shame, you’d donate your badge to the Salvation Army and spend two compensatory years as a Peace Corps volunteer digging latrines.

Now, Jeb, back to you. This is banana republic cronyism writ large, sir. All the snakes, the poisonous, the cowardly and the morons with paper credentials coil in one big government-media-academy tangle. Does this slithering morass disgust you, sir? I’m sure it does. So, don’t just damn it, do something about it. Quit your myopic funk and use your talents to rip that tangle apart.

Several of the four dozen essayists I read argued that the media will be on President Donald’s flamboyant posterior like 24/7 print, digital and video flies. See, President Trump’s a Republican so, after years of protecting Barack Obama’s Democratic derriere, the mainstream media can go Full Watergate and force President Donald to walk the line—or else.

The allusion to Johnny Cash’s fine song about avoiding entanglements with attractive women is explicit.

“I Walk The Line” leads to this aside: It is visually obvious Trump does not avoid entanglements with attractive women. Ignore the constant godless-puritanical caw caw of the Feminist Left. Knockout Trump Girls are a campaign asset and—I predict—a future global-diplomatic plus. Trump Girls will slay’em in Bejing. Moscow is vulnerable. Let me get pointy head for a sec, but pointy head with a point: Aristophanes Lysistrata (Athens opening night circa 411 BC) won’t work as policy. However, as an essay of deep human inclinations, the comedy is hard news, so to speak. Hard, frustrating news—from a heterosexual male soldier’s perspective. Are you with me here? If you’re not, follow the link…

The problem isn’t as much Trump as it is the national media, which thinks George Stephanopolus, Dan Rather, John Dickerson and the disappeared Candy Crowley are (or were) objective evaluators of information instead of Democratic Party operatives with a byline. Sheesh. National media types think The New York Times’ David Brooks is a conservative instead of a malleable gargoyle creature on the payroll of Versailles, DC.

Here’s the future history insight: Trump is doing America and the world a great service by refusing to capitulate to mainstream media narrative frames which not only cripple free speech and the open exchange of ideas by free people, but insult human intelligence. Early on Donald Trump identified the biased U.S. media as a threat to democracy because its heinous pro-Democrat slant wages War on Honesty.

Surber argues “People mistook his [Trump’s] extemporaneous speaking style for being undisciplined, but he had mastered speaking from an outline instead of a script.” Whatever happened, Trump continued to win “the news cycles” and he did so by “being newsworthy.”

Trump succeeded in doing something Republican strategists and campaign geniuses have failed to do since 1932: smack down an ideologically hostile press.

George Will says he is no longer a Republican. OK, he’s still a free man, he can choose. By Washington acclamation he’s an intellectual. But, when the stakes are weighed, Will is just another Lost Boy. 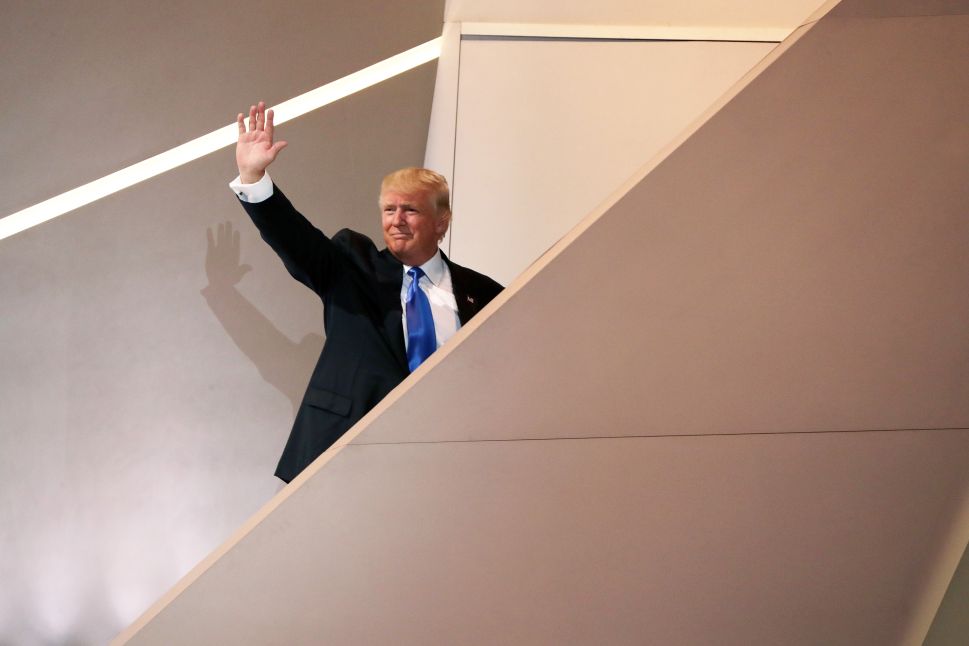