I’ll admit it: I’m no expert in podcasts. It’s a whole thing, apparently? I mean, I co-hosted one for a little while and I’ve yet to listen to any of the episodes. “Who has the time? When are you supposed to do it? I’m a New Yorker and like to multi-task efficiently! Also, there are so many of them! Not to mention, most podcasts should come with a trigger warning if you become enraged by people talking like they are better than you just because they took like 80 Xanax before doing their best Schweddy Balls impression. You aren’t better than me just because you know things and have personal anecdotes about stuff. YOU AREN’T BETTER THAN ME JUST BECAUSE YOU ARE CALM.  These were just some of the complaints about the medium in general. Like, Serial might have provided Adnan Syed with a new hearing, but how many MORE people had their life ruined because of reoccurring MailChimp nightmares?

But whoa boy, I just got back from a stint in Los Angeles, and let me tell you: podcasts are the best. The answer to the “when/where,” re: podcasts: “You are supposed to listen to them in your car, while driving, to avoid thinking about how you might die any second on the hairpin turns on Mulholland Drive (which really shouldn’t allow two-way traffic, considering!) and how Morissette-Ironic that would be, because you loved that movie SOOOOO much in high school.” The other answers to the frequent concerns about podcasts as a format is that you should listen mostly to comedy podcasts where people yell a lot–My favorite is Paul Scheer, June Diane Raphael and Jason Mantzoukas’ How Did This Get Made? It’s like Mystery Science Theater 3000, except about movies you’ve actually seen!–and ones that don’t force “facts” down your throat because they take place in an alternative reality. Fictional podcasts, if you will. (“Scripted podcasts” doesn’t work as a term here because a lot of non-fiction podcasts, like Serial, happen to be scripted.)

(Also, I get that there is some confusion in this title “fictional podcasts,” as it implies that it’s a podcast that takes place in an already-existing fictional universe from another medium, like Autopsy of a Crime, featured on this season of Scream . But let’s not get ahead of ourselves.) For the purpose of this post, the criteria include A) being an ACTUAL podcast, that one can listen to in real life (or the simulacrum of it during commute); B) That the podcast deal with events that have not actually occurred, C) that these events are treated as reality in the world of the podcast and D) that these stories be scary (optional). I just really like scary stuff, what can I say?

So, without further ado, here is my list of current favorite fictional podcasts, most of which are sort of scary, but not as much as, you know, real life.

1. Welcome to Night Vale, d’uh. Created in 2012–here in New York, of all places!– Night Vale may be the Alpha and Omega example of a fictional podcast. (A Prairie Home Companion doesn’t count, because of the aforementioned BLINDING RAGE STROKE that happens when I hear Garrison Keillor’s smug voice.) Broadcasting out of the fictional, titular desert town where strange lights appear in the night sky, Glow Orbs join the school board, dog parks remain unacknowledged (POSSIBLY FORBIDDEN!) and Angels are all named Erika, Night Vale is the perfect podcast for someone who loves David Lynch and hates learning about the secret history of some dumb person, place or thing that actually exists. Added bonus: Cecil Baldwin’s voice is the most perfect human voice ever created for a radio drama. (Also the book, co-written by Night Vale creators Joseph Fink and Jeffrey Cranor, is pretty spectacular. BUY IT NOW!)

2. Limetown. Here’s the show’s self-description, from its website, which pretty much gives you the vibe:

Ten years ago, over three hundred men, women and children disappeared from a small town in Tennessee, never to be heard from again.

In this seven-part podcast, American Public Radio host Lia Haddock asks the question once more, “What happened to the people of Limetown?”

My dad actually told me to listen to Limetown, with the somewhat bullshit caveat of “Maybe it’s real…OR IS IT?!”

Okay dad, calm down. It’s 2016, no one is falling for the Blair Witch Project just because it’s got itself a Squarespace sponsorship. Also, once you get past the first episode of Limetown–which is coming out with a second season!– it becomes pretty clear that this Serial-meets-Citizen Kane-esque format is just a really clever way of turning a plot straight out of The TommyKnockers into a semi-plausible conceit. (Editor’s note: Technically, that reference isn’t a spoiler, since I’ve contacted Limetown co-creator Zach Akers on Twitter and he claims to have never read that book. So there!) It’s also got a pretty creepy X-Files vibe, with undercurrents of alien sightings, government conspiracies and a very strange relationship between one man and a pig. (No, not like Black Mirror. Get your mind out of the gutter!)

3. The Bright Sessions. I give all the points for originality in formatting here: instead of an intrepid reporter and a hapless producer (basically the equivalent of the found footage horror genre, as I mentioned above), The Bright Sessions‘ conceit is that its a therapist who is secretly taping her appointments. And without giving anything away, I think it’s fair to say that Dr. Bright’s young patients are a pretty odd bunch. This is the podcast for you if you’re really into analysis (creator Lauren Shippen gives a shout-out after every episode to “psychotherapy consultant”/voice actor Elizabeth Laird) and the British show Misfits. Warning: any epiphanies occurring during The Bright Sessions are probably as illusionary as the show itself. But damn if it isn’t weirdly cathartic anyway!

4. The Black Tapes. Okay, so here is something I’m having a hard time figuring out: sometimes fictional podcasts will claim to be spinoffs of other networks that don’t really exist (see: Limetown’s “American Public Radio,” which sounds technically correct but isn’t a real thing) and speak to a backstory that’s just that: a story. But then there’s The Black Tapes, which is produced by Pacific Northwest Stories, which also is the source of our next entry, Tanis, but whether or not the PNWS actually existed on “terrestrial radio” somewhere up in Canada before moving to the Internet is…a question I’m sure I could answer with some Googling. But honestly, it’s July, we’re all tired, let’s just let the mystery remain a mystery. (Update: Naw, it’s totally fake. Thanks, REALITY.)

Oh yeah, The Black Tapes is like Limetown, except it starts out with a more Canadian X-Files premise of investigating a different unsolved paranormal case every episode, but quickly (in the two seasons that exist so far) reveals spooky connections between a brotherhood of possibly satanic monks, mental patients who can be in two places at once, demonic possessions, a Slenderman-type figure that steals young children and something called “The Unsound.” At the center of it all is podcaster Alex Reagan and her “enigmatic subject,” Dr. Richard Strand, who has a “mysterious past” (and yet is still the skeptic of the two).

5. Tanis. Okay, to be honest, I haven’t gotten very far in this one yet. But it’s promising so far: the premise is pretty simple. “What is Tanis?” It’s like…definitely something. We just don’t know what yet.

6. The Message. Produced by Panoply and GE Podcast Theater (which are both real things!), The Message is straight sci-fi, with some good ole-fashioned code-breaking thrown in for good measure. Unlike The Bright Sessions, which I can definitely tell definitely consulted a therapist to sound as plausible as possible, the adventures of Nicky Tomalin and her team at the Cypher Group could all be made up gobbledy-gook, for all I know. And that’s on me! What I’m saying is, this show could be the podcast equivalent of Primer and I still wouldn’t really be able to appreciate any of the schematics involved, because, once again, I’M NOT TRYING TO LEARN NEW THINGS.

7 + 8. We’re Alive and We’re Alive: Lockdown. The zombie apocalypse podcast and its subsequent spin-off series, that can be listened to as a companion piece or as a stand-alone show. (See how complicated this gets?) Perfect for people who love The Walking Dead but have to watch it with their hands over their eyes.

9 + 10. Alice Isn’t Dead and Within the Wires. Both are produced by the same people who brought you Welcome to Night Vale, and both take place (ostensibly?) in the same Lynchian universe that birthed them. Alice Isn’t Dead follows not only a non-journalist (for once!), but a lesbian truck driver, of all things, who is searching for her missing wife. She may not be dead! Unfortunately, a lot of things aren’t dead on this show…or they don’t stay that way for very long. This is like reading the Corinthian arc of The Sandman, and that’s all I’ll say about that. But also, way to recognize the market! Ninety percent of people currently listening to podcasts are, as I’ve mentioned, driving to or from somewhere at the moment. There’s a chance that it’s nighttime. It gets spooky along those roads. What a fun, immersive horror show you’ve just put yourself in the middle of! Don’t pull over for gas, you might literally disappear forever.

Within the Wires is my favorite take on the fictional podcast genre thus far, but it’s also the shortest: two episodes of weird self-help guru-ism meets meditation exercises meets technobabble meets insanity. And that’s only the tip of the iceberg! Who knows how far down this thing goes? 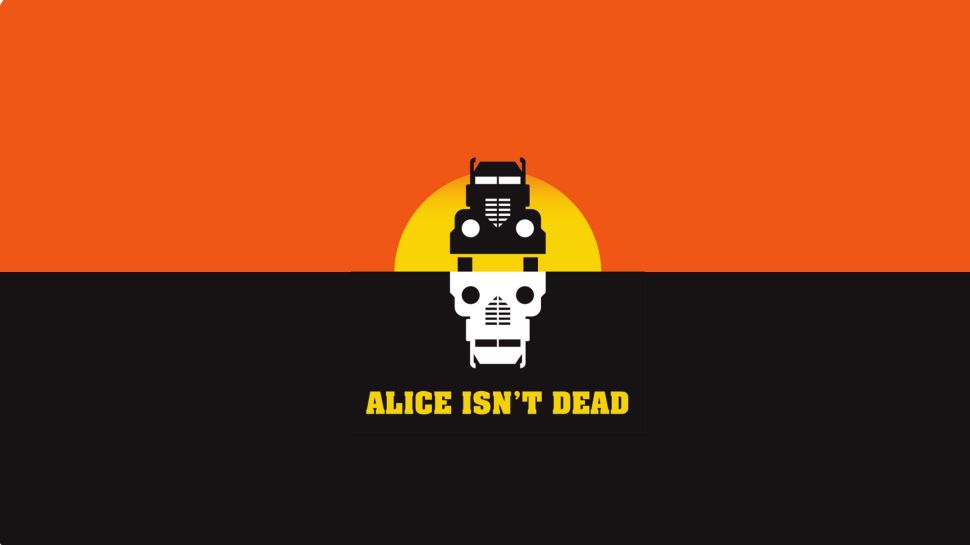