Monday’s episode of UnREAL is difficult to critique. The first three–fourths are standard UnREAL fare, but when Romeo gets shot in a plot point that seems almost fated, given the time of airing, the episode becomes more difficult to deal with.

“Ambush” kicks off with Adam appearing on the Everlasting set once more, under the pretense of guiding Darius. Of course, Quinn has solicited help from our favorite British suitor to seduce Rachel away from Coleman. Adam, glowing bright and orange (supposedly from the African sun, under which he’s been doing charity work, but my bet is a good dollop of Jergens), announces to Rachel that he misses her. They once loved each other, he says, and he wants to make it work. Rachel, on the other hand, is steadfast in wanting to stay with Coleman, despite the chemistry between herself and Adam. There’s a very odd heavy petting scene between the two former lovers, in which Adam unbuttons Rachel’s pants, yet the two never lock lips. Those Brits, always so reserved. It’s a particularly odd move, considering the last time Rachel got physical with Adam, the entire thing was filmed—because Everlasting is a reality show, and there are cameras everywhere. The girl doesn’t learn.

Coleman, meanwhile, is less than happy about Rachel’s exes and their seemingly perpetual presence on set. To be fair, she does have a limited social sphere. Darius, however, is even more miserable than Coleman. After a very staged gondola date with Chantal, the football player ends up with a mouthful of Chantal’s fiancée after she dramatically empties his ashes into the lake. Unfortunately for Darius, the fan providing a wind–swept look to the frame sweeps some ashes into his mouth. Understandably, Darius isn’t pleased.

After receiving a call from Darius, Romeo shows up, and Darius, Yael, Tiffany, and Romeo take off in the Bentley intended for Tiffany’s date. After apologizing to Coleman (and mentioning her plans for the two to get serious, both professionally and romantically), Rachel learns of Darius’s departure. Rather than panic, she calls the police on the missing car, sure that the ensuing interaction will be television worthy.

When Darius is eventually pulled over, the circumstances aren’t working in his favor. Tiffany is visibly intoxicated in the back seat, and Darius is driving without a license, or any identification. The cops insist that both Romeo and Darius exit the vehicle. When Rachel sees this from her and Coleman’s hiding spot in the bushes, she tries to amend the situation, but Coleman insists that they let the scene play out. However, when the police get physical with Romeo and Darius, Rachel rushes forward, startling a policeman who in turn grabs his firearm. In an attempt to stop the policeman from shooting Rachel, Romeo darts forward and catches the bullet instead.

UnREAL has always been more clever than perhaps it has been given credit for, subverting expectations about its content and cheekily winking at the viewer in doing so. Viewers know that the drama is manufactured on set, that producers like Rachel and Quinn painstakingly stage every fight and conflict. But should UnREAL fans dig a little deeper, they’d realize that the reality show landscape is but another tool to create drama, and that the viewers are perhaps the ones being manipulated into feeling or caring about something. In a way, UnREAL has made its viewers no better than Everlasting contestants—both slightly oblivious to the production magic that goes on just off-screen. It’s a smart paradox that always elevated UnREAL beyond its catchy logline. With this in mind, it’s hard to tell, at first watch, whether the Romeo shooting is just another plot line to generate drama and benefit from the fraught political climate or today—or whether it is a real stab at progressive television.

Romeo getting shot is certainly a socially relevant plot point—eerily so, considering the script was likely written and filmed weeks and weeks before Philandro Castile’s death. Undoubtedly, UnREAL writers had no clue how timely the episode would be. However, the episode is jam packed with other unrelated drama: Adam returning, Yael acting as a potential journalist or otherwise spy, and Rachel’s complete psychotic break. It feels almost wrong to include such an incendiary scene in what is otherwise a pretty typical UnREAL episode. However, once again, UnREAL is one step ahead.

Ultimately, this is another example of UnREAL’s magnificent penchant for slow–burning drama. Rachel has been touting around her self–righteousness all season, supremely proud of her groundbreaking work on the show’s first black suitor. She is constantly stuck between wanting to make shows that matter with Coleman and insisting that Everlasting is in fact a socially relevant program. Rachel’s pride in her work with Darius renders him (and all black characters on Everlasting, for that matter) a pawn. The black women on Everlasting are always meant to be crazy or off–putting, never wives. Darius is nothing more than a famous quarterback to most, and to Rachel, he’s the perfect way to delude herself into thinking that her work is meaningful.

The episode ends with Rachel being carted away to a psych ward, her complete mental breakdown complete. And when Jay, furious at Rachel, yells, “this isn’t your story to tell,” he is speaking both to Rachel as a producer and to television as a whole. Here, UnREAL recognizes that the shooting is not just another plot point, and it can’t be just another plot point. It subverts the structure of the episode as a whole, and it acknowledges the use of a black narrative as a means of dramatic conflict. Its self–awareness is almost chilling as “Ambush” magnificently blurs the lines between Everlasting as a show and UnREAL as a show.

It’s the strongest episode of the season thus far, and pushes UnREAL further towards being the most socially relevant show on television today. 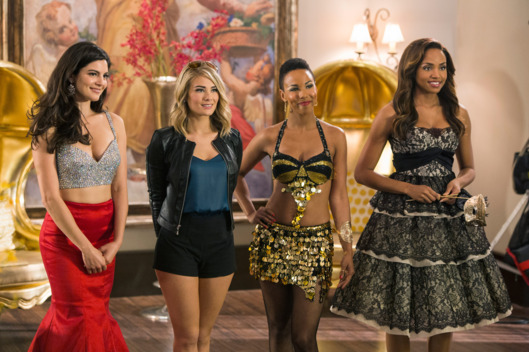