Policymakers need a refresher course on Afghanistan: Terrorists make their plans independently. They don’t follow the timetable of on-the-stump drawdown promises or primetime addresses by politicians. They don’t lay down the arms they feel Allah orders them to brandish to sit at a negotiating table with disbelievers or perceived puppet Muslim rulers. And they definitely aren’t just an armed insurgency as they blow up families.

Yet, while President Obama attributes his decision to keep steady troop levels in Afghanistan to “the realities of the world as it is,” he refuses to acknowledge that the Taliban are terrorists.

This, after all, would be admitting that the administration has made deals with terrorists, as evidenced by the swap of five Taliban commanders for Bowe Bergdahl in 2014—the year by which Obama pledged to leave Afghanistan.

“The Taliban is an armed insurgency. ISIL is a terrorist group. So we don’t make concessions to terrorist groups,” White House spokesman Eric Schultz said in January 2015.

The administration has yearned for Afghanistan to be wrapped up in a neat negotiations bow before Obama leaves office; and even after the latest bloody terrorist attacks, the White House ends up calling for a peace deal. Imagine the outcry if the administration called for Bangladesh to strike a deal with ISIS on a Sharia state after the Dhaka café attack.

As Israeli Prime Minister Benjamin Netanyahu is fond of noting about Iran, “If it looks like a duck, walks like a duck and quacks like a duck, then what is it? …It’s time the world started calling a duck a duck.”

Afghanistan’s duck kicked off the new year with a suicide bomber in Kabul blowing himself up at a French restaurant popular with foreigners. This duck sent a suicide bomber to detonate next to a bus full of journalists, and another to blow up a line of Afghan police recruits. In April, it waged the deadliest attack in the capital since 2011, killing civil servants in the morning and bombing the news station that reported on the attack in the evening. They murdered 11 members of one family in a May roadside bombing. At the end of that month, the Taliban set up a fake highway checkpoint to kidnap and kill civilians.

These attacks are just scratching the surface of Taliban crimes. In the most insulting twist of all, the Taliban has touted the work of their “Department for the Prevention of Civilian Casualties.”

The Taliban who banned television during their reign of terror have now embraced all of the modern means of spreading terrorist propaganda, from videos to radio to their website in Pashto, Dari, Arabic, Urdu and English that features news reports with grossly inflated body counts, official statements, op-eds and Distributed Denial of Service protection from a U.S. company.

The Special Inspector General for Afghanistan Reconstruction stated in its quarterly report to Congress this January that “the Taliban now controls more territory than at any time since 2001.”

In April, a spokesman for U.S. operations in Afghanistan said the Taliban were faring well with their opium poppy crop, and their old buddies al-Qaeda had established an “increased relationship” by which they’re sharing their “special skills” to make Taliban fighters “more effective.”

Obama trumpeted the May assassination of Taliban leader Akhtar Mohammad Mansour in his latest Afghanistan announcement but, within a few days of that drone hit, the Taliban seamlessly elected another leader. Haibatullah Akhundzada stressed that the Taliban will stay the course with no peace talks and a continued offensive. After all, they feel like they’re winning. Why should they give up?

“The Mujahideen have the same complete jihadist order, comprehensive organizational set-up and rock-hard and unbreakable unity,” the new leader said in his Eid al-Fitr message. “The same belief on the basis of which we started jihad years ago to implement Islamic Sharia is still vibrant.”

Obama said the United States “will continue to strongly support an Afghan-led reconciliation process” and called “on all countries in the region to end safe havens for militants and terrorists”—but accepting the Taliban automatically gives safe haven to terrorists, because that’s what they are and that’s how their friends and allies are designated.

Even Afghan President Ashraf Ghani, who avoided calling the Taliban “terrorists” in hopes of a settlement, unleashed the T-word for the first time in an April speech to parliament.

Yet the administration is insistent on the Taliban as negotiating partners. Maybe the deal with state sponsor of terror in Iran clouded the president’s judgment on what makes a reliable negotiating partner—but the continued vicious attacks on Afghans determined to moved forward from the medieval era of Taliban rule should underscore that. As the mantra goes, we don’t negotiate with terrorists.

And if you want to keep Afghanistan on a 21st century path toward free elections, increased women’s rights and free media—if you really want to shut off the spigot of any potential terrorist haven—you have to start by calling the Taliban what they are: terrorists.

Bridget Johnson is a fellow with the Haym Salomon Center. A veteran journalist, Johnson covers the Pentagon, the intelligence community and State Department. She’s a contributor at NPR and has worked for The Hill and the American Enterprise Institute before joining PJ Media as D.C. bureau chief. 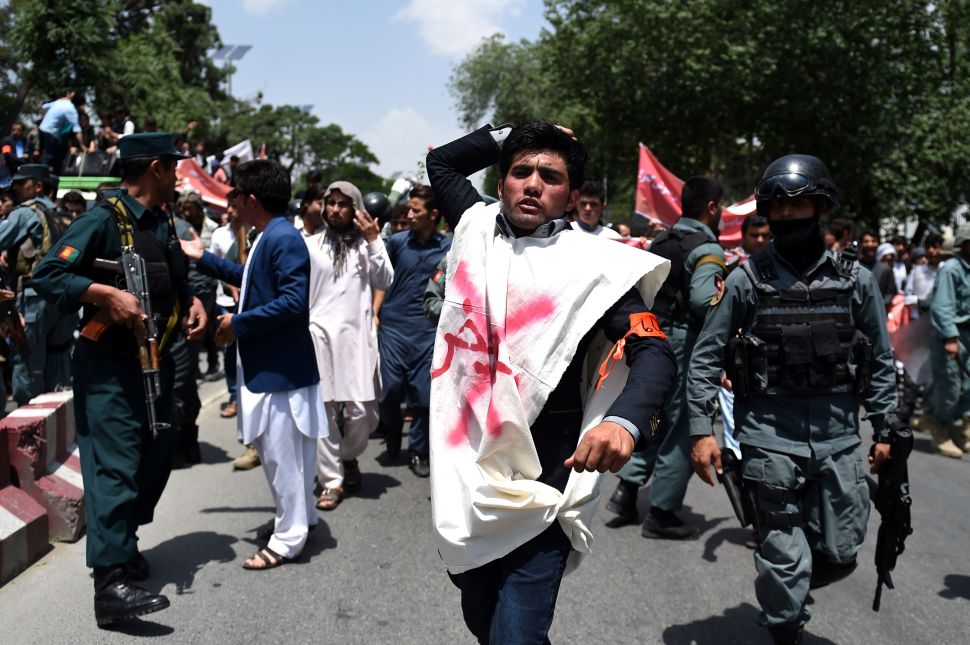