PHILADELPHIA—Much has been made of the gigantic four-mile wall that the security people have built to shield DNC attendees from the robust protests taking place throughout Philadelphia. Even People magazine noted that high-profile supporters of Bernie Sanders cannot get anywhere near the delegates they’re hoping to influence and several have been arrested trying to scale the 8-foot fence that rings not just the stadium proper, but a giant area outside the stadium.

According to the US Secret Service, it was a nearly unprecedented effort to shield convention-goers from the riffraff. Special Agent James Henry told NBC10.com that it would include “no-scale fencing to enclose the Wells Fargo Center and Xfinity Live!”

What may look like a boring story about securing an area during a naturally contentious event is of course irresistible because of the irony of the Democrats, who have made sport of Donald Trump’s focus on building a wall on America’s southern border, being protected by a wall surrounding their convention.

What has been less reported is the fact that as of Wednesday, a big wall got even bigger.

On Wednesday, after two days of strong protests — here’s video of a pretty angry protest involving Sanders supporters — I witnessed the northern border of the perimeter on Broad Street expand from just north of Hartranft Street all the way to just south of Packer Avenue, which expanded the security area approximately a thousand feet northward.

I asked the police who were building the additional fencing why they were expanding it. They told me it was none of my business, rather politely, considering we were steps from the home of where the Flyers earned their nickname, The Broad Street Bullies. But I spoke to two concessions employees who said they now had to board busses inside the secured zone rather than leave the secured zone to board their busses. Neither woman wanted to give her name because they’re strongly encouraged not to speak to the press, but both agreed on Wednesday afternoon that it was because protests in the parking lot had started to interfere with efficient shift changes.

According to Jonathan Wackrow, who served in the USSS on the President’s detail until retiring in 2014, the perimeter enlargement would be decided by the Secret Service. “They’re set up by committees, which are chaired by the Secret Service,” Wackrow told the Observer. “The decision on the protocol is done by the Secret Service based on an assessment of the changing situation. The decision to modify a security protocol is based upon a changing risk dynamic. Here [in Philadelphia] what you saw is the fencing obviously had some problems with people going over the fence so they need to push it out to allow for a greater standoff distance so they’re able to quickly intercept and solve that threat. … These situations are dynamic so the mitigation has to be equally dynamic. We went from peaceful protest to people climbing over out of malice and civil disobedience.”

As the convention season comes to a close, the DNC has produced an event that appears to the television viewer to be remarkably free of dissent or even disunity. The bigger trick is that it’s made it appear that way even to many attending the convention in person, simply by putting large physical distances between literal insiders and outsiders.

Wackrow said, “There’s always a balance between access to political activity and security. What we’re seeing here is people are not peacefully protesting. The moment that you make that leap over the fence, you’ve transcended into a different type of activity.”

The RNC had plenty of protestors as well – a car I was in was held up when the police told our driver that people were throwing plastic bags filled with portapotty waste at those walking and driving to the Quicken Loans Arena. But the fences there were much closer to the arena itself – protestors were able to be heard and felt by the attendees, which is the main point of protesting (in addition to getting on television, of course).

There’s at least one other difference between accessing the DNC and the RNC. The metal detector area at the DNC is mercifully air-conditioned. 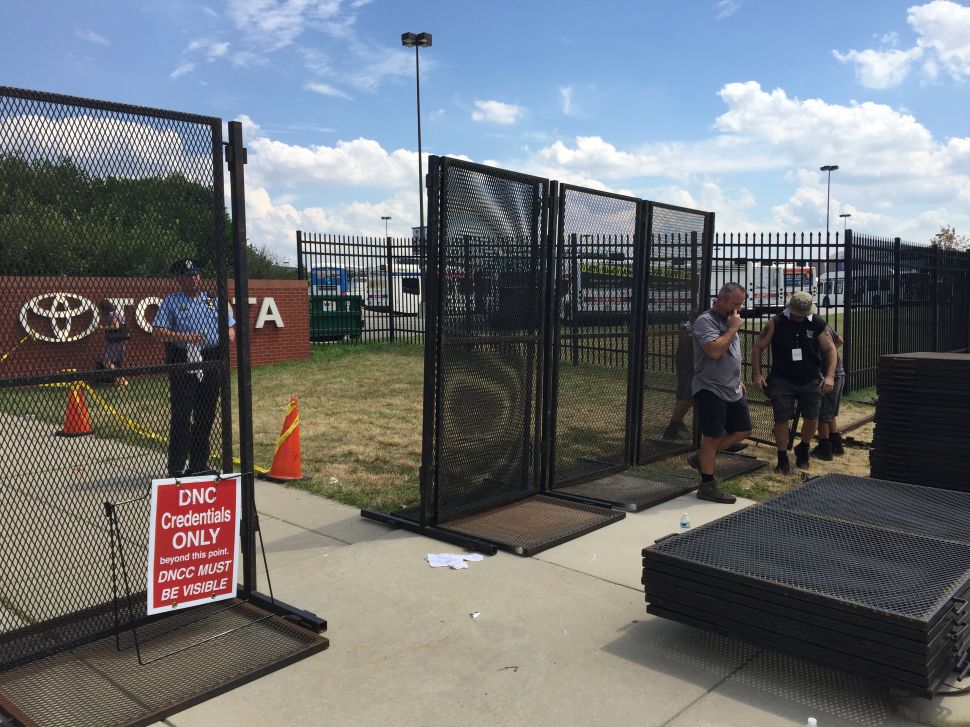