During an odd election year in which both major-party candidates have approval ratings somewhere on par with the Zika virus, many Americans are expressing the need for a third party.

With Democrat Hillary Clinton and Republican Donald Trump both hovering at or below 40 percent, it probably isn’t altogether surprising that voters might be clamoring for other options. A Wall Street Journal blog post from May showed 47 percent of registered voters would consider voting for a third-party candidate over either Clinton or Trump, well exceeding the 40 percent who had expressed interest in a third option in 2012. And various polls taken over the past year have shown upwards of 55-60 percent of survey respondents expressing a desire for a third major party.

And yet, while there has always been a share of the electorate that has expressed dissatisfaction with both the Democrats and the Republicans, the fact remains that third-party and independent candidates rarely exceed even one percent of the vote in presidential elections—and almost never win elected office at any other level. The rare off-brand presidential candidate who exceeds more than one percent—such as H. Ross Perot in 1992 (19 percent) and 1996 (eight percent), John Anderson in 1980 (six percent), and Ralph Nader in the wild 2000 election (exceeding two percent)—are considered notable exceptions. None of them even won a single state, all getting shut out in the all-important Electoral College that determines the president.

It seems clear that while many Americans like the idea of a third party in theory, very few are willing to actually vote for one.

So what does this tell us?

It seems clear that while many Americans like the idea of a third party in theory, very few are willing to actually vote for one. It isn’t as if we don’t have the opportunity to do so. Dozens of political parties already exist in America. Beyond the Democrats and the Republicans, who typically combine to win upwards of 98 percent of the national popular vote in presidential elections, three other parties (the Libertarian Party, the Green Party and the Constitution Party) possess official status in a majority of the states. Many more exist on a state or regional basis.

So where’s the disconnect between the voters who clamor for a third party but in the end still pull the lever for Team Blue or Team Red?

Perhaps the biggest reason why third parties don’t do better, at least at the presidential level, is the fact that our system, as designed by the founders, doesn’t really accommodate anything but a binary choice. In passing our current constitution in 1787, the Constitutional Convention created an Electoral College system that required a majority of electors, not a plurality, to win the presidency. If no presidential candidate receives more than half of the electoral votes, the president is chosen by the House of Representatives. This last occurred in 1824, at a time when both of the nation’s first major parties, the Federalists and the Democratic Republicans, had essentially dissolved, and four leading candidates split the votes such that nobody gained the required majority.

So there has been a tendency, over the years, for voters ultimately to come home to either the Democrats or the Republicans as the election draws near. We have seen in the past that when Americans are surveyed in the summer months of an election year, many talk about voting for somebody other than a Democrat or a Republican. About 13 percent of those surveyed told Gallup in 2012 they planned to support neither Barack Obama nor Mitt Romney, but in the end, only about 2 percent of voters followed up on that pledge. When it becomes clear that voters’ only real choice is between the Democrat and the Republican, most people don’t want to “waste” their votes on a candidate who has no chance to win.

Certainly another key reason that third parties and independents typically don’t do well is that the smaller parties and independents operate at a disadvantage. They often do not have the kind of automatic ballot access in states that the two major parties have, and they certainly do not have the kind of fundraising and organizational abilities that the major parties have. Smaller parties end up putting most of their meager resources into running presidential candidates, usually for a return on investment of less than 1 percent of the national vote, rather than building at the lower levels and fielding candidates for state and local offices.

But perhaps a more important question, rather than why these minor parties don’t do well, is whether the emergence of a third major party is even desirable all. Given the aforementioned necessity for a presidential candidate to win at least 270 electoral votes, as well as the need for majorities in Congress to pass legislation, do we really want a three-way split? How would the public react to the emergence of the House of Representatives as the selector of our presidents? And how, especially, would the public react to the very real possibility that the House, if controlled by the party whose presidential candidate placed second or third in the voting, selected that candidate for the job?

We can go back to the previously mentioned 1824 election for a hint. That year, Andrew Jackson led all candidates with 99 electoral votes and 41.4 percent of the popular vote. While the electoral vote was not a blowout—runner-up John Quincy Adams received the votes of 84 electors—Jackson won the popular vote by a landslide margin, defeating Adams by more than 10 percentage points. (For comparison, no president has won the popular vote by more than nine points in the last 32 years; a 10-point margin is considered a rout.)

Yet, when the election went into the House, it was the second-place finisher, Adams, who prevailed and became the nation’s sixth president. Backed by Speaker Henry Clay, who had placed fourth in the presidential election and was thus ineligible for the balloting, Adams won 13 of the 24 state delegations (each state gets one vote, regardless of population) and took the presidency, despite getting clobbered by Jackson among the nation’s voters. When Adams appointed Clay Secretary of State, Jackson supporters spent the next four years complaining of a “corrupt bargain.” Adams was never able to recover, had a largely ineffective presidency, and ultimately got wiped out by Jackson in their 1828 rematch.

One of the key results of the 1824 election, aside from the four years of national discord and the feeling by Jackson’s supporters that their man had been robbed of the presidency, was the forming of two new major parties: the Democrats, who have remained continuously in existence ever since, and the National Republicans, who soon afterward evolved into the Whigs and finally, in 1854, today’s Republican Party. Since the reestablishment of two stable major parties, no election has gone to the House of Representatives, although the elections of 1876 and 2000 (and some would add 1960 to that list) were close enough to end in extreme controversy, with some of the ramifications of the disputed 1876 and 2000 elections persisting to this day.

It also seems clear that it would be difficult to form an ideologically cohesive third party that could attract enough support to be viable. The disaffected liberals and conservatives, and true independents, who might form such a party are so far apart on so many issues that it would be virtually impossible to craft a third party’s ideology or platform. The Libertarian Party, founded in 1971, has attempted to market itself as socially liberal and fiscally conservative, but has never received more than 1.06% of the presidential vote or won very many offices at any level.

In the end analysis, it is hard to conclude that a third major party would be electorally viable, or even desirable. Even in multiparty, parliamentary democracies, two main parties typically predominate, with smaller parties only gaining any kind of power by operating in coalition with one of the major parties.

The bottom line is that no matter how many major parties may exist, a majority of electors and a majority of legislators is required to do business, and this fact inevitably leads to a liberal-vs.-conservative split. Whether we call it Democrats vs. Republicans, Greens vs. Libertarians, or Federalists vs. Anti-Federalists, we’ll never escape the two-party system. 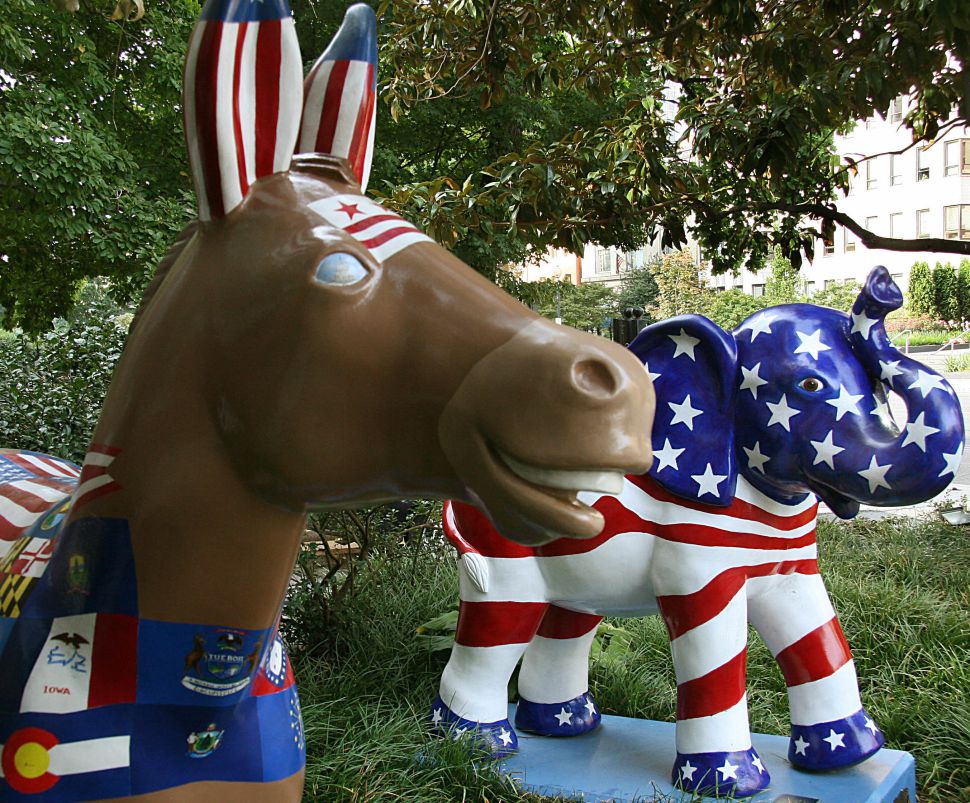