After the events of the last few weeks, it’s time to say what’s on my heart, and what our leaders are failing to say.

These men and women go out each day and night to do their job. They say goodbye to their families—as tens of thousands of officers do—to protect all of us. And they go to protect the Constitutional rights of others—even as many protest against them.

People in America are hurting, and right now there are no leaders who seem capable of listening.

When I trained with police officers after I came home from Iraq, I learned a great lesson from a fellow Navy SEAL, Lew, who was also training officers. Lew would ask the officers, “If I were to give you the Constitution of the United States of America—the original Constitution itself—and told you that you had to carry it across the city—how would you do it?” The officers would respond that they’d carry it with care. They’d carry it with courage. They’d be willing to give their lives to protect it. And Lew would say, “And that, of course, is how you must carry yourselves every day, because you are the Constitution in action.”

In Dallas, our officers went out to protect the constitutional rights of our citizens to assemble and protest in what should have been a peaceful way, but it became murder, an ambush, that terrorized an entire city. In Ballwin, a police officer was shot in the neck three times after stopping a vehicle for speeding. In Baton Rouge, police officers were again ambushed. Three officers have died; one is fighting for his life.

At times like this, our common cultural habit is to bemoan the tragedy, and then to do nothing about it. But inaction in trying times is simply a way of accepting what should be unacceptable to all of us. If we want a different outcome, then we have to take different action, and that action must be rooted in understanding. Part of the confusion of the present moment has been thrust upon us by a class of journalists who traffic in images of tragedy, but offer no thoughtful analysis of what we are watching. Their reporting is almost always historically uninformed, and frequently simply false.

The misreporting of “protest” started in our home state—Missouri—during Ferguson. This is simple: assaulting police officers is not protest. When thousands of rounds of live ammunition are fired—as they were at Ferguson—it is not a peaceful protest. Throwing Molotov cocktails is not what protesters do; it is what rioters do. When shops are burned, when bricks and bottles of urine are thrown at police officers, a protest is not ‘nonviolent’.

The division in America that our leaders have created and the media has exacerbated is dangerous and reckless.

As profound as the misunderstanding of “nonviolent” protest is, there is perhaps an even deeper misunderstanding of policing. Too few journalists have spent a single night riding shotgun in a tough neighborhood with a police officer. This is something that every American should do, but it should be a requirement for any journalist writing a story on law enforcement. Most of them have a profound misunderstanding of what it means to put on body armor and to wear a sidearm. They have little sense for what it is like to walk up to a car at 2am, or to knock on a door behind which you hear the screaming of a possibly violent domestic argument. They may have never had to fear for their lives, and so cannot comprehend what it is like to deal with a dozen encounters a day that may be your last.

And as ever, the people who suffer the most are our police officers and the people who most need their protection. St. Louis is now the murder, rape, robbery, and aggravated assault capital of the country. When and where police officers are supported, peace is possible. In places—such as St. Louis—where police have been systematically demonized, the people who pay the price are often the poorest and most vulnerable of our fellow citizens who most need protection. At times like this, people will inevitably call for action from the political class that will almost certainly fail. They will call for “gun control,” when the clear and compelling evidence is that such measures have no effect on crime, while active and capable policing saves lives. Look no further than Chicago, which has some of the toughest gun laws in the country, and where Chicago police officers, hounded by the ACLU for being “racist,” now have to fill out a two page, 70-field form that takes at least 30 minutes to complete and which they must turn into the ACLU every time they want to stop someone on the street. The result: fewer stops, which means that felons know that they can carry their guns with them wherever they go, which means that more children die in the crossfire. Good people can see things differently, but there are profound consequences when people who have no understanding of policing seek to impose simple solutions that have no connection to reality.

The division in America that our leaders have created and the media has exacerbated is dangerous and reckless. The ‘story’ they tell is simply that some law enforcement officers are racist or brutal, and that people “protest” against them. But of course, the idea of protest as it existed in the civil rights movement—when King and others protested the brutality of police officers who set dogs on peaceful marchers—is completely and utterly contradictory to the philosophy of many of the ‘protestors’ who fire weapons at, yell at, taunt, and threaten our police officers today.

At the heart of the civil rights movement was a very profound notion that while we are all imperfect, protesters could—by the purity of their example—call attention to injustice. At the heart of King’s philosophy, there was also a profound respect for the law. King knew that there can be just and unjust laws, and while purified protesters could call attention to unjust law, they could only do so by demonstrating profound respect for the law itself. King’s objective, after all, was not the undoing of law, but the creation of just law. King and his fellow leaders also understood that while we are all imperfect, we have a duty to love one another, including—and most importantly—loving the people we believe to be wrong.

In times like this, bad leaders often call for “dialogue.”

Today’s movement has brought nothing like that depth of understanding, nothing like that kind of compassion, and nothing like that kind of courage. Instead, in America since Ferguson, almost the exact opposite has happened. Today, the assumption at the root of many protests is simply that police are racist and brutal and must be “confronted”. Today, there is no obligation on the part of the protesters to pray for those who they think to be wrong. Today, protesters and students on college campuses are told to “speak truth to power.” The assumption behind this statement is that powerful people need to be corrected. That is often true. But the deeper, deadlier, and less examined assumption, is that the people who are “speaking truth” have no power at all. They are told to “speak truth to power,” but the point of the Civil Rights Movement, was of course that all people have power, and that power can only be fully realized through self-mastery, through faith, and through love expressed in action. Our goal should not be to speak truth to power, but to speak truth from power; and by doing so to make the world stronger and more honest.

In times like this, bad leaders often call for “dialogue.” The reason why you hear politicians and members of the media call for dialogue, is that they are professional talkers, and so they think that talk is far more important than it is. Talking together is good. Working together for good is better.

As citizens, it is our responsibility to fix this. Politicians have—and will—fail us. The media will move on. We have to do the work. So let us begin. Here are a few ways to start today:

1. Pray. Pray for the souls of the officers that gave their lives. Pray for their families. Pray for those who have been injured. Pray also for the courage and compassion to make ourselves stronger, so that we can make a difference.

2. Thank a police officer. Actually walk up to them today and in days and weeks and months and years ahead and shake their hands. Tell them that you appreciate them. The profession of policing is at its lowest point in decades. Many of my law enforcement friends have made analogies to the state of affairs when soldiers came home from Vietnam. Saying thank you matters; it matters a lot. Let them know that you understand that you and your family sleep soundly because men and women in blue are on patrol.

3. Get engaged. Volunteer. Tutor. Support. Sponsor. For all of the difficulties we face, there are still tremendous resources of courage, good sense, faith, and commitment in even our most struggling neighborhoods. Communities strengthen when people decide to strengthen them. It is true that we are failing a generation of young black children here in America. We can make progress here, not with shootings and looting, but with patient tutoring, shared service, faith, and deep friendships.

4. Donate today to one of the many law enforcement support organizations in your community or state. Our officers have given their lives. You can give some of your treasure to see that their memories live on, and that we honor them be strengthening the profession which they served.

5. Study. Read the Constitution. Read a “Letter form a Birmingham Jail.” Read a book on policing, or read one of a hundred stories about how community leaders are creatively and courageously solving problems in neighborhoods around the country. We are surrounded by stories of courage too infrequently told, too infrequently known.

6. Ride-a-long. Most police departments in the country have programs where they will take citizens out for a few hours or a night with a police officer. Do this. Your respect and appreciation for the men and women who keep us safe every night will grow immensely, and you will never again take for granted the sacrifices that our officers make for all of us.

Things can change. But they won’t change on their own. God Bless every officer and their families. God Bless every frustrated child—white, black, Asian, Hispanic—who wonders if the American Dream still applies to them. God Bless this country, and all who would work to make us better.

Eric Greitens is a candidate for Governor of Missouri. He is a NavySEAL, Rhodes Scholar, boxing champion, and humanitarian leader. The founder of The Mission Continues and the author of the New York Times best-seller The Heart and the Fist, Eric was named by Time magazine as one of the 100 most influential people. 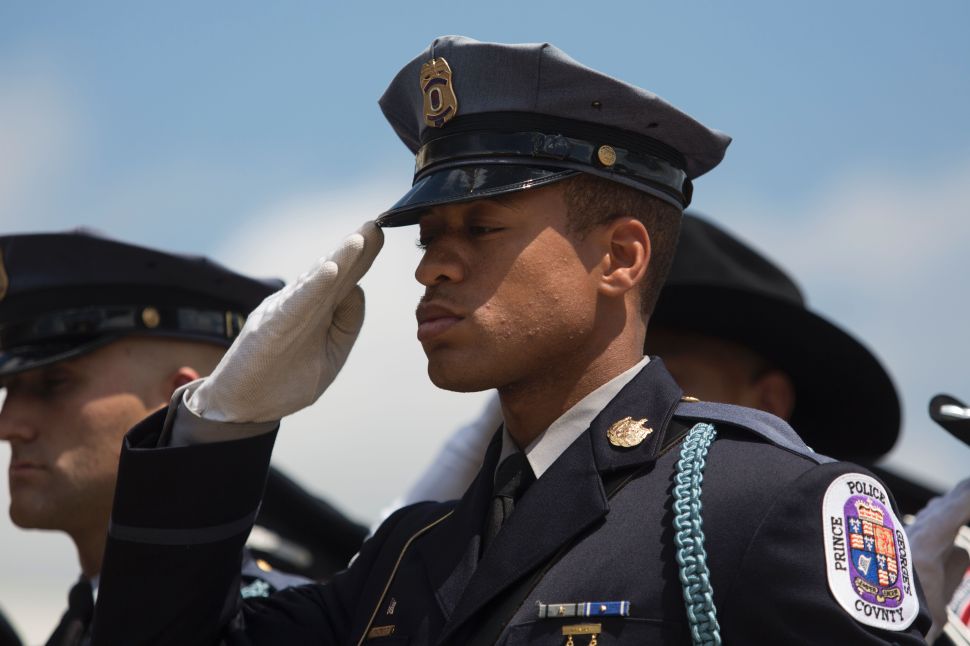